We Have Waited A Long Time For This Moment: Tons Of New 'Star Wars: Battlefront' Info

The wait is finally over: DICE finally gave 'Star Wars: Battlefront' a proper unveiling today, starting with a new trailer, embedded below, and joined by a glut of new details on the game from both their own panel at Celebration, and an Associated Press article about the game. For brevity's sake, let's just run 'em down one by one:

-The game releases November 17th.
-Current gen only (Xbox One, PS4, PC)
-Yes, you can switch from first to third-person.
-Multiplayer supports up to 40(!) players at once
--While we're pretty sure there will be others, at least two iconic characters will be playable: Vader and Boba Fett.
-The action will be taking place on four planets: Hoth, Endor, Tattooine, and oft-referenced/never-seen Sullust
-The game's content will be based strictly around the original trilogy. Nothing from the prequels.
-That said, the game will have free Day One DLC: The Battle of Jakku, which is meant to bridge 'Return of the Jedi' and 'The Force Awakens'. It reads pretty much like a last stand scenario, where the rebels corner what's left of the Empire on the desert planet that's been so prominent in all the 'Episode VII' footage so far. That beautiful derelict Star Destroyer in the new trailer? It's apparently a casualty of that battle.
-Folks who pre-order will get to play that DLC a week earlier than everybody else.
-Vehicles run the 'Star Wars' gamut from speeder bikes, AT-ATs to Tie Fighters and, as shown in the trailer, the Millennium Falcon.
-Sadly, no space battles this time around.
-Like the original 'Battlefront', there will be no campaign mode. However, there will be a series of standalone missions that can be tackled solo, or via online/local co-op.

And last but not least, here's the brand new trailer, which is apparently all in-engine footage, no bullshot. Whew. 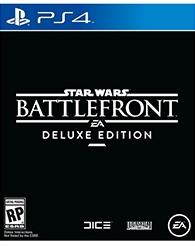 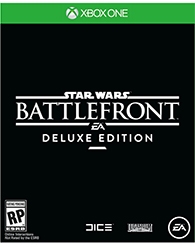