And Now, A Word About The State Of 'Final Fantasy XV'

With a set release date and a new demo, as you can probably guess, 'Final Fantasy XV' is coming along quite nicely, at least by director Hajime Tabata's standards. After the Uncovered event a while back, French site Jeux Video managed to get a sit-down with the director, and thanks to Dualshockers, who were kind enough to translate, we've got quite the collection of details on everything surrounding the game. The tl;dr version is this

--The game is mostly in a state of fine tuning now. It's already in the process of being localized, and the team is mostly finessing the thing in terms of framerate and balance. The framerate's probably the big one for right now. One of the few complaints about the Platinum demo was that it got a little jittery at points.

--Expect the game to go light on the cutscenes this time around. if you really need snazzy cutscenes out of your 'Final Fantasy', there's a perfectly fine looking star-studded CG movie for you in the form of 'Kingsglaive'.

--Yes, there's DLC coming, an official announcement for which will be made sometime this summer. Emphasis is being put on making "no ordinary DLC", something that will keep folks' enthusiasm up.  Long as it's not a lopped off paid ending, cool. 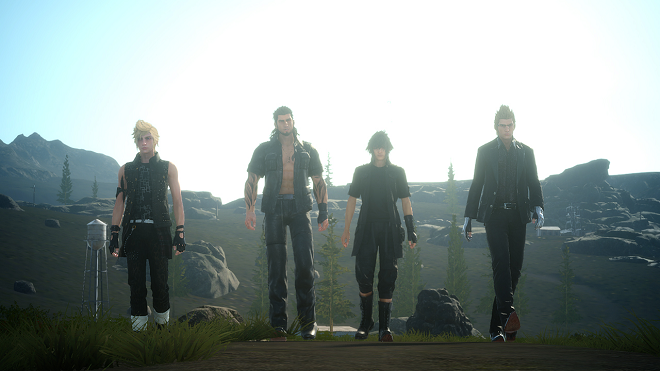 --Tabata would, indeed, like to do a PC version, but if they do it, they want to do it big, To do it, Tabata states the game would almost have to go back to square one to take full advantage of the best PC tech out there. No, the words Universal Windows Platform were not uttered once.

So, barring disaster, the state of 'FFXV' is strong, and looking like it'll be more than ready on its release date, which is nigh miraculous nowadays. Thank goodness. We've waited long enough for it.