Includes some workarounds for known issues.

As demonstrated by the rather massive changes implemented in the game's Day One patch, 'No Man's Sky' being as ambitious as it is means that Hello Games' work is far from done--though it must be said that fundamentally, this has been a smooth launch compared to how persistent online servers tend to go into nuclear meltdown on a high profile launch week.

Still, that doesn't mean Sean Murray and Co. are resting on their laurels this week. The game is launching on PC this afternoon, and the team has been hard at work getting that polished up, but they did take the time to acknowledge some of the bigger issues going on so far, and at least detail that they're getting the support infrastructure solid as a rock as we speak. 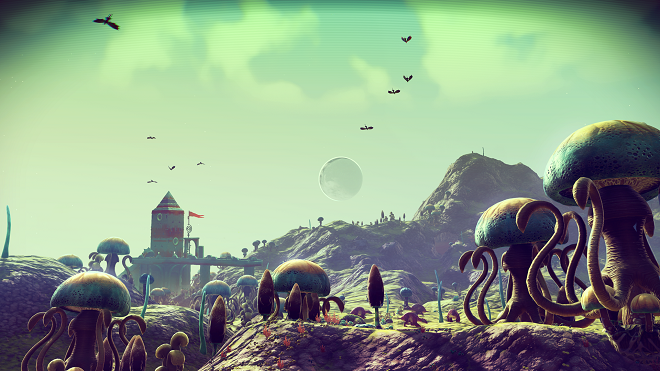 For starters, a new QA/support team is being added which, along with Sony's own in-house support who'll be handling a few things from their support site as well, will be collating all the problems to be found so far, for a patch that'll be issued in the very near future for PS4, once the PC launch is up and away.

For the time being, they're acknowledging a few of the smaller, but common problems. For starters, people are complaining about being stuck in one of the deep valleys in the game, unaware that pressing against a wall will give the option to jetpackvertically till they reach solid ground. Ships left in inaccessible areas--from personal experience, accidentally landing on a space cactus is an every day thing--can be summoned from landing pads and beacons at the abandoned question mark based scattered around planets. Alternately this, and most other glitches, can be taken care of just by reloading one of the two previous saves from the Options menu.

The big one at the moment seems to be that everything involving the pre-order bonus ship is borked, from the ship redeeming with the wrong name, to the ship leaving players stranded if they transfer/purchase a new ship that doesn't have a hyperdrive. For the most part, it seems like the game self-adjusts to fix it, by directing players to an NPC who'll just give them a new hyperdrive, but it may actually require a full restart of the system to trigger.

Either way, it does seem like Hello Games is on top of it, and doing it better than a lot of AAA developers, and with maybe a fraction of the average AAA development team. For anything they didn't catch, though, they're encouraging folks to email. Overall, still a rather heartening start to 'No Man's Sky'.