You Can, In Fact, Take The 'Sky' From Me: Sony And Hello Games Will Reset Saves for Early 'No Man's Sky' Players

Save wipe to prepare for Day One patch.

Copies of 'No Man's Sky' have been shipping out to stores the last few days, and because nobody can help opening their gifts before Christmas anymore, some less-than-scrupulous retailers have broken street date. Meaning, copies of the game are now out in the wild, for considerably less than $1300. Ordinarily, one could say that goes with the territory, but in the case of 'No Man's Sky', the Day One patch that goes live with the official street date is so extensive, the folks who dropped money for the game early are almost not playing the same game.

Well, according to a terse post on Twitter, it's no big deal, everybody will be on the same level soon enough. Hello Games will be wiping the game's online servers on Sunday. Meaning, any progress made in the game this weekend will go poof sometime tomorrow. That doesn't leave a whole lot of time to get a truly accurate impression of the game, but then, according to Sony and Hello Games, if you're playing it prior to the day-one patch, you won't be. 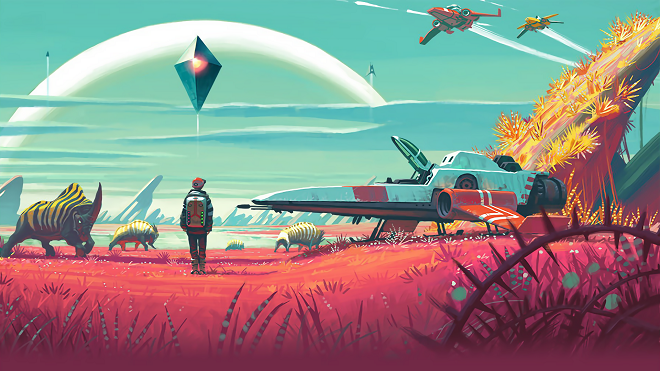 "'No Man’s Sky' is an ambitious game and the patch is a culmination of the studio’s day-one aspirations. Sending out early copies of the game prior to the patch would not be a fair depiction of the game as it’s intended for consumers. "

To wit, Hello Games has also announced that the game's release on PC will now be a global affair, dropping on August 12th, also stating that if they could, they'd probably drop the PS4 version a couple days later, but being shackled to retail makes that impossible. Still, for what it's worth at this juncture, most of the early folks have been positive on the game as it stands, citing the bugs (likely fixed by the patch), and some serious menu fatigue as being the only major, recurring gripes.