Press X To Jodie: Coming soon to a PS4 near you.

After months of teasing, Quantic Dream has finally made good on their promises to bring 'Beyond: Two Souls' and 'Heavy Rain' to PS4. In 'Beyond's case, that promise is about to be fulfilled a lot sooner than you might expect.

'Beyond: Two Souls' will be released digitally on the PSN next Tuesday, November 24th for $29.99. With it comes a nice little set of enhancements from its original version. As expected, it's taking technical advantage of the PS4, with the game being upgraded from 720p to 1080p, improvements being made to visual effects, and the DualShock 4's speaker will be utilized whenever you switch to play as your ghost friend, Aidan. The Advanced Experiments DLC, which was previously only in the Special Edition of the PS3 version, is also being included. 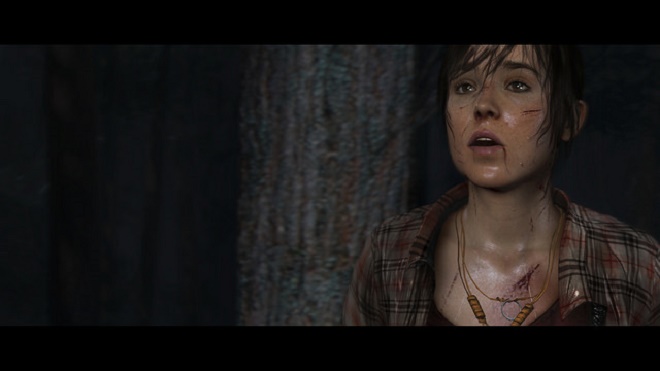 Like many newer adventure games, you will now have the option at the end of each scene of seeing how other people chose to handle each decision. The difficulty's been raised for some of the fight scenes, and controls have been improved. Probably the most interesting addition is that Quantic Dream's added the ability to play through the story in chronological order.

As for 'Heavy Rain', you'll have to wait a bit longer; It's hitting on March 1st. That said, if you're attending Playstation Experience next month, you'll be able to press X to Jason a lot sooner, since both 'Beyond' and 'Heavy Rain' will be playable there. No word on price, though no reason to expect 'Heavy Rain' wouldn't be the same price as 'Beyond', and Quantic Dream does mention that anyone who purchases 'Beyond' will be able to snatch up 'Heavy Rain' at a discount.

You can read our review of the original release of 'Beyond: Two Souls' here.