Curious About 'Bloodborne?' Then Come See the Darkbeast Boss Fight

Beware, this is spoiler territory.

'Souls' fans have large expectations for From Software's 'Bloodborne,' but so do a lot of players who have never touched a 'Souls' title. In today's update about the game, IGN and From Software have released footage from one of the game's bossfights, and boss fights have been such an important part of series that some may want avoid this footage due to its spoilerific nature.

Here is the boss in question: 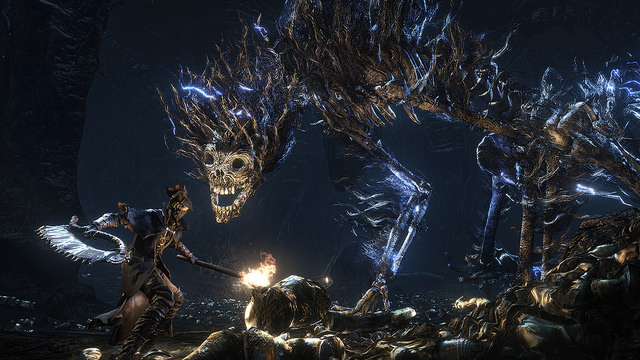 And here is the boss fight:

During the encounter, the boss uses its four legged nature to fill the arena and quickly reach the player whenever there is a lot of space between the two. The Darkbeast uses an electric area attack, meant to punish anyone who gets into the boss' vulnerable haunch area. Despite of liberal use of healting, the player is eventually overwhelmed by pure physical attacks from the boss. It's important to note that the boss' health never gets very low, which means his more aggressive form/attacks are not seen.

You can find the latest info on 'Bloodborne' linked from our Video Game Release Schedule.