Sony Announces a Collector's Edition, Release Date, and Pre-order Bonus for the PS4 Exclusive 'Bloodborne' Along With a New Trailer

Collector's Edition may be hard to come by.

Along with the announcement of a release date in a normally low-key month, Sony and From Software also shared a new trailer:

If that's not enough 'Bloodborne' news, then be aware, Sony has announced that there will be a 'Bloodborne Collector's Edition,' which is promised all only being available "in limited quantities," which for a From Software game, actually seems credible. The CE includes a Steelbook, art book featuring stunning concept art from the game, the complete soundtrack and of course the game disc. The Collector's Edition is priced at $79.99.

As of this writing the CE is not available to pre-order, but watch this space and get your order in once it's live. 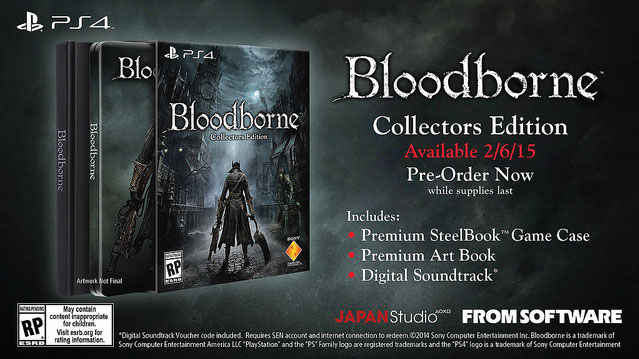 You can find the latest info on 'Bloodborne' linked from our Video Game Release Schedule.