While not as big as its big screen cousin, 'Star Wars: Battlefront' is coming, and those screen icons of the original trilogy are going to look a lot better rendered than in cinema.

First up is Leia Organa: 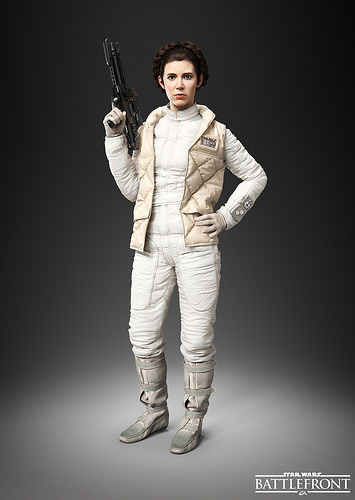 Leia is a character that succeeds through her fearless, strategic mind. We can all remember moments when her quick-thinking blaster fire helped the Rebels out of trouble. Our goal for all the Hero characters has been to capture their essence and spirit from the original Star Wars film trilogy, and then convey that through gameplay. Doing that is more straightforward with characters wielding Lightsabers and Force abilities; it’s obvious how to build gameplay around those things. Leia was trickier in that regard since she doesn’t have a specific, favorite weapon, so we had to represent her in another way.

It’s clear that Leia is a leader, so in Star Wars Battlefront she’s very much about support play, buffing team members, and holding positions. Furthermore, players spawning close to her will spawn as Alderaan Honor Guards.

Leia has a special Trooper Bane ability, which is used as a powerful offensive barrage (if it hits). She also has an Enhanced Squad Shield ability and can call in supply drops.

Next is Han Solo: 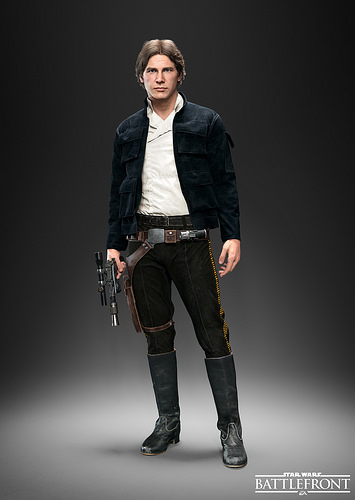 It’s been incredibly fun to work on Han Solo for Star Wars Battlefront. He’s such a likeable character, and turning his unique persona into gameplay features is a thrill when you’re a Star Wars fan. We’ve also witnessed the love for this character in our playtests. Han’s sardonic lines and emotes seem to put a smile on everyone’s face.

Gameplay-wise, Han Solo is a gunslinger mainly designed for lone wolves and, echoing the beginning of the original Star Wars trilogy, he’s not very dependent on others. Similar to a Rebel trooper, but with a greatly boosted arsenal, Han Solo might be the easiest Hero character to get into. Offensive output, damage, and mobility — that’s what this guy’s about.

Han Solo has a Rapid Fire attack ability, which lets the blaster be fired quickly without any kind of overheating. He also has a Lucky Shot ability that is good against vehicles and stormtroopers. And then there is Han Solo's Shoulder Charge, which apparently lets him charge in and out of battle quickly.

Finally, there is the villainous Emperor Palpatine: 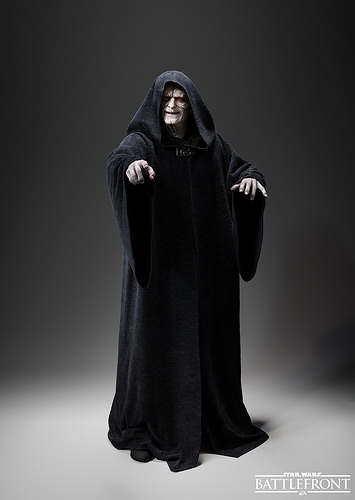 Based on how he’s been characterized and how he plays, Emperor Palpatine might be my personal favorite character in Star Wars Battlefront. But getting to that point has been a challenge. We wanted many different things with the Emperor.

We wanted him to be very mobile, but also about deception and fooling people that he’s fragile and weak. As you’ve seen in the original Star Wars trilogy, Palpatine pretends to be a weak old man, when he in fact is extremely powerful. That two-faced side was something we wanted to convey in gameplay and the Emperor’s abilities.

Palpatine uses Force Lightning as a main attack, and Chain Lightning is also part of the equation. Palpatine can move quickly via Force Dash. Palpatine also has a connect which lets him aid his allies via power-ups.