Get those PS4 USB ports ready.

After multiple betas, shows, character announcements, costumes reveals, controversy, and just about anything else that Capcom can think of to stoke excitement for 'Street Fighter V,' the anticipation level is extremely high. In some ways, 'SFV' may be more eagerly awaited than the original 'Street Fighter IV,' a game which seemed to reignite a lost genre. With the new game nearly ready, Mad Catz has a whole lineup of FightSticks and a FightPad set to debut with the game. 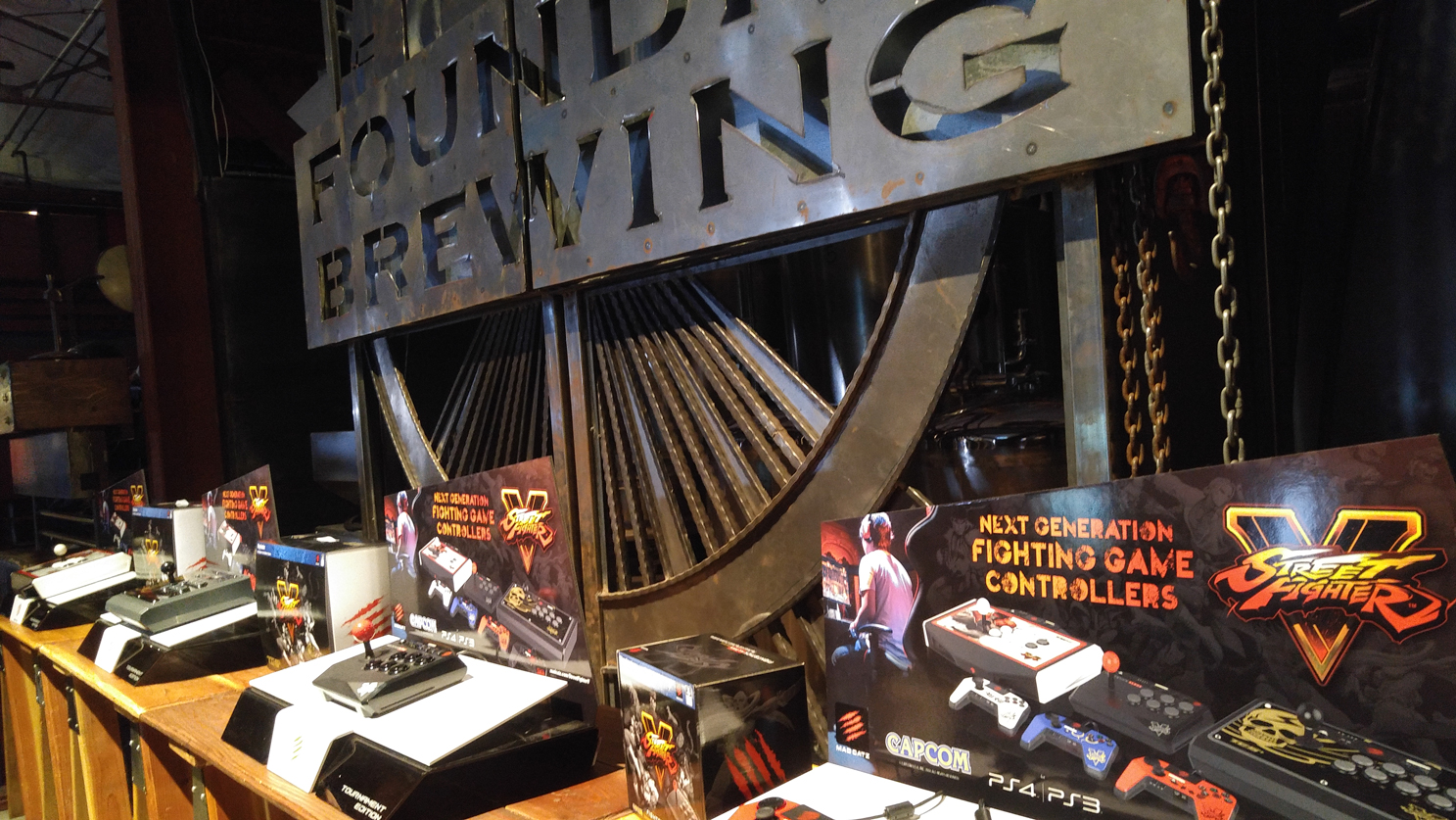 When Mad Catz invited me to visit San Francisco, the agenda was pretty clear, get hands-on with the new FightSticks and FightPad. Along with checking out the new hardware, there came some bonuses, First, there would be time with a near final build of 'Street Fighter V.' Second, there would be an intermingled group of fighting game pros on-hand battling in 'Street Fighter V' for the Mad Catz Cup.

So before I break-down the four new peripherals, I want a talk a little 'SFV.' I was heavy into 'SFIV' & 'SSFIV,' but it's been a couple of years since I played regularly. To prepare for this event, I fired up the PS One Classic version of 'Street Alpha 3' on my Vita. This was on the plane ride over, and the 'Street Fighter X Tekken' decided it didn't want to work without the internet. At any rate, with characters like R. Mika and Birdie in the middle of a packed roster, it's not a bad warm-up, and that's even with the Vita controls. 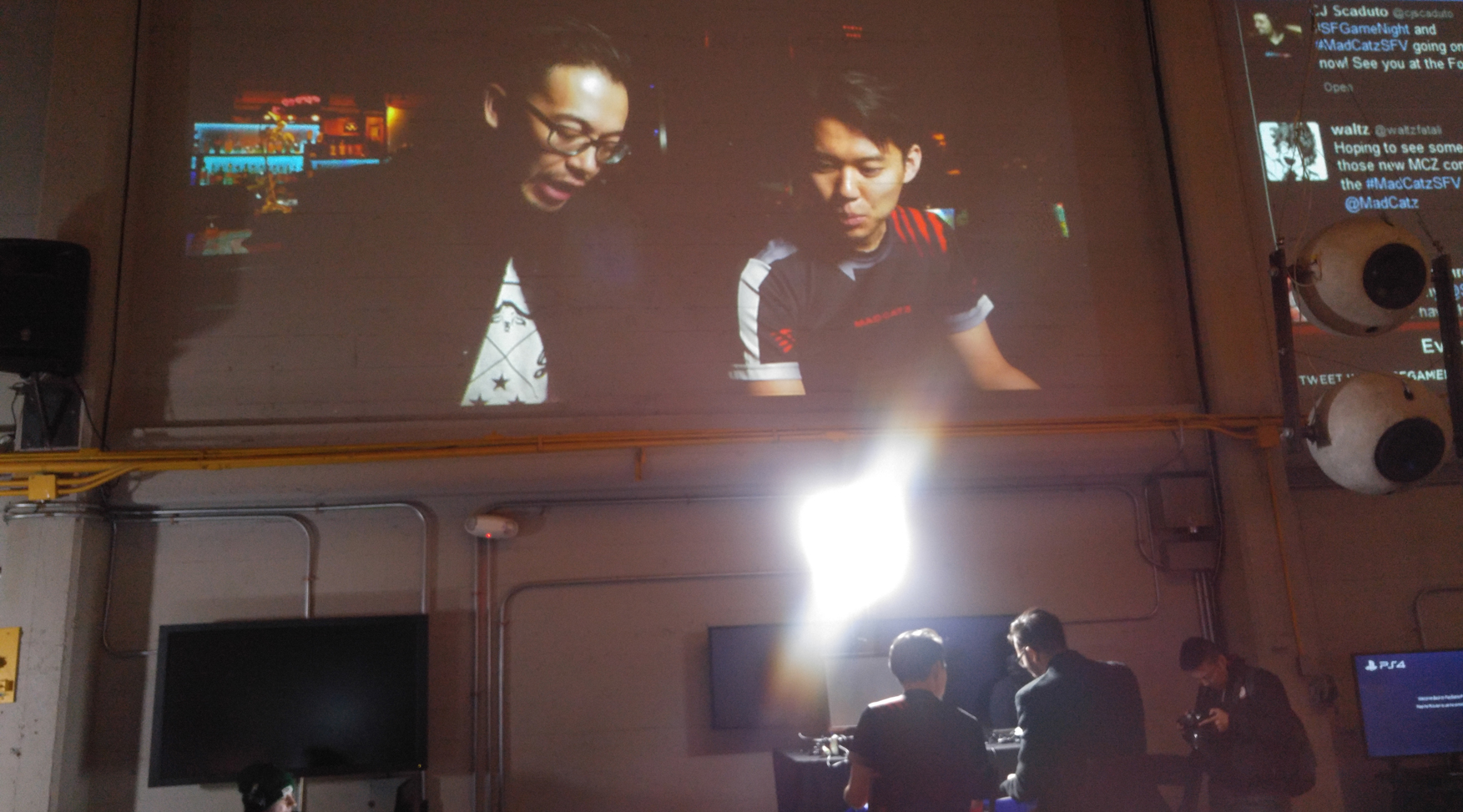 Fast forward to the event, and nearly any 'Street Fighter' fan could have predicted some of the tendencies of the press, the pros, and everyone else who was there. Some players gravitated to characters that are new or newly returned, while others sought their old standbys, and tried to pull off their long-practiced set-ups. For myself, I stuck to mostly playing R. Mika and Nicalli. Basically, I was trying to play as R. Mika, and my opponents skewed towards Birdie, Dhaslim, and of course, Ryu/Ken. I refused to play as Ryu/Ken though I did accidentally wind up playing Chun-Li once. R. Mika needs to get in close, which makes Birdie and Dhaslim pretty annoying (but not impossible) to fight. Thus, I would switch to Nicalli, whose powerful blows tend to shake things up. Elsewhere, especially with the pros, Nash and Zangief were also quite popular.

The competition that night came down to Peter Rosos, aka COMBOFIEND, using Laura to shut down Mike Ross' impressive Birdie run. No doubt , Laura is a capable fighter, and anyone who learns even just her basic moves, like the slow EX fireball, will be in a good position to dazzle opponents online.

In case it's not obvious, this in-depth time with the game, and with a motley mix of other players of varying levels indicates strongly that 'SFV' in its launch form will be an event to attract players from all over the gaming spectrum. Anyone looking for one of those generation-defining games ought to have 'SFV' on the PS4 and PC front and center.

Ever since Mad Catz started talking 'Street Fighter V,' I've been looking forward to seeing some new sticks. Once the lineup was revealed, the natural question became the Tournament Edition 2+ or Tournament Edition S+? In spite of my early conclusions, the answer to that question is not as easy as I thought it would be. Likewise, I was surprised to find out that both the FightStick Alpha and FightPad Pro are much smarter products than I had previously thought. 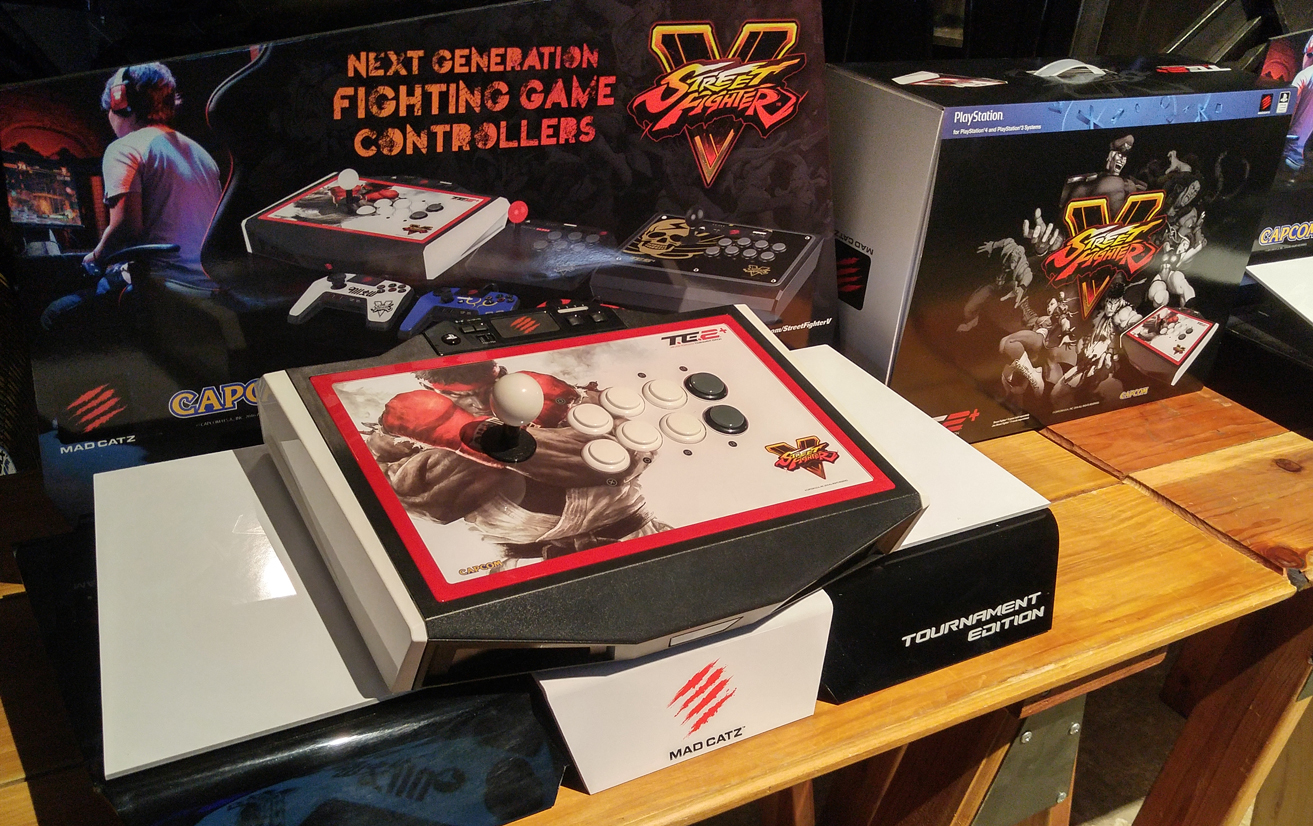 The Tournament Edition 2+ is the flagship stick. Packed with features, the TE2+ has a beautiful enclosure that harkens back the original TE stick. The new stick has an extremely mod-friendly enclosure that pops open via a button the front. It has a detachable USB cable, carry strap grommets, Sanwa Denshi buttons (ten in total) and stick. The stick has a squarish gate that is a snap to change if need be. The stick has switch that makes it more friendly to either a PS3 or PS4. (This is important for the Home button.) It's also PC compatible. A three position switch lets the lone stick function for either left or right analog stick or even the d-pad. Much like the buttons and stick, the artwork is easy to change. There is also a button that locks the top controls, which should prevent the user from accidentally hitting the PS or Share button. In contrast to other recent Mad Catz sticks, there is a PS4 specific touchpad, which along with the L3 and R3 buttons, should help make this stick as compatible as can be. 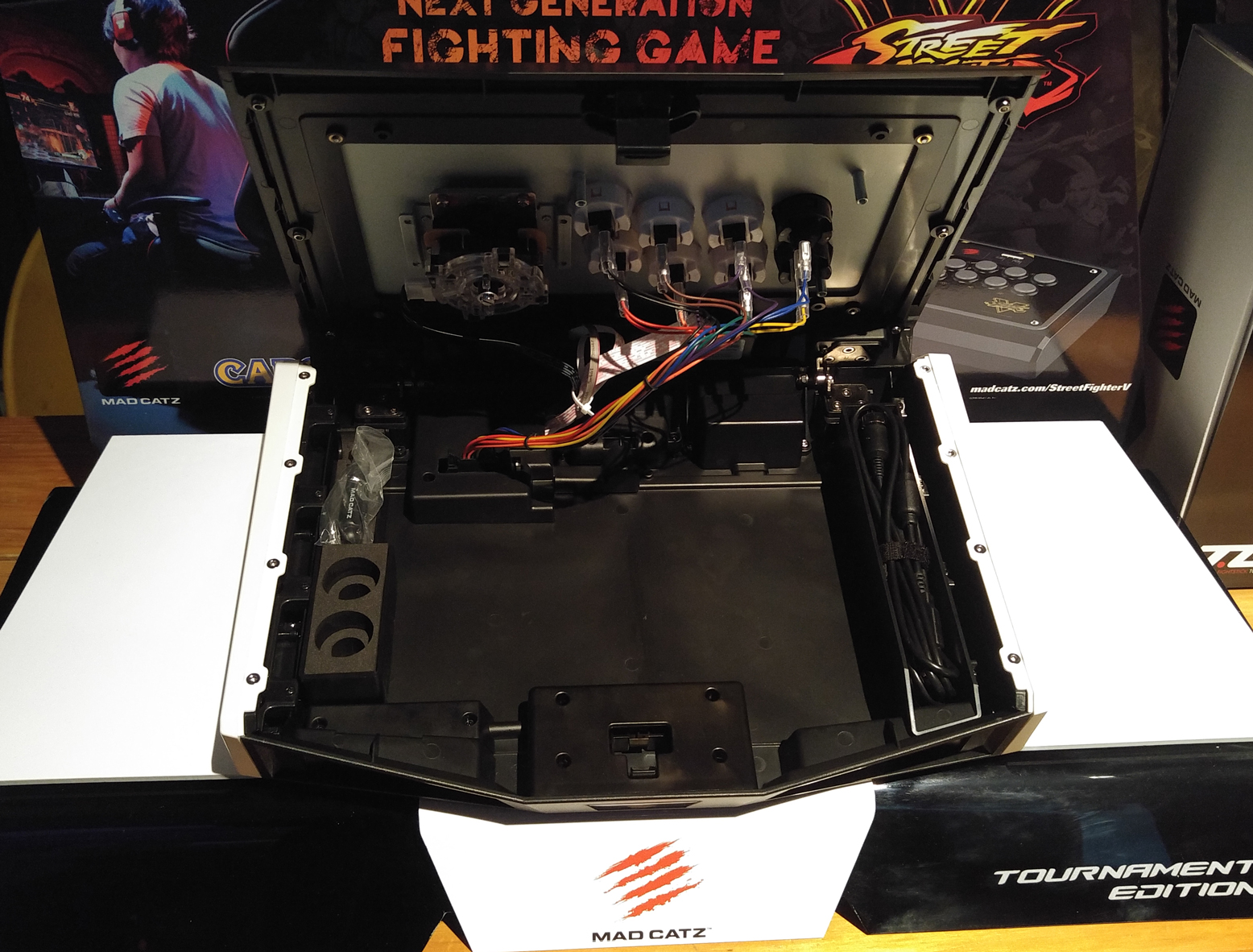 This stick is a licensed PlayStation product, and indeed, it seems like Sony was the one really pushing for touchpad inclusion. The upside is that if any fighting game, like say 'Guilty Gear Xrd -SIGN-,' uses the touchpad, it's there. It's quite likely that 'SFV,' like the PS3 'Street Fighter' games, will need those extra buttons when in the training modes. (I don't expect the touchpad to do anything during actual matches.) 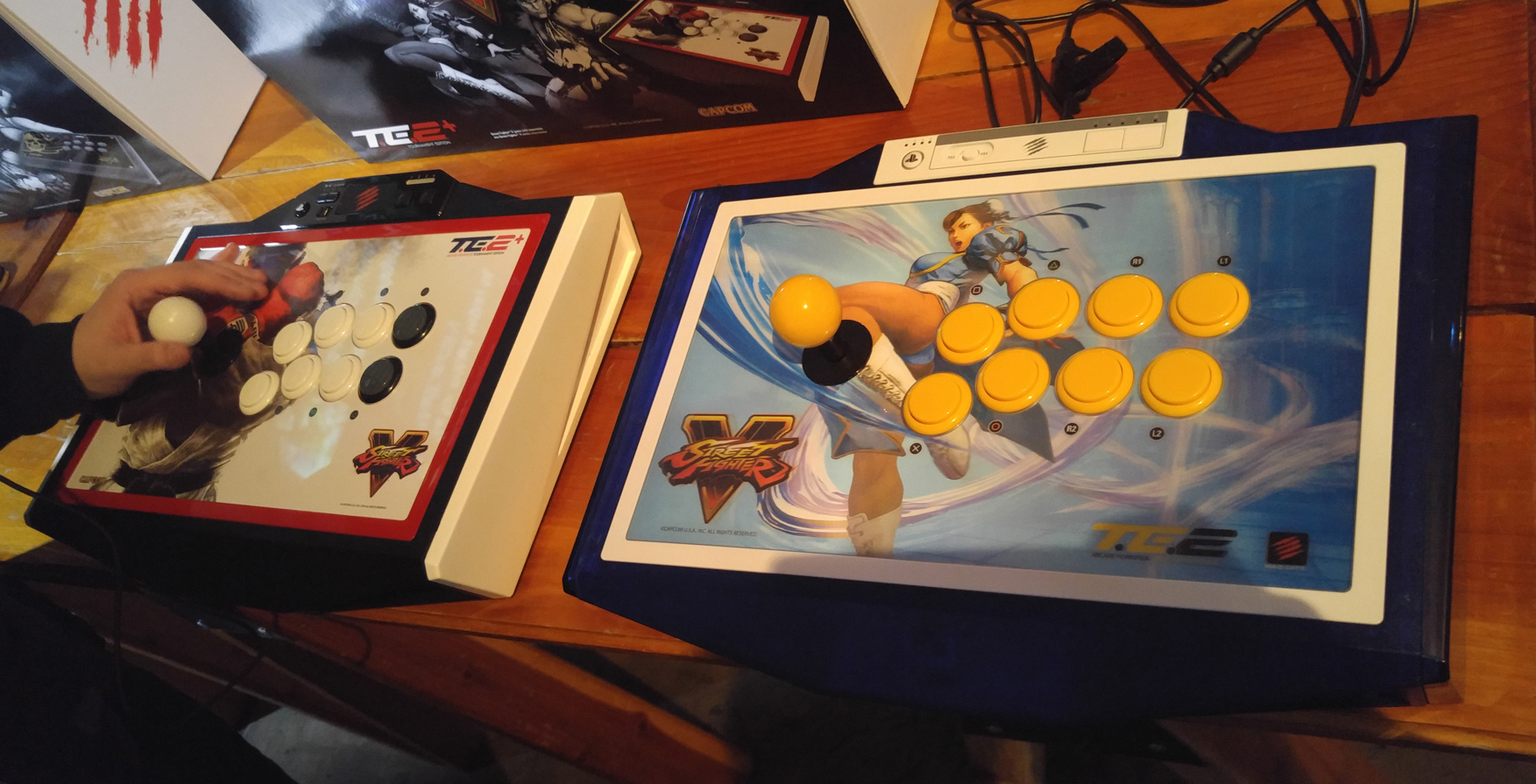 This is a great stick. Unless the player just has a fundamental objection to the fatigueless action of the Sanwa Denshi buttons and stick, there's little to quibble over there. The control lock button proved useful in the event setting, and it's a good feature to have. (There are more controls now that can be problematic if pressed. For example, the share button.) Without more personal testing, it's hard to rate the PCB or even how the stick feels in different games on the PS4, PS3, and PC. What might stop a full recommendation for this stick though are the possibilities raised by the rest of the line, which appear below. Likewise, for those who recently picked up a TE2 Chun-Li, there's doesn't seem to be anything, including the touchpad, to warrant buying a TE2+. 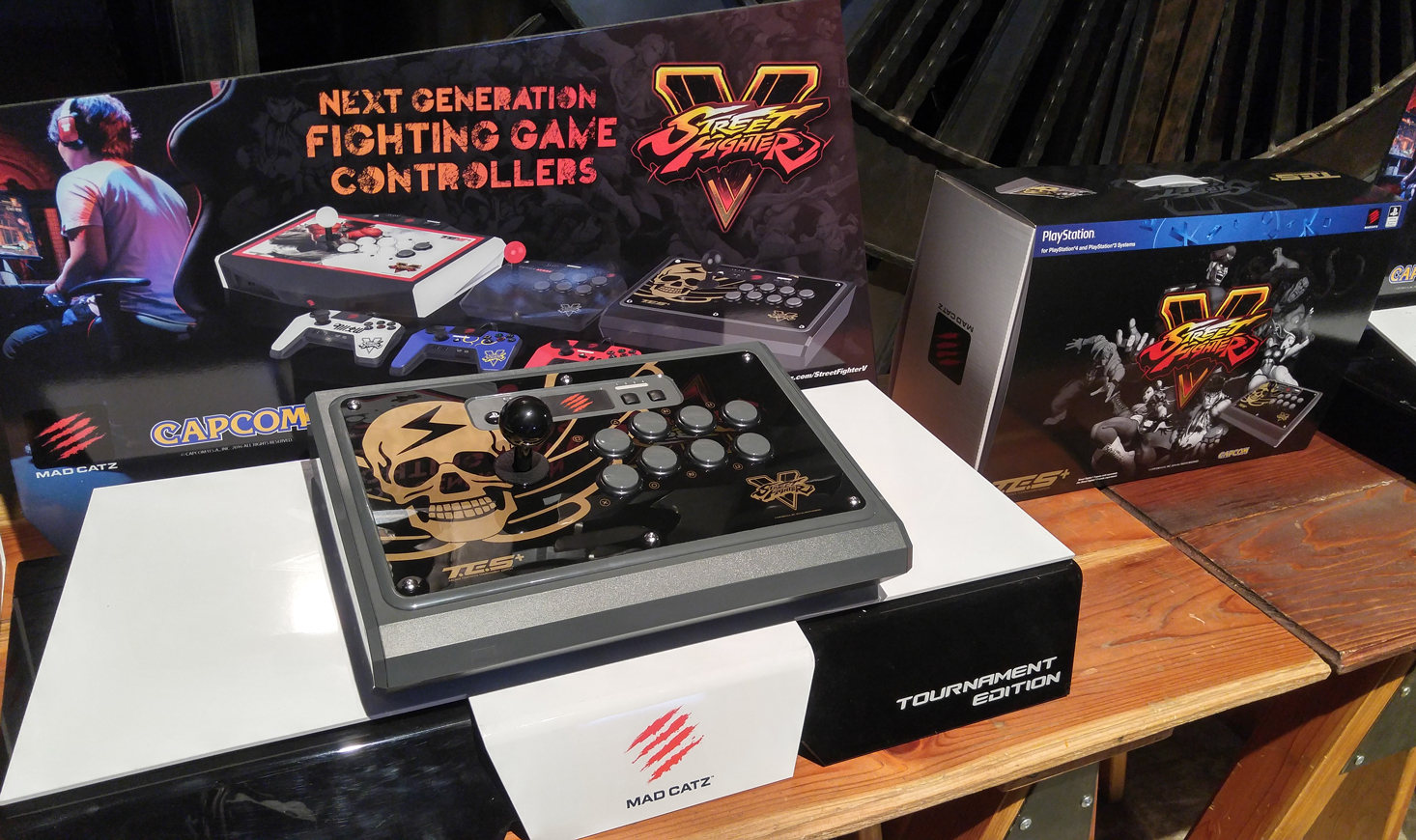 This is also the stick to expect at tournaments, and it was the stick that the Mad Catz Cup players were using. 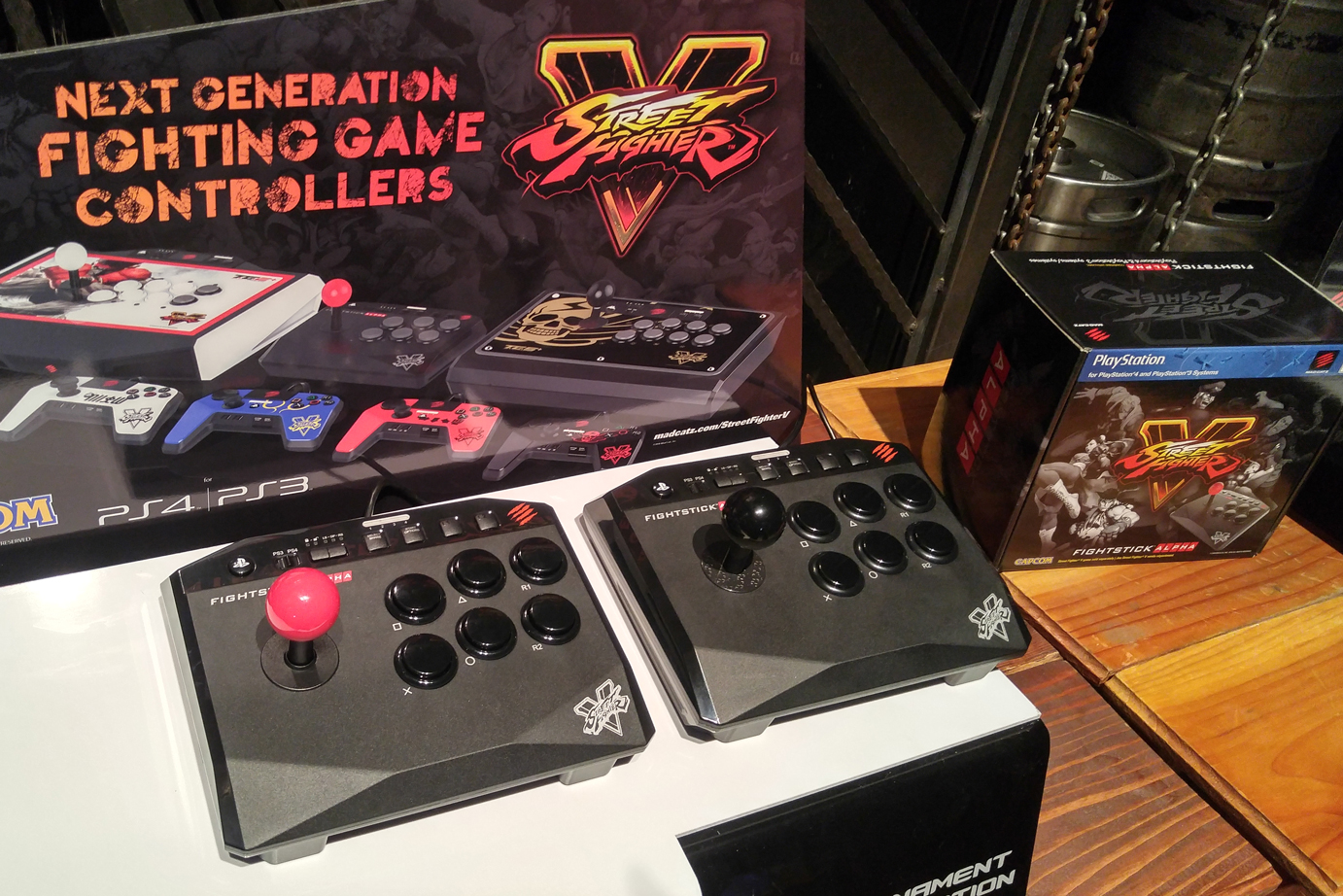 I had thought that the Street Fighter V Arcade FightStick Alpha was an afterthought; however, Mad Catz has revealed that this stick can be modded to a certain degree. The stick itself uses a six button layout, which just happens to be ideal for 'SFV' as well as most other serious fighting games. The buttons and stick used feel noticeably more resistant than the Sanwa parts. There seems to be a little more travel required on the buttons.

Mad Catz had one on hand that had been modified to use Sanwa buttons and stick. It's not a tall stick, and I was told that while the buttons are not directly attached to the PCB, the buttons are wired directly. That means more challenge than when using the quick connects. Still, this means that users can pick this fight stick, and decide later if they want to drop another $20-$50 to put in superior buttons and stick.

Update: Here's a pic of the inside of the modded Alpha (this picture comes courtesy of Mad Catz): 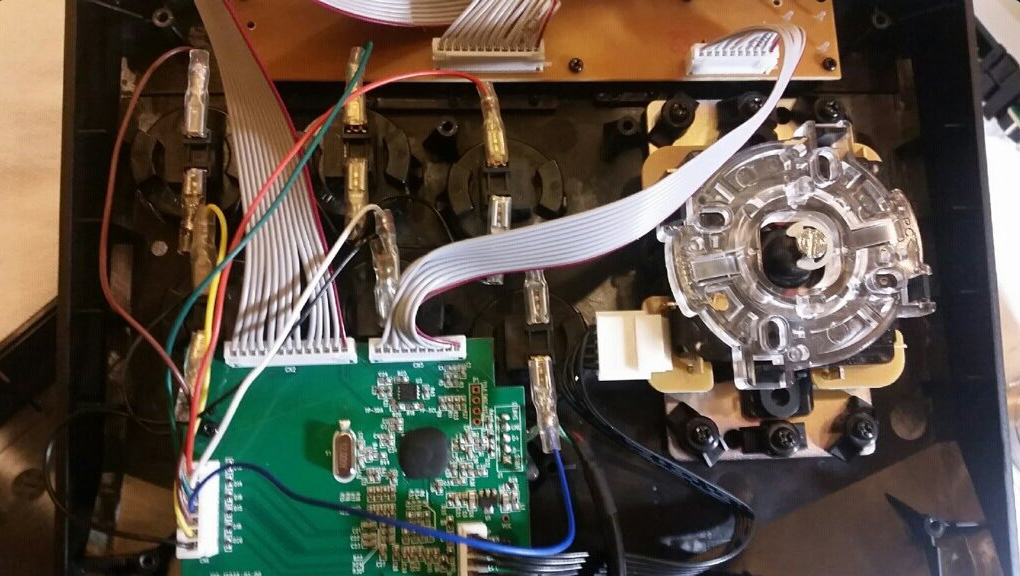 For stick players, the stock FightStick Alpha will be highly valued over a controller. Although it is one of the smallest sticks I have ever used, the room is put to good use, and neither hand felt cramped when I was using it.

Unlike the other products in the line, the FightStick Alpha has no touchpad and also no L3/R3 control. It does have the PS3/PS4 switch, the control lock, and the 3 way button for setting the stick. Its compact size and price ought to make it extremely popular. 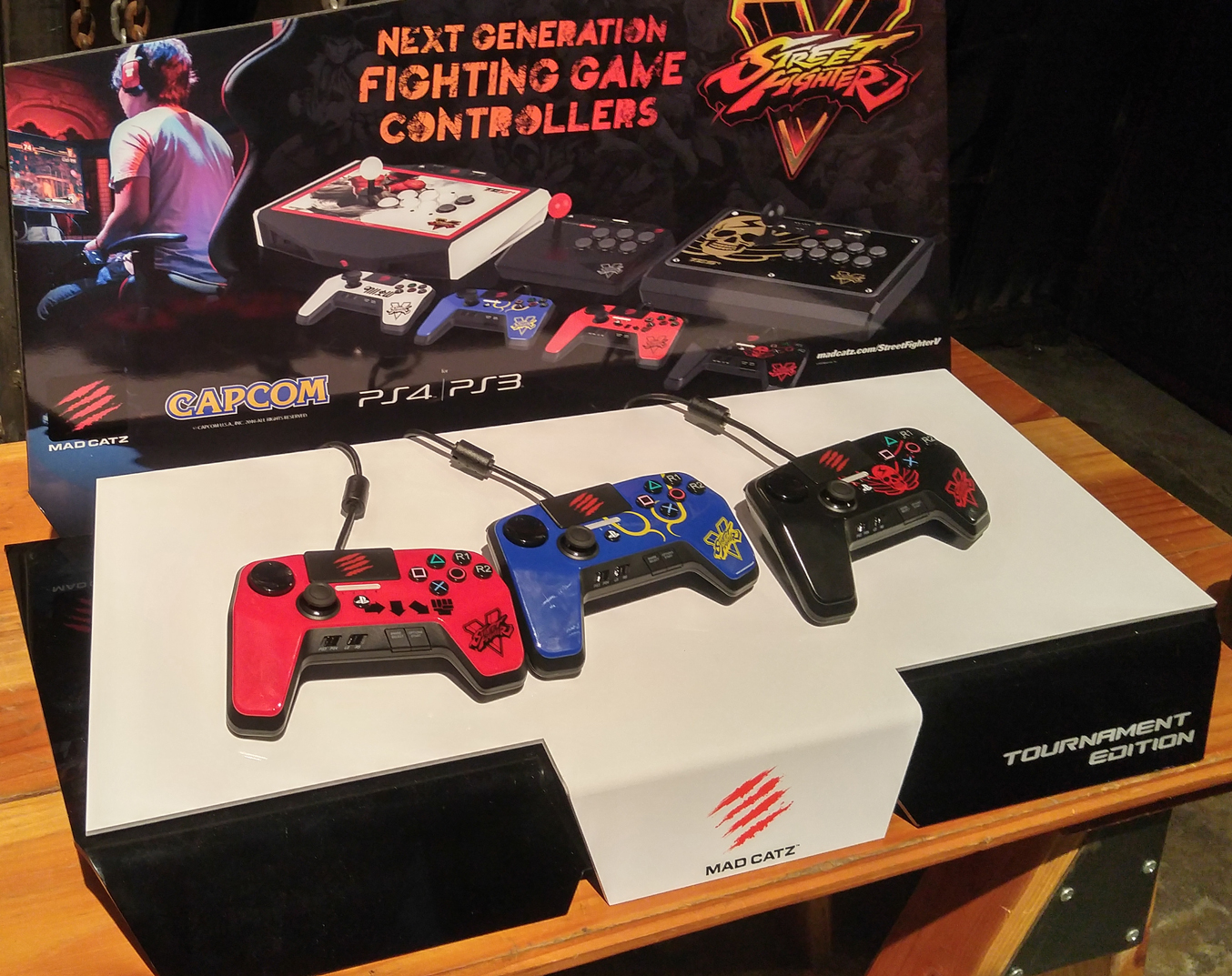 I said in the open that I had been playing 'Street Fighter Alpha 3' on the Vita prior to the event, and let me say, that is like to put using a controller for 'Street Fighter' into perspective. Even with the Vita's great d-pad, it's still far from ideal for a six button fighter. I could argue that the DualShock 4 is worse, but I won't. Instead, I'm going to focus on the FightPad Pro.

This is possibly the stealth hit peripheral of the year. No longer is Mad Catz content with just aping the old six button Genesis controller, and no longer is the packaging the highlight of the product. There's a smart curve used for layout of the six buttons. The controller has asymmetric grips which let the thumbs be free to work. On the left, there is a smooth (with indented arrows), concave d-pad, which sits offset with a fairly normal analog stick. The controller also has a full suite of compatibility features, and the fixed USB cable means no potential wireless issues. (In a tournament gathering, wired is for sure the way to go.) The Share & Options buttons are kept flush and safe, but still accessible. There is a PS3/PS4 switch and a left stick/right stick switch. A third switch on the back makes enables L3/R3 controls, and there is a touchpad. 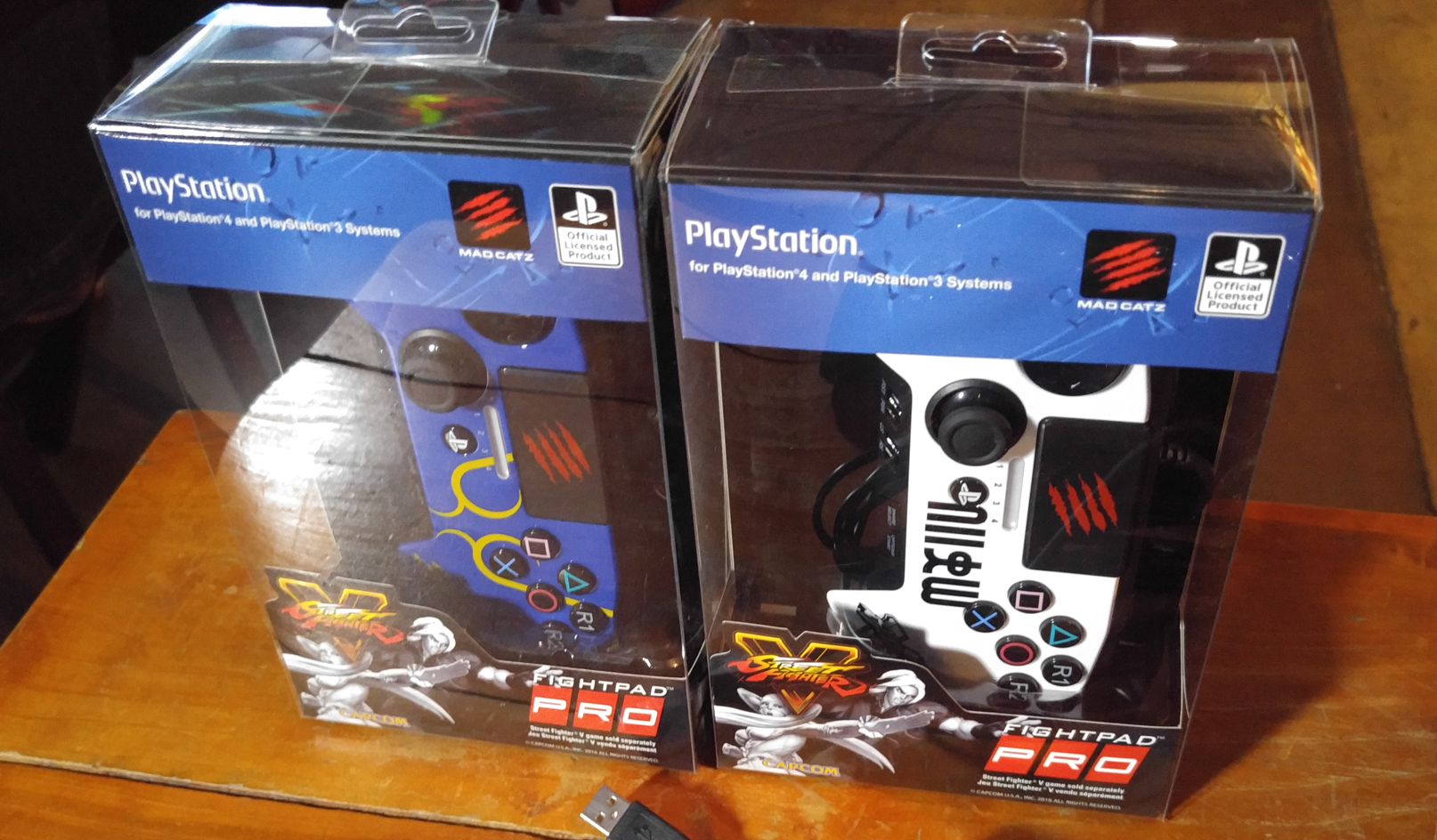 I'm quite faithful to fighting sticks, but the FightPad Pro does seem to have some serious merit. I suspect that a lot of new players (and some old ones) will flock to this controller. I slightly favor the red/Ken design, but all four colors are nice. I think the circular d-pad is the way to go, but others have said the analog stick is a viable choice. Fortunately, both options are in the same controller.

Mad Catz managed an impressive brand shift back with the original 'Street Fighter IV' peripherals, and the company has produced four very strong and somewhat varied options for 'Street Fighter V.' I hope that every player that dips their toes into the addictive world of 'SFV' takes the time to get hold of a decent FightStick or even FightPad when playing the new game. It's really that important.