Coveted CE off the table.

'Batman; Arkham Knight' is only days away from release, and its most obvious feature over its the series' prior installments is the addition of the drivable Batmobile to the openworld setting.

Having played the game, there is no doubt that the transforming Batmbolie is a difference makes, and one that isn't merely lifted from 'GTA.' (Just hold L2 to to see why.)

Unfortunately, the game's expensive, and long ago sold Batmobile themed CE, the 'Batman: Arkham Knight' Batmobile Edition has been cancelled by publisher Warner Bros. just days ahead of the promised released date. The cancellation comes with a refund and offer of free DLC (as well as more retailed specific offers). 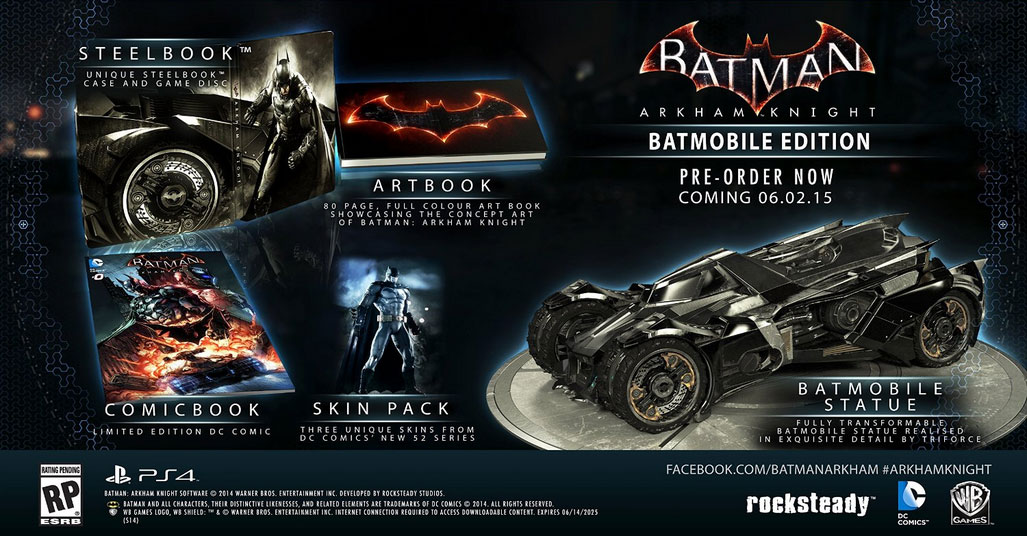 We regret to inform you that we are not able to release the Batmobile Collector's Edition of Batman: Arkham Knight due to unforeseen circumstances that greatly compromised the quality of this extremely limited run of product.

We are deeply apologetic for this unfortunate outcome. If you did pre-order the Batmobile Collector's Edition, please go to the retail location where you pre-ordered the product and you will receive a full refund of your deposit or it can be rolled over to another Batman: Arkham Knight edition or another product of your choice.

We will be providing everyone who purchases Batman: Arkham Knight with the New 52 skin pack, including Batman, Robin and Nightwing, free of charge.

The Batmobile Edition was to include a transforming Batmobile Statue, an 80 page color art book, a 'Arkham Knight' comic, three in-game skins from the New 52 Series, a Steelbook, and a disc copy of the game.

Unfortunately for those affected, not only is the Batmobile Edition cancelled, but the other statue bundled CE, the the 'Batman: Arkham Knight' Limited Edition has also long been solg out. The Limited Edition includes a Batman Statue, an 80 page color art book, a 'Arkham Knight' comic, three in-game skins from the New 52 Series, a Steelbook, and a disc copy of the game for $99.99.

Though, the Batmobile Edition has been cancelled, buyers can still find eBay listings that promise a locked in preorder.