'Middle Earth: Shadow of Mordor' Is Likely to Age Quickly, and That's a Good Thing

Warner Bros. and Monolith have scored big with 'Middle Earth: Shadow of Mordor,' combining elements of a popular sub-genre (third-person stealth action) with some fresh ground in a beloved license. (Check out the review here.) For those that haven't yet spent much time with 'Shadow of Mordor' or its genre mates, the game plays much like a direct descendant of 'Assassin's Creed' and the 'Batman: Arkham' series. There's free-running with 'X' button (PS4), and stealth moving with 'R2.' But as with other aspects of the game, 'Shadow of the Mordor' goes a fun and easy step forward, and 'X' plus 'R2' allows for stealth running, virtually free of any kind of restriction.

The combat system may be inspired the WB's own 'Batman: Arkham,' but with all of the killing, it plays more like 'Assassin's Creed.' Unlike an Assassin who can be overwhelmed by the never-ending enemies of 'Black Flag' or the caped crusader, who is always moments away from collapsing under an onslaught of bullets, 'Shadow of Mordor's Talion is powered by the wraith like Celebrimbor, and can stand toe to toe with dozens of enemies. Talion can jump from the highest towers into the darkest fires and not break a sweat. When he does get in trouble, he can usually run and climb his way out of trouble, provided there hasn't been an arbitrary "out of bounds" placed on the map during a mission. 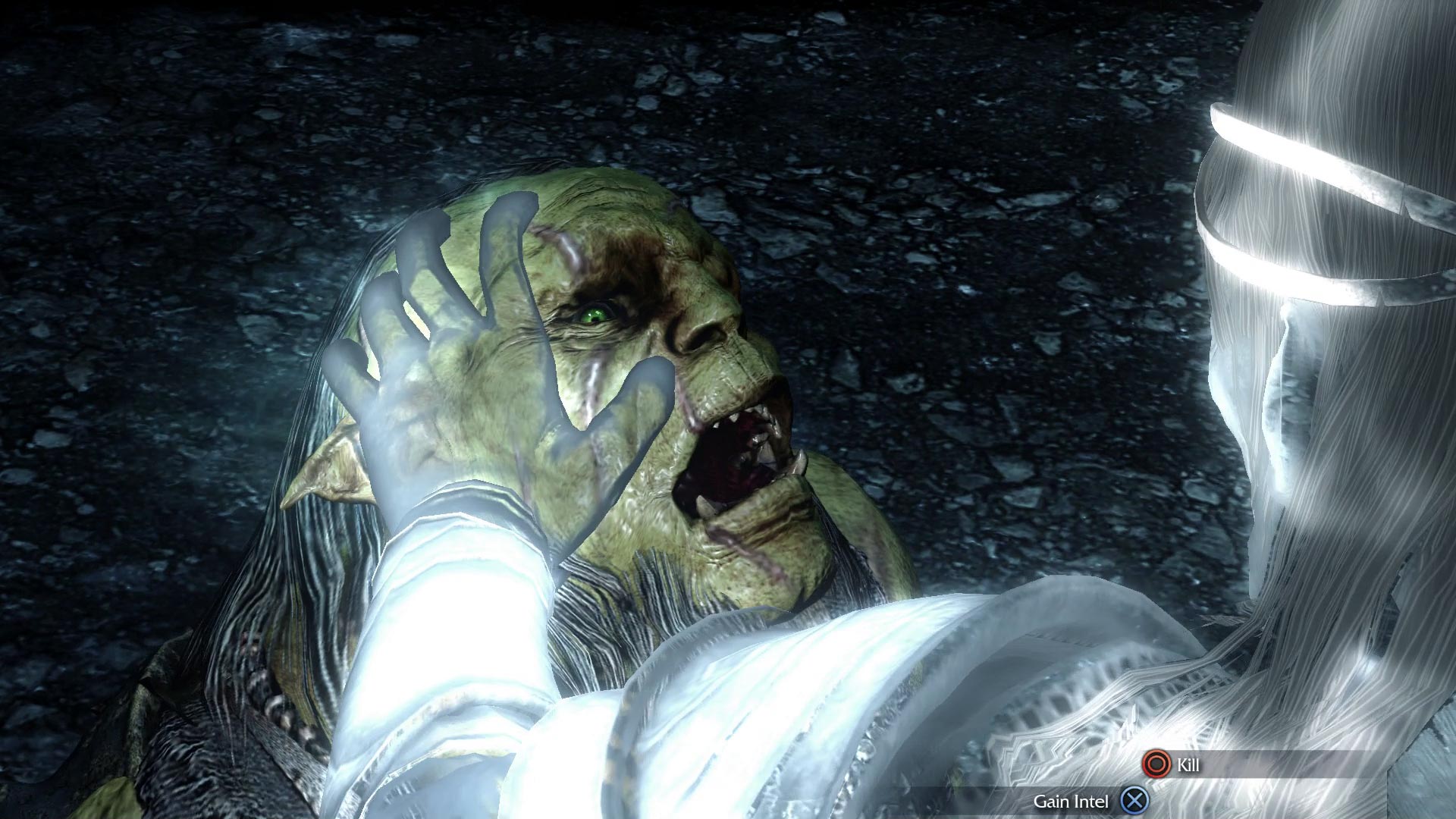 So players stepping into 'Shadow of Mordor' should find it both familiar to play and less like to cause player death, which is good since dying has its penalties. 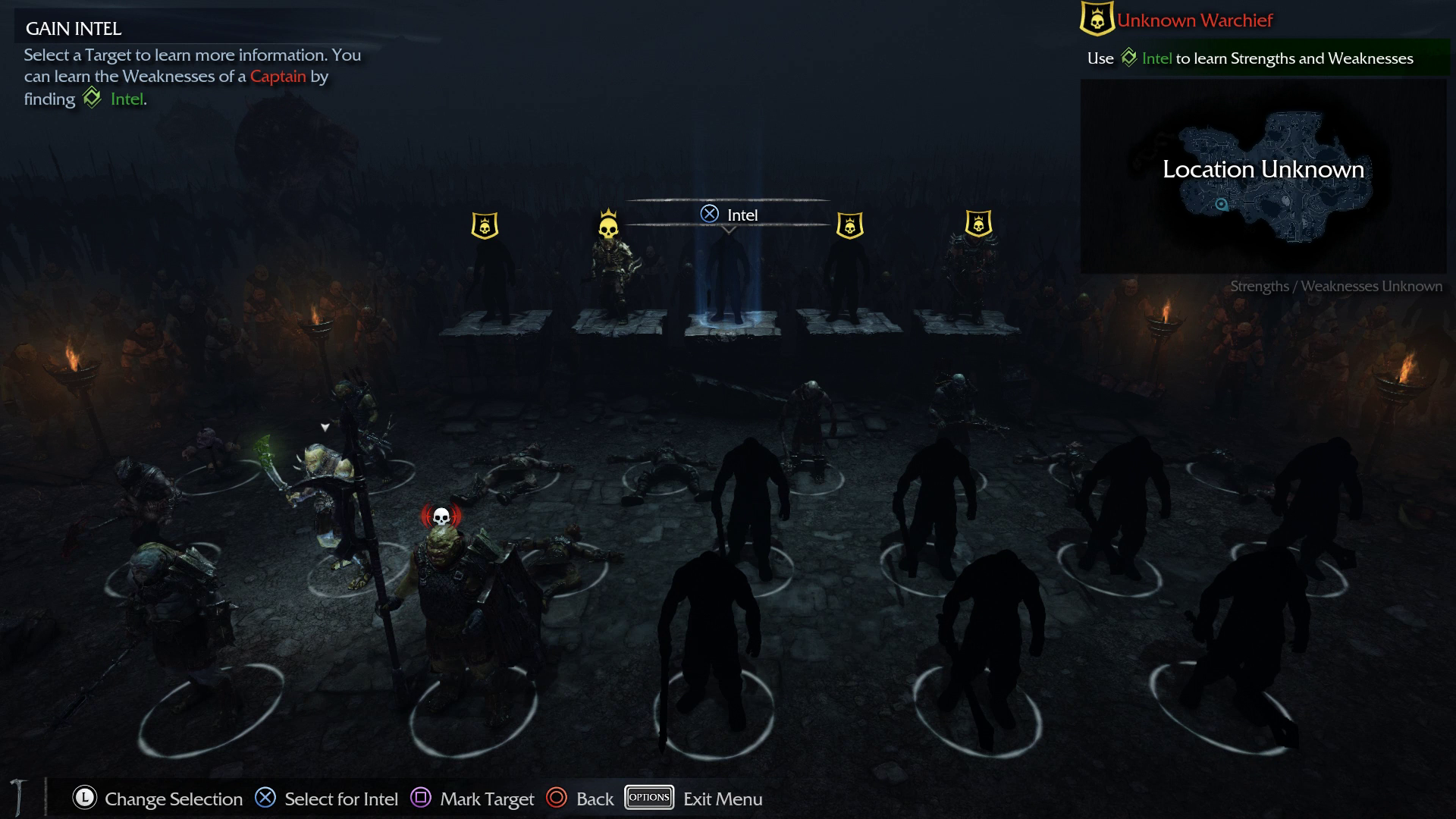 While this may make the game sound uninteresting, it's far from it. A big difference is the game's Nemesis system. With 'Middle Earth: Shadow of Mordor's Nemesis system, certain enemies, like captains, have levels, special attributes and names. They remember you and talk trash. They even remember if they've killed you before. I spent my first hours with the game roaming the land and taking on the many captains, this even before learning about any of the game's systems.

The amount of freedom in how to take on captains makes the process a blast, and that's before learning how to exploit their particular weaknesses and minimizing their strengths. Just roaming around, picking up XP, Power points and runes will make Talion more and more formidable. After the first death, I made it priority not to die again. I had been killed by one high level caption, and my death made this range fighter level up and become stronger. Another captain seemed likely to cause my second death, but his 'humiliator' status meant he refused to kill me.

Here's an example from my playthrough. As an aside, this was captured off my PS4 using a Elgato Game Capture HD60, and the capture looks so much better on my PC than it does on YouTube:

When I figured out I couldn't just kill all the captains, as their vacated positions are refilled pretty quickly and the Power points rewards are worth only a fraction of killing them within the 'Struggle of Power' missions, I turned back toward to the main game, anxious to unlock some of the upgrades that had been specially blocked. Still, the captains, war chiefs, etc. make their presence known, often times in missions that seem very simple. Freeing a few slaves can seem like child's play until it turns out that not one but multiple captains are on the scene, ready to taunt about past encounters. 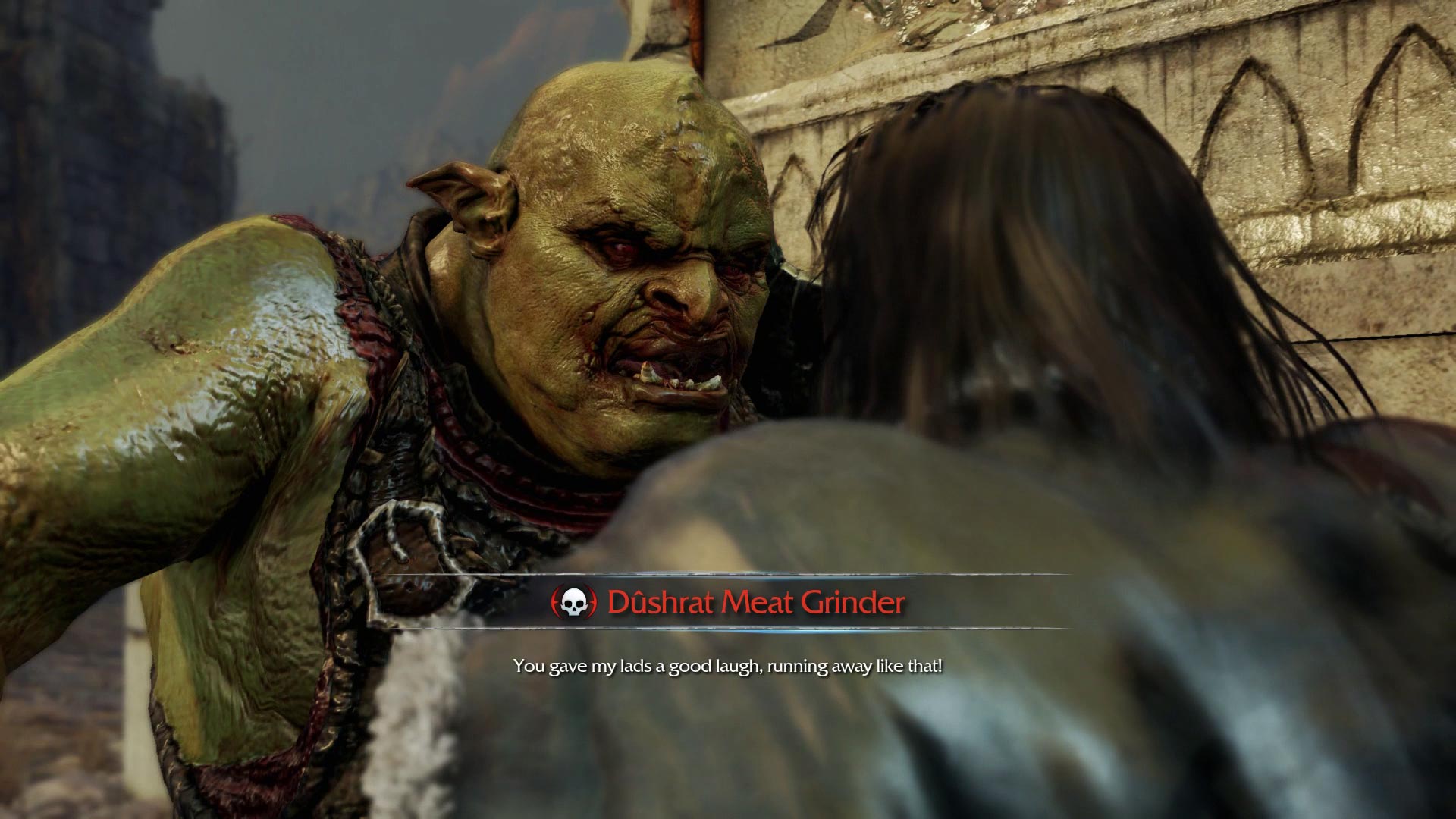 Another feature that's intriguing but seems under realized is the ability to get revenge for friends online. Even though the missions aren't special from a design standpoints, it's nevertheless pretty tempting and at least somewhat satisfying to take out a captain who had apparently just killed someone on my friends' list.

And yet, I always find myself taking the time here there to go fight with these special enemies, because it is just that much fun. In essence, the enemy NPCs are gifted characteristics that make them a bit more valuable to face than the rewards given by killing them. It reminds of bots in 'Unreal Tournament' or a more modern way of flavoring faceless enemies, the Drivatar system of the Forza series. After playing against Drivatars in 'Forza 5' and 'Forza Horizon 2,' it's a feature I want in every racing game. It's also a feature whose backend is owned and operated by Microsoft (tied perfectly to Gamertags), and thus I don't expect to see something similar as well executed (player influence, signature AI) in another racing game very soon. 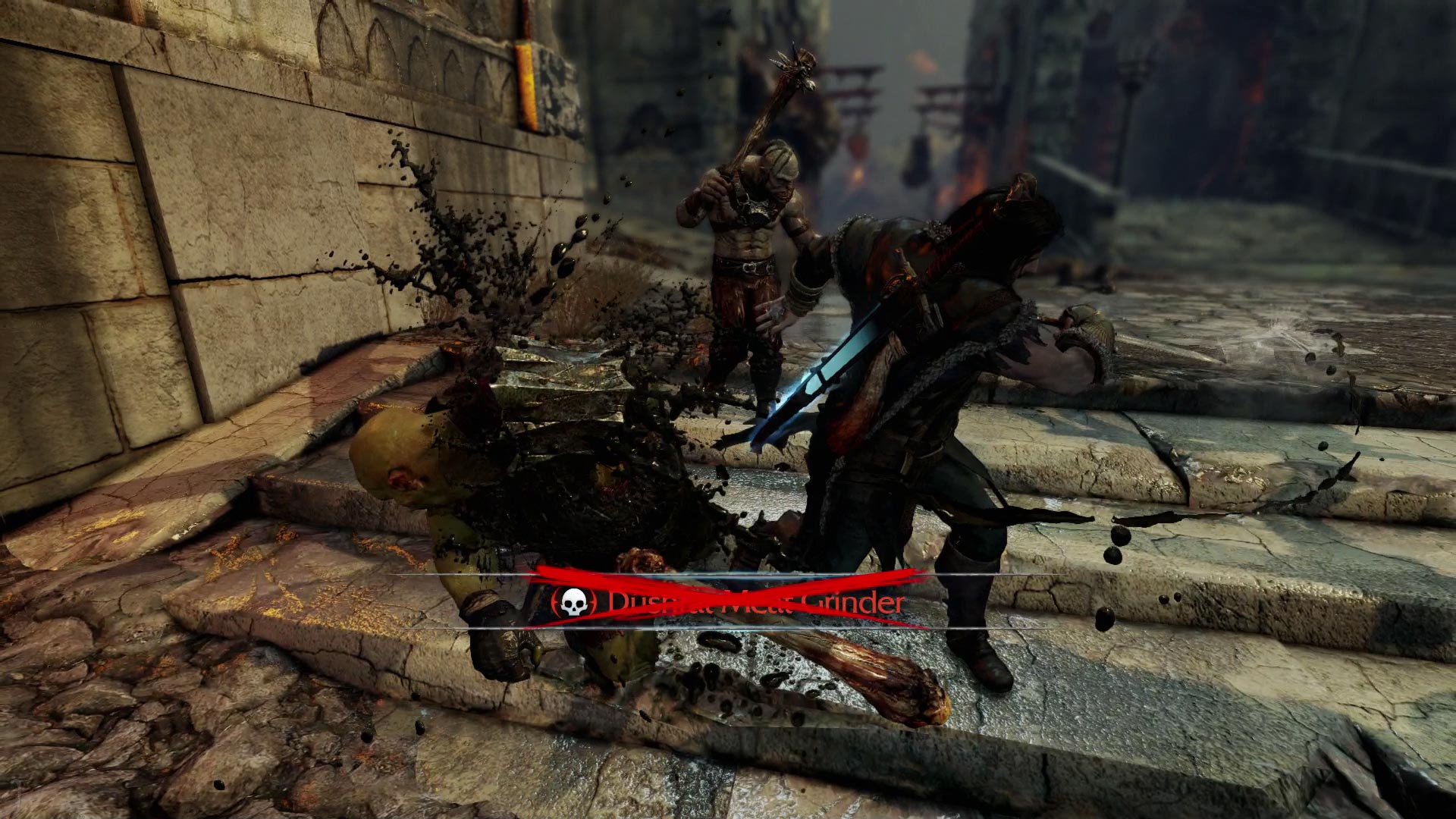 So if the Nemesis system is such as joy to play, providing a satisfaction in gameplay that's more important that in-game rewards, then why I do feel that 'Middle Earth: Shadow of Mordor' won't age well? The answer isn't to do with the rest of the game. The whole package works well, and is a recommended buy right now. Though its world is bit muddy to look at in many places, the game is right at home in my home theater The problem is that other developers would be very unwise not to be working on their own takes of the Nemesis system.

I'm not just talking about the kind of joy that a similar system could deliver in 'Assassin's Creed' or 'Batman: Arkham.' It would be excellent if the Templars of the first Creed title returned with some player influenced and growable statistics. If some of the street level thugs in 'Batman: Arkaham' got names, particular strengths and weaknesses to analyze, and could talk smack specific to previous encounters, it would go a long towards making the streets of Gotham feel alive.

Even game likes 'Far Cry' and 'GTA' could do with some personality in their enemies, especially as the player tends to brush with so many over and over again. Being called out by such enemies is a little like calling Marty McFly "chicken," and it's always tempting to turn around and answer such barbs. 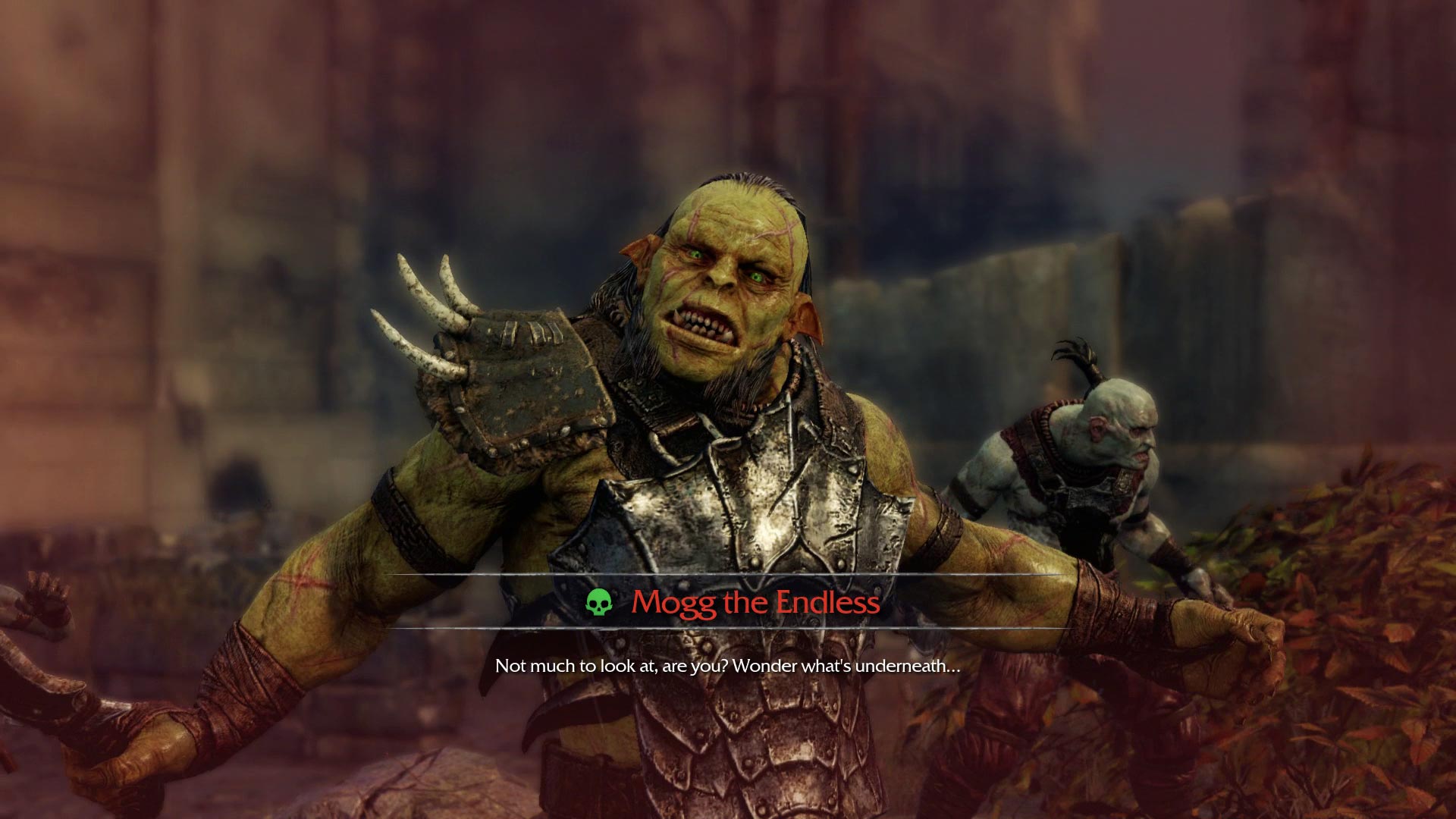 But what about a game like 'Dark Souls?' If a certain class enemies in 'Dark Souls' could remember past resetting the world, could learn what the player likes to do, could call on lower level enemies for assistance, and could yield a possible reward tied to player interactions, those enemies could provide a whole new depth to an already deep series.

And that is why 'Middle Earth: Shadow of Mordor' is like to age quickly, and that isn't a detracting factor at all. Having realized such a great, multifaceted feature, the game's best aspects ought to be co-opted several times over. If a 'Shadow of Mordor' sequel was released in 2016, there might already be a half dozen games sporting their own takes on the Nemesis system. It's a great idea, and it's well executed, but it's also an area ripe for iteration. Play the game now to experience it while it's fresh, while the early peak of an idea hasn't yet become bloated and formulaic. And play it now to teach those servants of Sauron who's boss.