The Search for Level 30: Impressions From 'Destiny Expansion I: The Dark Below' On the PS4

Be warned, there will be plenty of spoilers, and so forth.

Even for veteran players who enjoy playing 'Destiny' regularly, today is an important test. With the release of 'Destiny Expansion I: The Dark Below,' the first substantial (and paid) addition to 'Destiny' since the game's September 9th launch is available for all to see. 'The Dark Below is Bungie and Activision's opportunity to prove that the vocal and ongoing criticism and feedback of 'Destiny' has not gone unheard and unaddressed.

For me, it's also the day that my Warlock might finally hit level 30. But I'm getting ahead of myself. 'The Dark Below' began as I and my regular fireteam teammate awaited the 1AM PT drop time. We'd been playing 'Destiny' the evening prior, but had exhausted anything remotely considered an activity in the game. I even had ten completed bounties ready to turn in once I got hold of an item worth leveling up (which isn't any of the Exotics right now). With an hour to kill before the launch, I fired up a Share Play session of 'Far Cry 4,' and toyed around trying to say hostages from elephants and elephants from the army.

Finally, the 'The Dark Below' witching hour hit, and in rather auspicious fashion, a few 1MB downloads had me ready to go in snap. (I suppose all those recent updates were entirely pregnant with 'The Dark Below.')

Here's how 'The Dark Below' began: 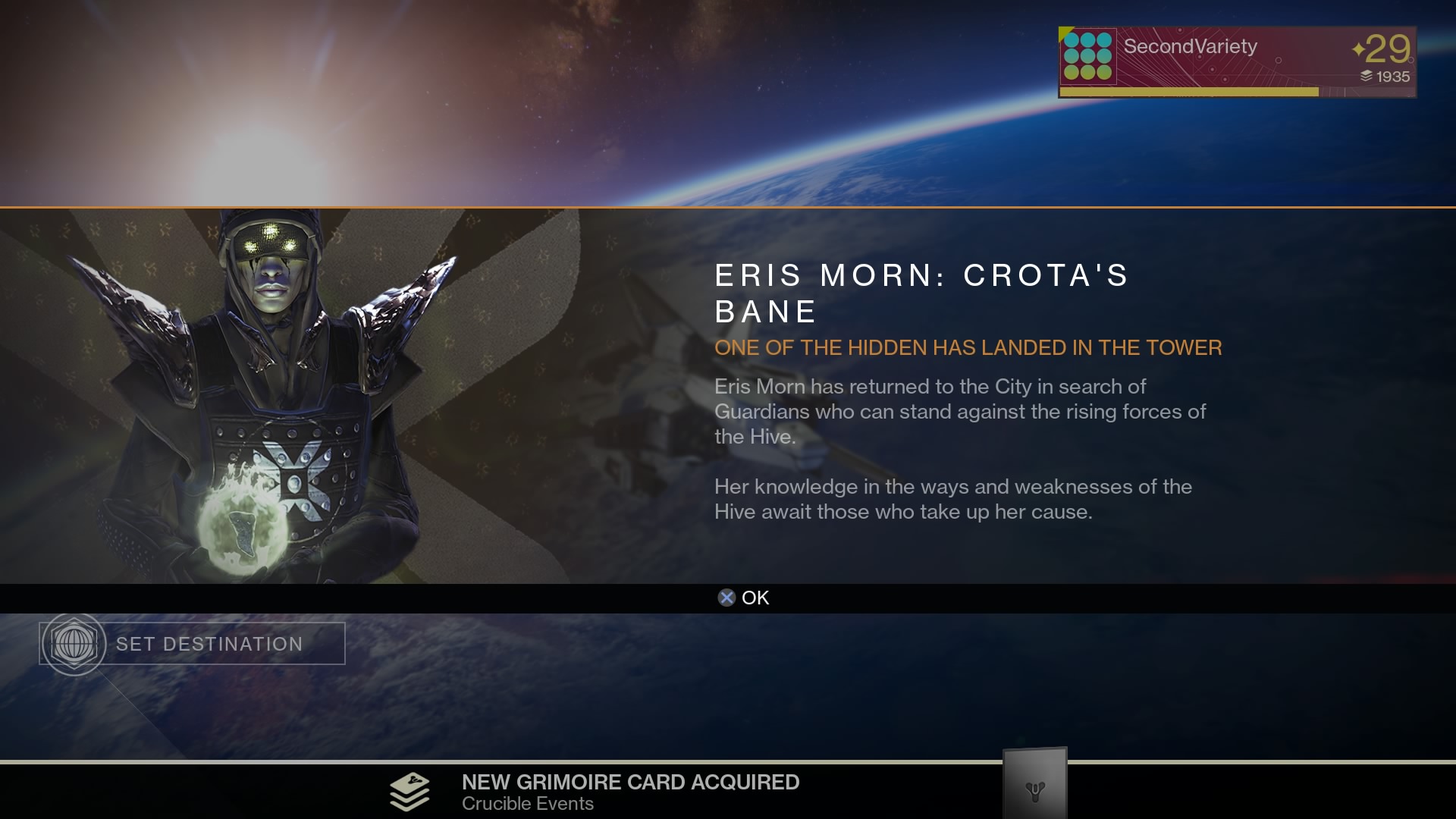 While this 'The Dark Below' might have had ascendant materials, it turned out to have some blues, which went into the trash. 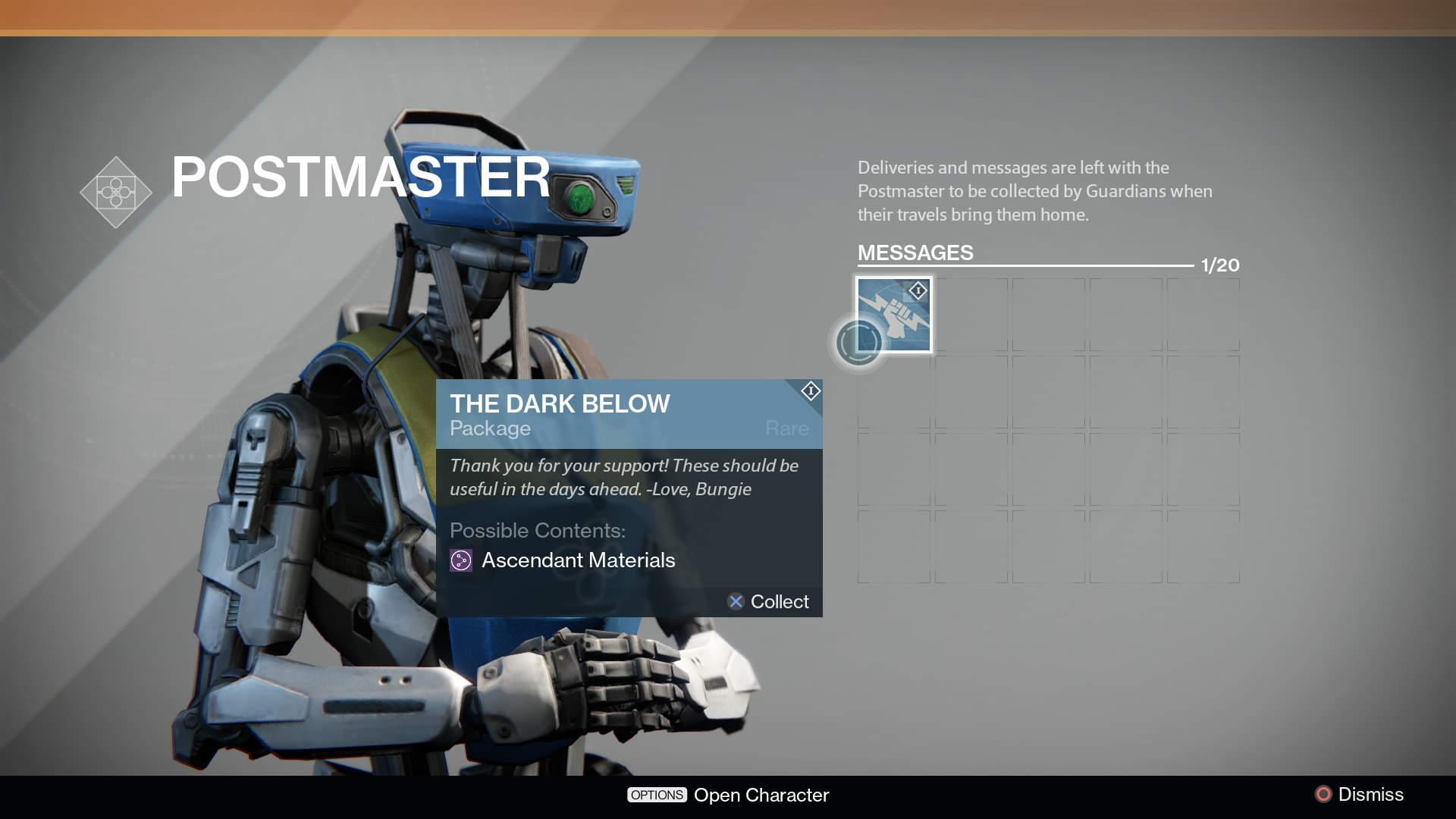 For some reason Eris was a little late showing up in my Tower, and my teammate and I couldn't immediately join up. After a minute or so, the issue, likely a temporary server hiccup from strain, resolved itself, and we were ready to see Eris.

A quick look around, and by using Vanguard Marks, I was able to pick up both new boots and new gloves, which are both potentially higher in light level than anything I have had. My Level 29 gear is a hodgepodge Queen's Wrath, Iron Banner, and Exotic items. I've wanted a new helmet or chest piece for ages, but the closest I came to armor in the Vault of Glass Raid was a pretty arm band. (I do have a nice assault rifle that does, void damage, but the rest is Chatterwhite.) To get a helmet, I'll need a Vanguard or Crucible Commendation (even for my Future War Cult faction), and the previous 13 reputation levels gained with those parties is worth exactly zilcho at the moment.

So instead of ascending to level 30, I dropped back to level 28. Now onto the story missions.

In true 'Destiny' fashion, there is little pomp to Eris. "Something, something, six of us. I survived and here's a mission/bounty." And with that, the first of the three story missions had begun.

Much to my surprise, the first (and second) mission didn't take us to the all-too familiar area of the moon, but instead, we went to the even more familiar grounds of Old Russia. 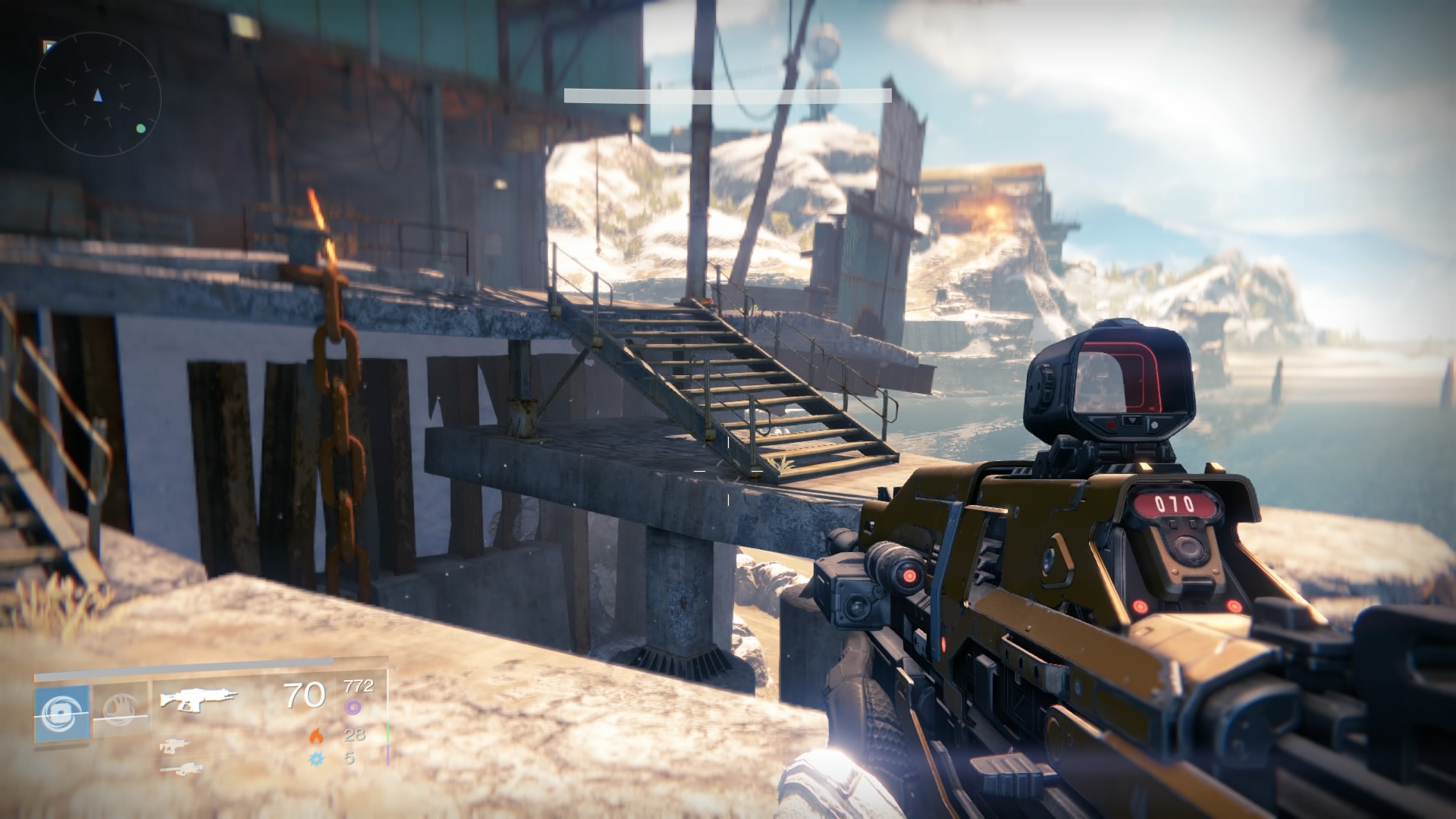 For whatever reason, the new content is quite content with adding very little in terms of new environment art. New enemies are likewise a bit of a no show. Instead, there is a higher degree of challenge, keyed by a willingness to throw a lot of simultaneous enemies at players. Enemy types, however, are restrained, and it's only ever going to be Hive or Fallen. Presumably, the next expansion will feature Vex and Cabal. 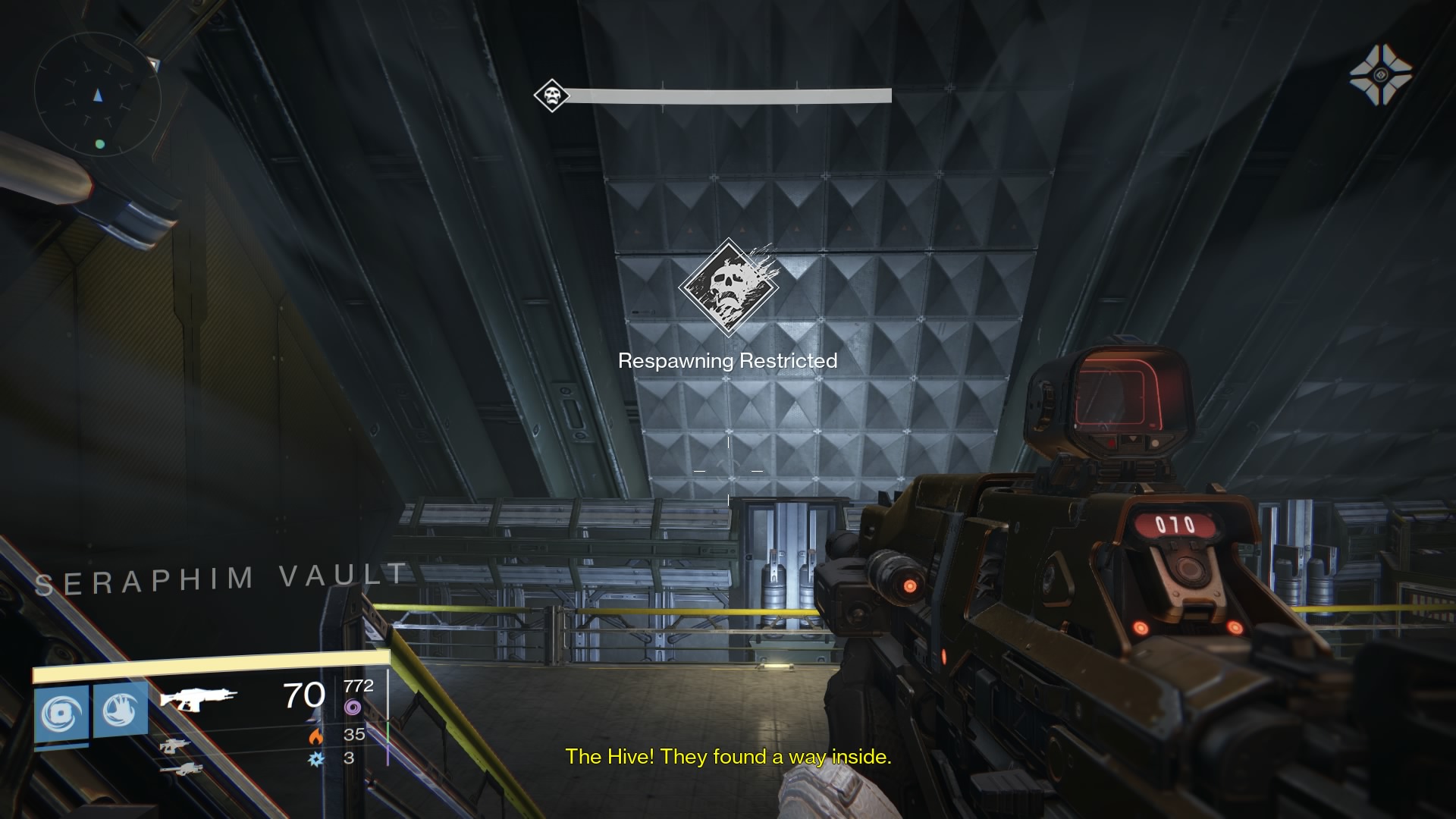 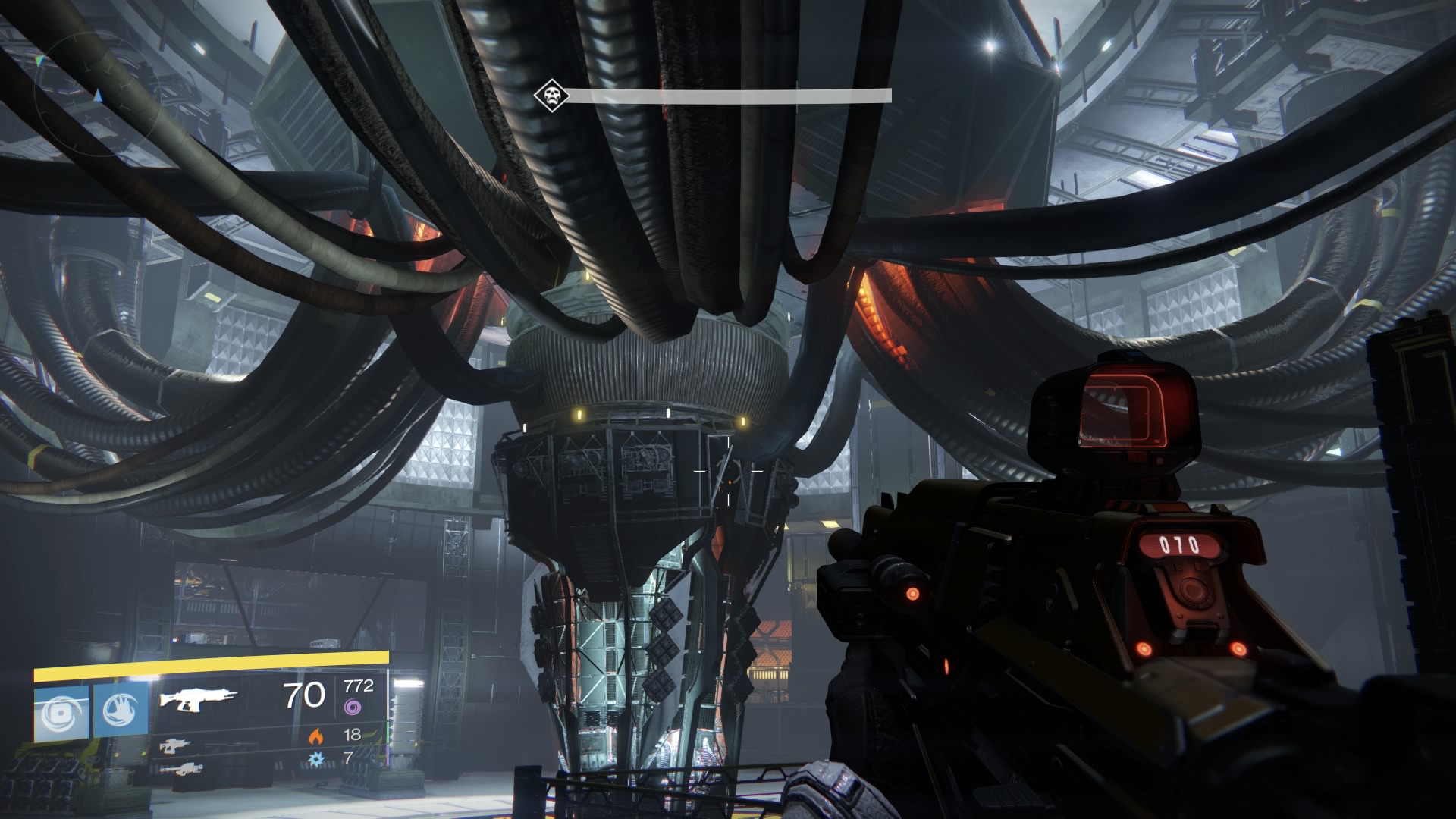 Choosing the harder version, the first mission's level 28 was a little overwhelming at first, but we adjusted to the tempo pretty quick. Unfortunately, in the second new story mission, I didn't realize the hard difficulty jumped to level 30. At the end, a Witch watched as we were trapped in an awkward octagon with wave after wave of witches and knights. First Wave, one elite witch. Second wave, two elite witches. Third wave, three elite witches. Fourth wave, a phogoth style enemy plus endless knights. Though we had switched back to our level 29 gear, I resurrected for the last time in the fourth wave and we faded into the darkness. We decided then to knock it back one peg, which in 'Destiny' apparently now means from level 30 to level 26. This time around, we breezed through, and there was not even a fourth wave, a sure sign of a huge difficulty gap.

Finally, we ventured to the moon and ascended down a very well-worn path. Some wizards and knights were conducting a ritual to bring back Crota, and we spoiled the party. Crota never came to life, though I imagine he does in the new raid. 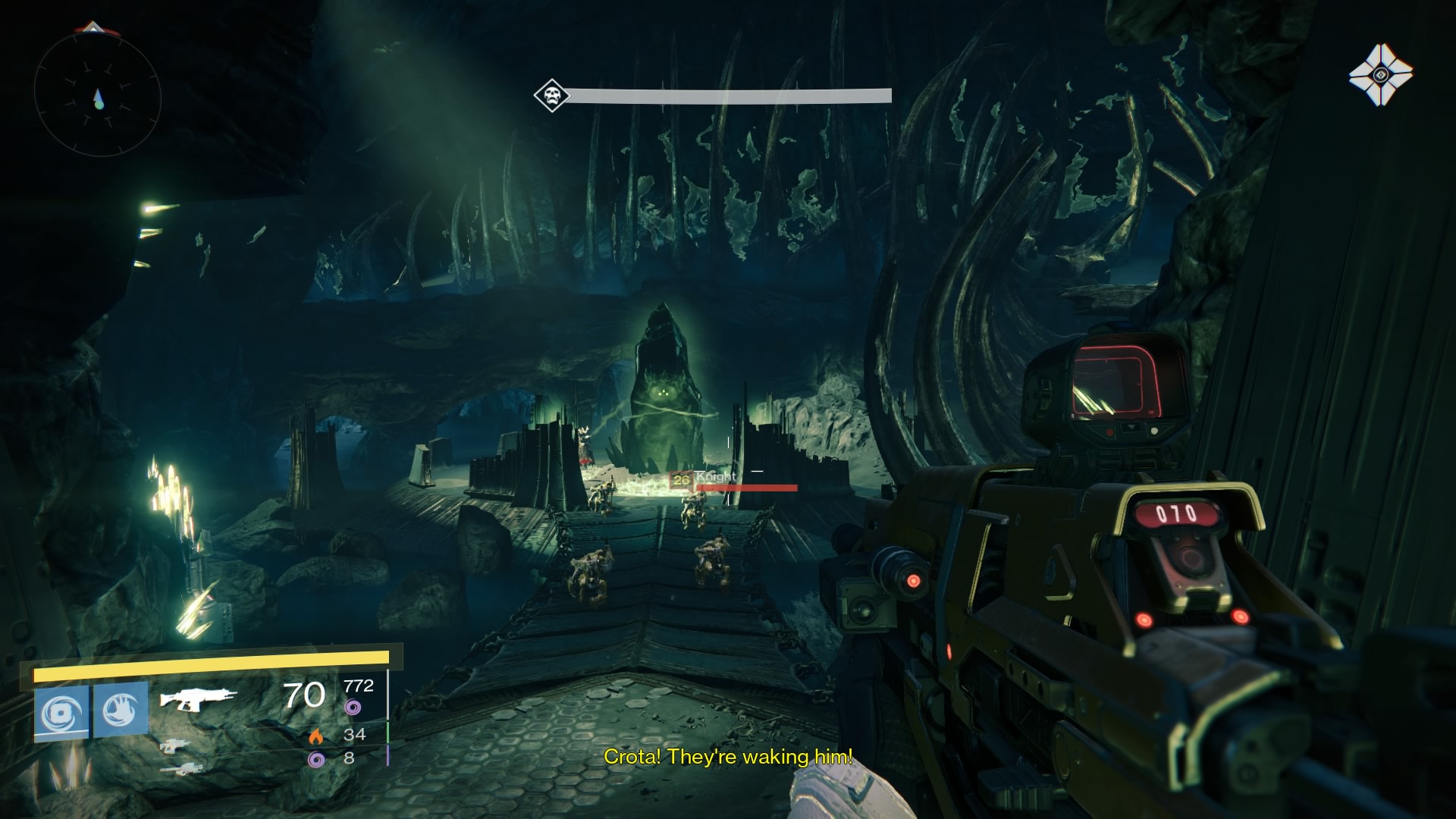 The Murmur and the Bounties

Having completed, the, um, story, Eris rewarded us with the Murmur Fusion rifle, that as of yet looks much cooler than it handles. 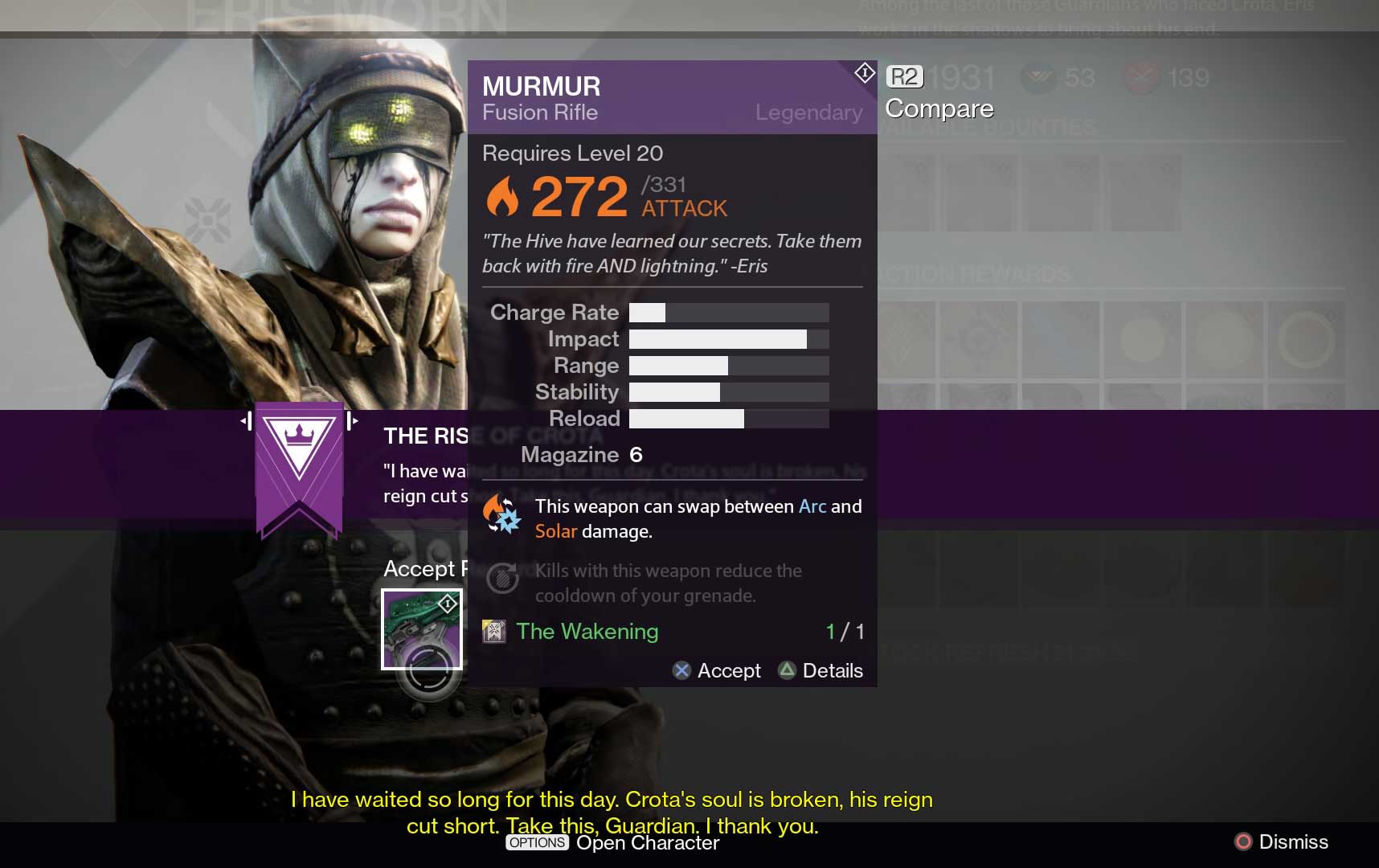 From there, we were able to move forward with Eris' bounties. Again, this meant trudging down to Earth. A trio of worshipping Crota hive types must be found and dispatched (in patrol mode - pro tip: look in areas that used to be empty). These Eris' bounties are meant to be intriguing when comapred with normal bounties, and so far, they are that. 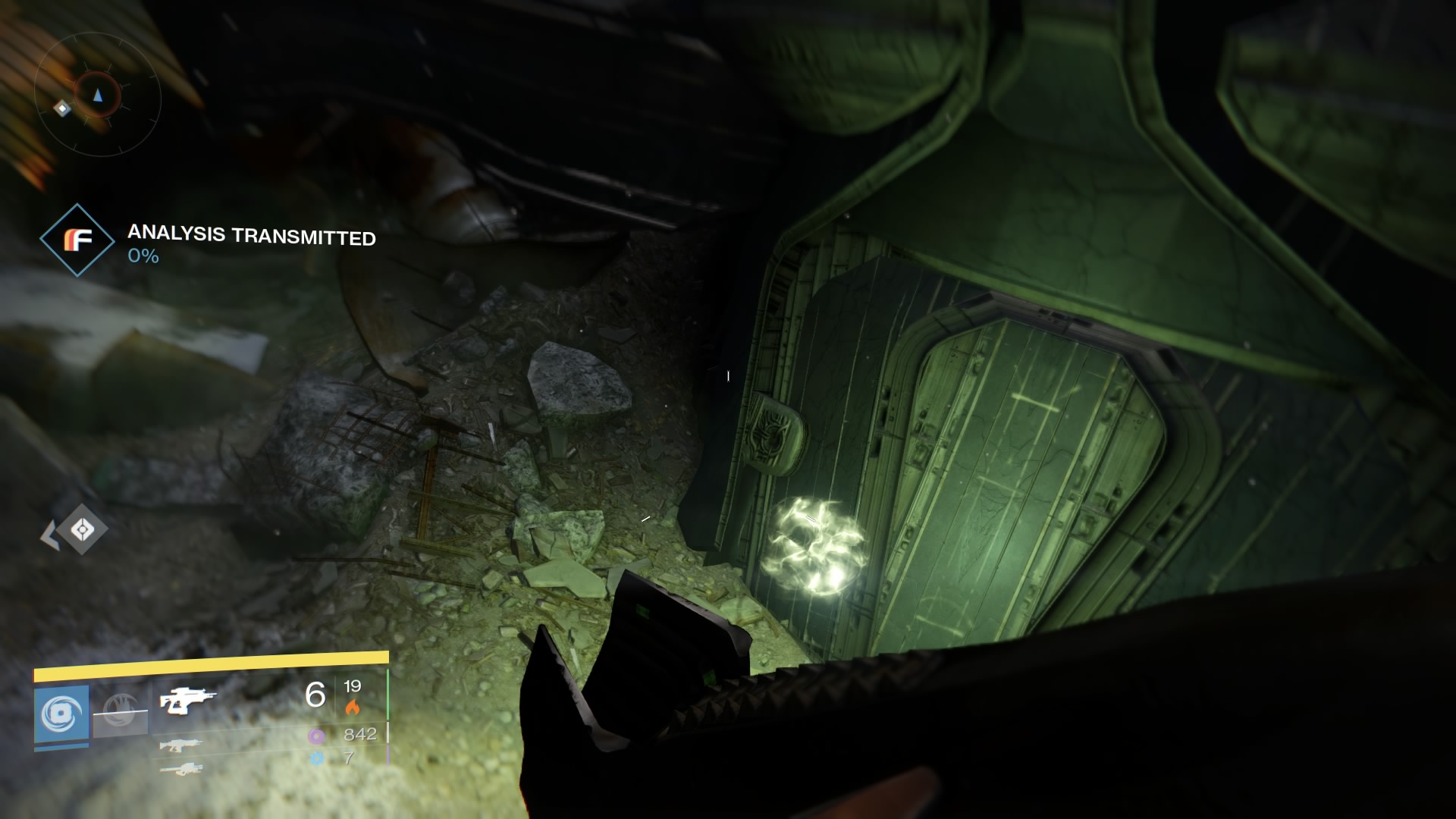 The Will of Crota Strike

After which, the Will of Crota, (the new non-exclusive Strike) opened up. Of course, this again meant a trip to Old Russia. I suspect this Strike will change somewhat due to its enemy flooding nature, but as of now, it is fun to bang away at the endless lesser enemies, as "Omnigul" the general/witch hybrid screams for more reinforcements. 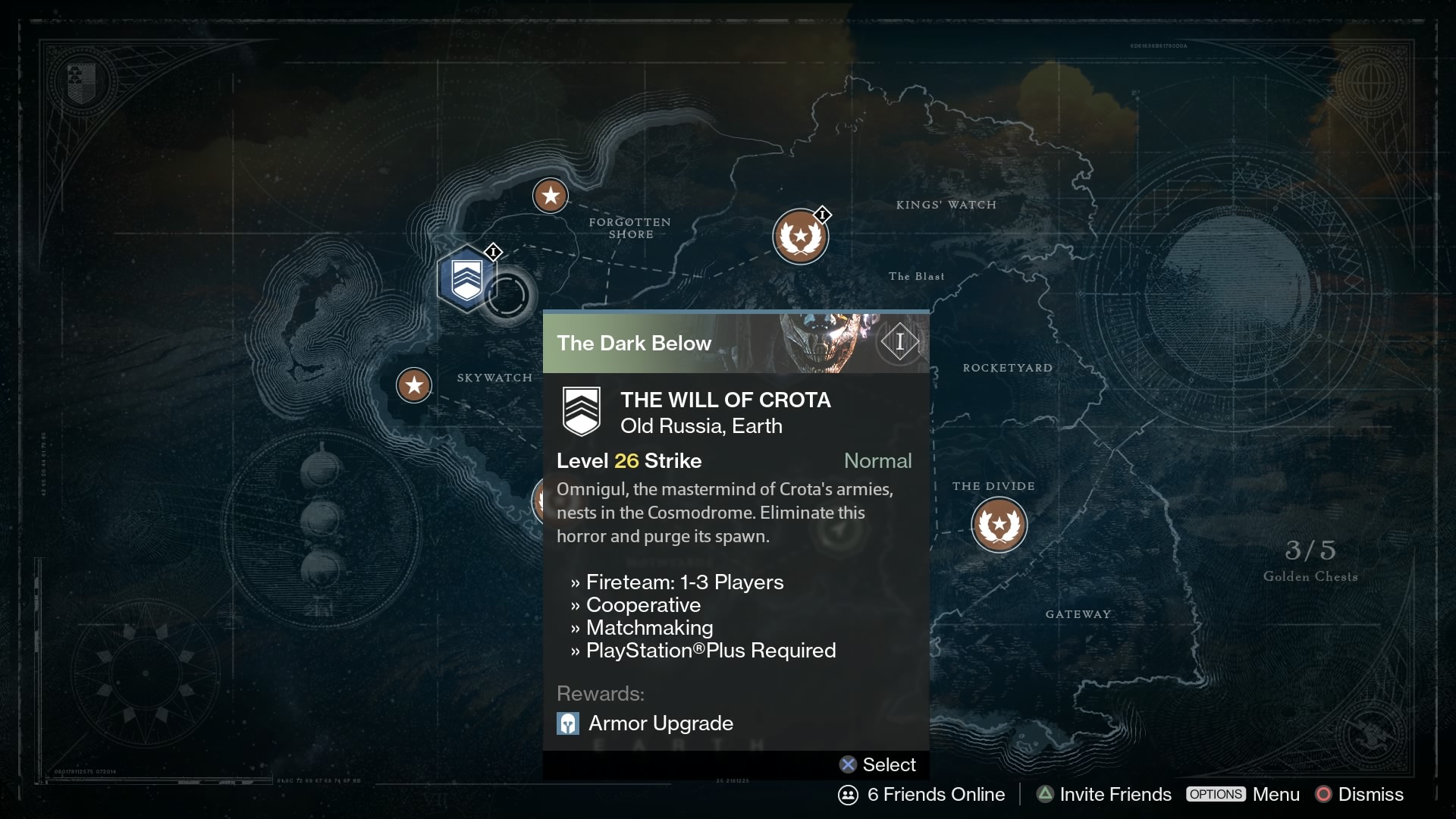 Beyond that I was crestfallen to find that yet again, my new equipment requires helium filaments. Somehow, every piece or armor, and nearly every weapon I pick up or buy requires the same resource.

So I was left to farm for helium filaments. I bought some with Vanguard Marks, but I still have hopes of getting a new helmet this week, and elected to save the rest of my marks. I'll get the new helmet provided that I can rank up my Vanguard reputation through bounties, patrols, and strikes, and nab a Commendation.

Still, by setting my new gloves aside and focusing on leveling the new boots (remember those ten completed bounties), I finally hit level 30. That means I can play the new Nightfall and the new Raid. I also still need to play the PlayStation exclusive 'Undying Mind' strike, and tackle the three new multiplayer maps. I'm even expecting to try the second and third story mission on their harder difficulty level. Ultimately, I suspect that just maxing out my new Fusion rifle will be problematic as it requires a new Radiant Energy for its final column, and I'm sure getting to level 32 will have its own Sisyphus-like struggle (the new Iron Banner stops at level 31 gear for example). 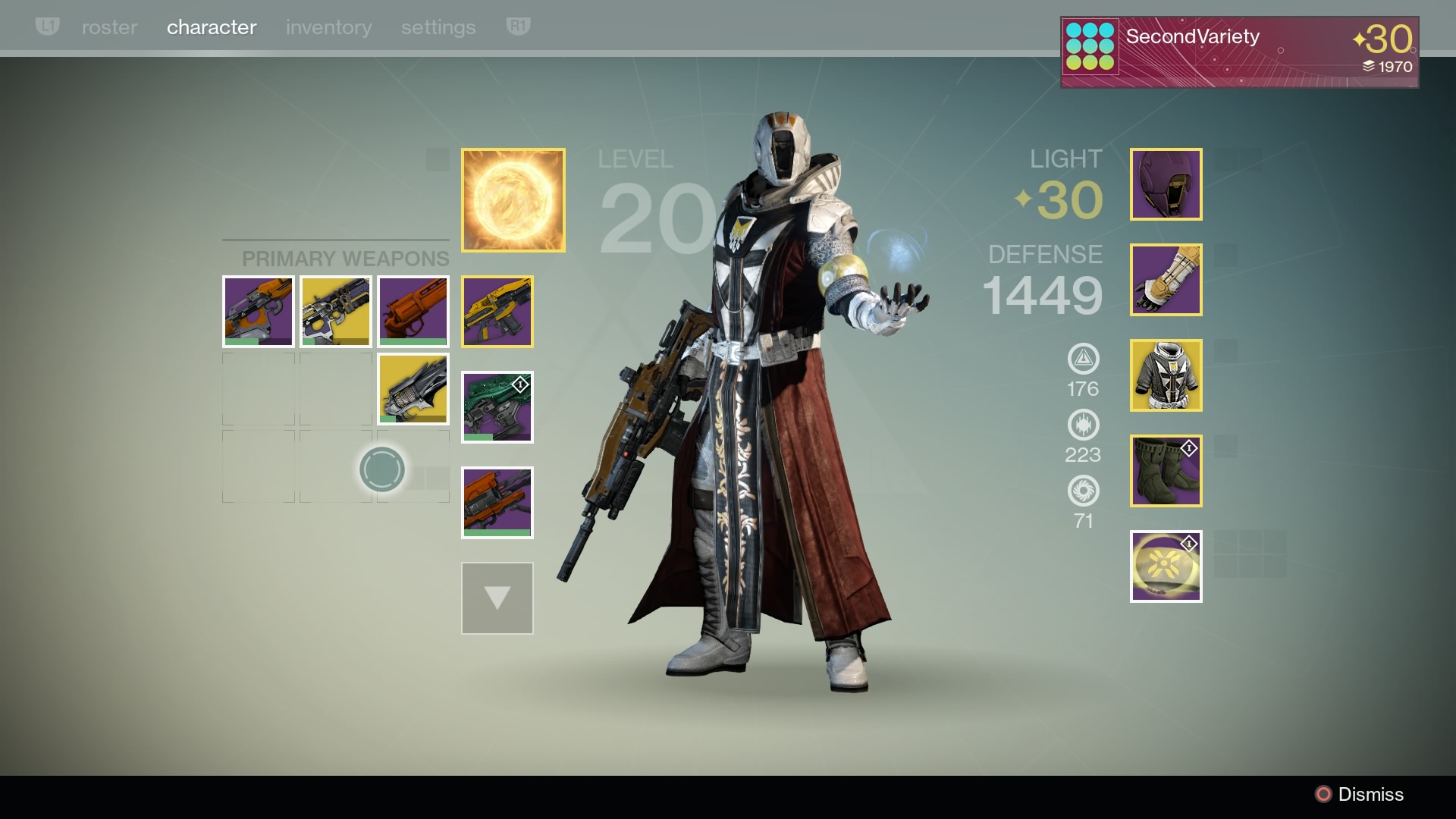 After the First Night of The Dark Below

Right now, 'The Dark Below' seems like more of the same 'Destiny,' albeit at its freshest since the Vault of Glass opened. There are still plenty of green and blue trash pickups floating about. The story is improved just simply by removing Peter Dinklage's Ghost from the equation. Eris sticks with being serious, and is reserved in manner compared with the continual mix of alarm and tiresome quips favored by the Ghost. Even better, it seems that whomever designed this content, realized that by allowing players to face greater numbers of enemies of varying degrees of difficulty at a time, those players might be having too much fun to notice the comparative drop in polish for even sparser levels. Naturally, those that have enjoyed the game thus far can now enjoy the injection of new content, even as we mill around trying to pry new gear from the game. Hopefully, in 2015, when the next expansion roles around, the community will be as anxious as it has been for 'The Dark Below.'