In a surprise Nintendo Direct, Nintendo revealed several details about the upcoming 'Mario Kart 8' including both a free game offer and a system bundle. Those who purchase 'Mario Kart 8' (in digital, stand alone or bundle form) and register the game with Club Nintendo before July 31 will get to choose one free eShop title from the following list: 'New Super Mario Bros. U,' 'Pikmin 3,' 'The Legend of Zelda: The Wind Waker HD,' and 'Wii Party U.' 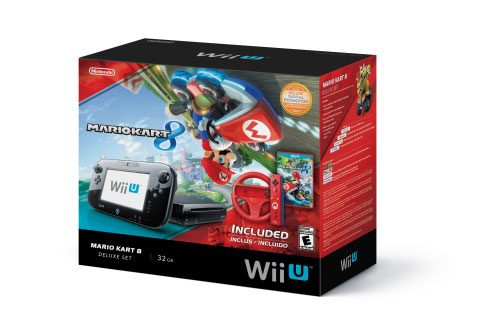 Other features specific to the game revealed today include:

Online Multiplayer: Up to 12 players can race together online in four different multiplayer modes, as long as everyone has a broadband Internet connection. Like to trash-talk your friends while you’re preparing for a race? You’re in luck! Mario Kart 8 lets players chat with one another in the lobby area using the Wii U GamePad microphone or text phrases as they wait for their friends to join. Players also can create public or private tournaments for which they specify the day of the week, the time and the rules. Per tradition, players will be able to race against ghost data from friends or even the top 10 worldwide racers. They can try to beat them or just pick up a few tips and tricks from studying the best. If you beat the development team’s ghosts, you’ll get cool stamps for use in Miiverse posts.

Mario Kart TV: As previously announced, players can watch their highlight racing reels, rewind them, play them in slow motion or upload them to Miiverse. They can watch the world’s most popular highlight reels and comment on them. But players with Google accounts can also upload their reels directly to their YouTube channels.

New Items: Items are what make Mario Kart games so balanced. No matter how skilled racers are, they’re just a blue Spiny Shell away from disaster. A well-timed item can also turn defeat into victory in an instant. The new Super Horn blows away all other items – literally. Sounding the Super Horn issues forth a sonic shock wave that blasts away everything in the vicinity, including other drivers, Red Shells and even blue Spiny Shells. It’s a potent asset, especially for drivers trying to maintain their lead. Mario Kart 8 also introduces the Crazy Eight, a swirl of eight different items that lucky players can use one by one.

New Racers: Two new playable female characters make their debut appearances in Mario Kart 8. New heavyweight driver Pink Gold Peach glows with a golden light and makes a nice counterpart to Metal Mario. Baby Rosalina shows up for a play date with other Baby characters. As in past Mario Kart games, players can again choose to play as their Mii characters, which rounds out the field of racers to an even 30.

You can find the latest info on 'Mario Kart 8' linked from our Video Game Release Schedule.