Naughty Dog Lets 'The Last of Us: Left Behind' Slip Away To Become Standalone Release

Expansion will include upgrades for full game as well

Developer Naughty Dog has announced that critically-acclaimed 'Last of Us' DLC, 'Left Behind', will be released as a standalone downloadable title on May 12th, on both PS4 and PS3, for $10. While a portion of the DLC takes place in the last third of 'The Last of Us's campaign, the game is predominantly a prequel, with Ellie reconnecting with her best friend, Riley, in an abandoned mall, and thus still remains a strong experience even out of context. The standalone will also include a two-hour trial version of the Factions multiplayer mode.

For those who want to finally take the plunge on more of the game, Naughty Dog is offering a few ways to digitally upgrade. If you simply want to continue with the multiplayer, the full mode can be purchased for an extra $10. Choosing to buy the full game after that will cost an additional $29.99 on PS4/$19.99 on PS3 if you bought the multiplayer first, $39.99 on PS4/$29.99 on PS3 without. Alternately, of course, you could always buy the full, physical copy of the game on either system, with 'Left Behind' being free included with 'Last of Us: Remastered' on PS4, and Sony lowering the price of the DLC if you buy 'The Last of Us' on PS3.

You can read our full review of 'Last of Us: Left Behind' here. 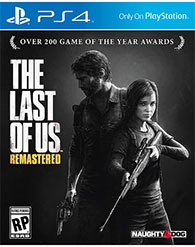