New trailer as well. Also, we're so so sorry that rhymed.

Microsoft has finally managed to nail down 'Quantum Break's date with destiny as being on April 5th. The wild news, however, is just how much bang Remedy's planning to give you for your buck.

For starters, if you pre-order the digital version of the game, either via the Xbox Store, getting a download token from retail (Best Buy, Gamestop, etc), or by pre-ordering the also-just-announced Xbox One console bundle, will get a copy of the game for PC as well. Granted, the PC version comes out the same day, and, if I may direct your eyes to the PC requirements below, the game needs crazy high specs, but hey, a free copy is a free copy is a free copy, and the fact that Microsoft is keeping to their promises to throw PC support a bone more often is to be commended, really. 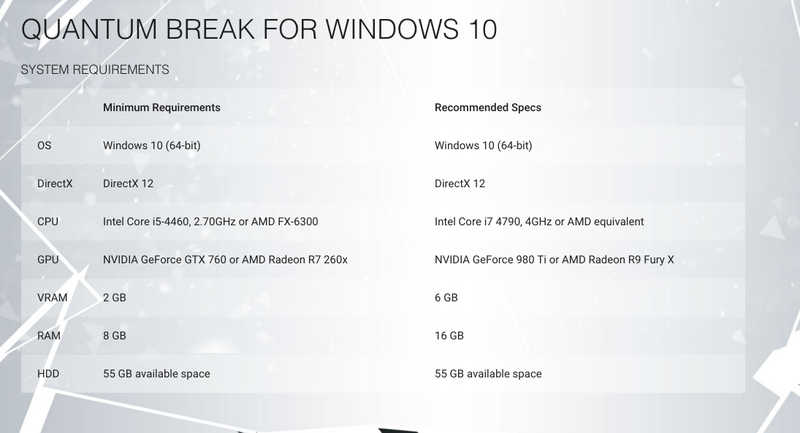 The good news everybody can appreciate, though, is that EVERY copy of the game will include a download code for the 360 version of Remedy's previous title, the still-woefully-underappreciated 'Alan Wake'. That, in turn, will come with the two ambitious DLC story add-ons, 'The Signal' and 'The Writer'. Needless to say, that's likely also a tacit announcement that 'Alan Wake's coming to the Xbox One's backward compatibility program the same day for folks who don't plan on throwing down for 'Quantum Break'. Even better, folks who pre-order also get 'Alan Wake's American Nightmare', which was just announced today as being part of the program, for free. So, just to tally here, pre-ordering the game gets you three games, plus DLC, and a PC port for the new one. Let it never be said Microsoft doesn't know how to drive a hard bargain.

The cherry on top of this sundae is a new live-action trailer released for the game, showing Shawn Ashmore making a Bruce Wayne-y promise to a loved one in a graveyard where timey wimey seems to be going a little more wibbly-wobbly than usual. Take a look below, and, you know, you might wanna consider pre-ordering the game while you're at it.