'The Phantom Pain' was having issues with its online servers right from the start, which Konami managed to slap a Band-Aid on at the day of release by scaling back a few of its online-dependent features. Apparently, this wasn't enough, because as of the time of this writing, the servers for all five platforms of the game--Xbox One, 360, PS4, and PS3 are completely offline. 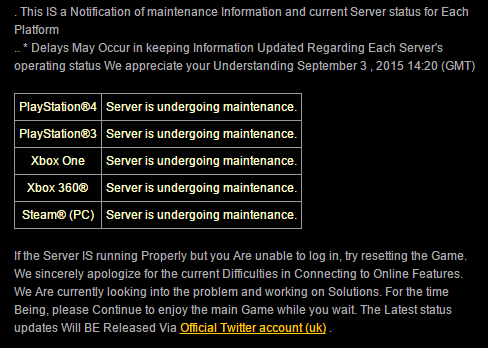 This might not be such a big deal if, like a lot of AAA games of late, the online portion wasn't (ahem) snaking around virtually everything you can do in game, not just the Foward Operating Base used for the game's multiplayer features. To wit, many users, already, report that the game's menus have started loading at a snail's pace.

We'll keep you posted if/when Konami brings the mode back online, as well as what they plan to do about the planned daily bonuses for logging into the F.O.B. mode.

UPDATE 9/4 10:03 AM PDT: Online service is not back to normal on PS4 as well. Konami states "measures have been taken to reduce burden on database," but also that "FOB multiplayer service may still take some to be fully restored."