'Disney Fantasia: Music Evolved' Demo Out Now for the Xbox One and Xbox 360

Now it's time to try out the Kinect focused music title.

The 'Disney Fantasia: Music Evolved' demo is out now on the Xbox One (download here) and the Xbox 360 (download here, but does require Xbox Live Gold Membership). The game quite famously was built around combining the Disney animated musical opus with Harmonix (Rock Band) rhythm game styling and the one and only Kinect on both the current and last-gen Xbox systems. The Xbox One demo is 1.67GB, and the full version (5.88GB) is due out on October 21st and can be pre-ordered here.

From Microsoft, "Disney Fantasia: Music Evolved is a breakthrough musical motion video game inspired by Disney’s classic animated film “Fantasia.” Featuring more than 30 songs and 60 remixes, Disney Fantasia: Music Evolved empowers you to create {and share} your own versions of current hits, classic rock, classical music, and more. Perform your favorite songs from Imagine Dragons, Queen, Drake, Nicki Minaj, Bruno Mars, AVICII, The Who, The White Stripes and many more. Your Kinect puts you in control of some of the world’s best known songs, changing them in intuitive and surprising new ways as you play. Experience music in a brand new way!"

You can find the latest info on 'Fantasia: Music Evolved' linked from our Video Game Release Schedule. 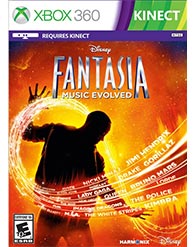