The ups and downs of the console RTS.

'Halo Wars' is (currently) an Xbox 360 exclusive released in 2009 by Ensemble Studios, a Microsoft subsidiary shuttered around the time of the game’s release. It is unusual in that it is a RTS designed specifically for consoles, and in spite of this was pretty good. The sequel has been in development by Creative Assembly (the 'Total War' series, 'Alien Isolation').

Making an RTS on a console is tough, I have to believe. Not only does Creative Assembly have to create a game with no built-in genre audience (the strategy crowd makes its lair on PC, as it has done since the dawn of time), but they have to contend with the large, fervent 'Halo' community. As if that weren’t enough, the limitations of the console controller and hardware create a unique trifecta of "don’t bother", and it’s hardly surprising that there is a dearth of full-blown strategy titles on the Xbox One or any other console. 'Halo Wars' and a handful of other games have found niche appeal in this otherwise stark environment, and Microsoft wants to roll the dice again with 'Halo Wars 2'. 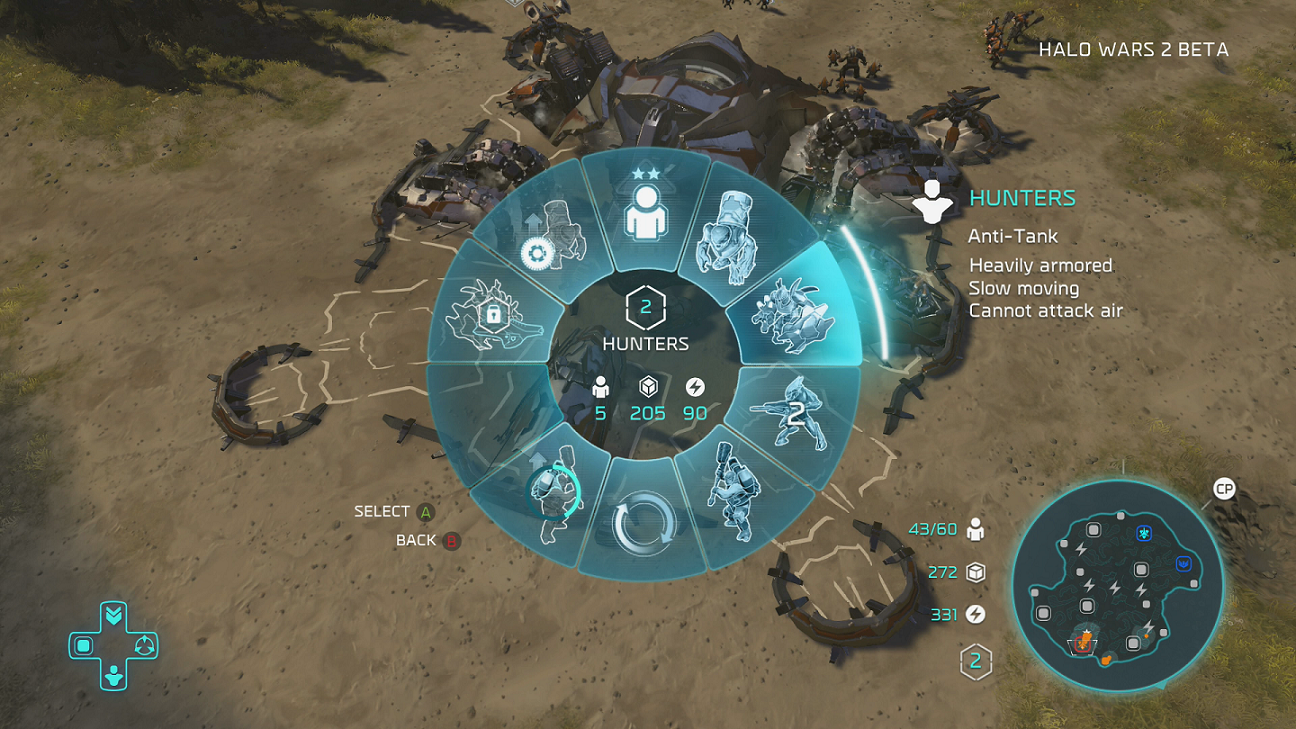 The open beta, at least what I was able to experience, was 2v2 PVP matches only. No bots take over in the event of a player quit/disconnect - if someone bails, their bases and units are destroyed and the match carries on. In my first match, my partner quit right out of the gate, and I was left with the task of dismantling two human opponents. Rather than quit myself, I decided to make a go of it. I chose the Covenant faction led by a shaggy alien who might be a Brute, and began to create a massive army of infantry, from cheap little suicide grunts to savage hunter pairs and intimidating warlord heroes. 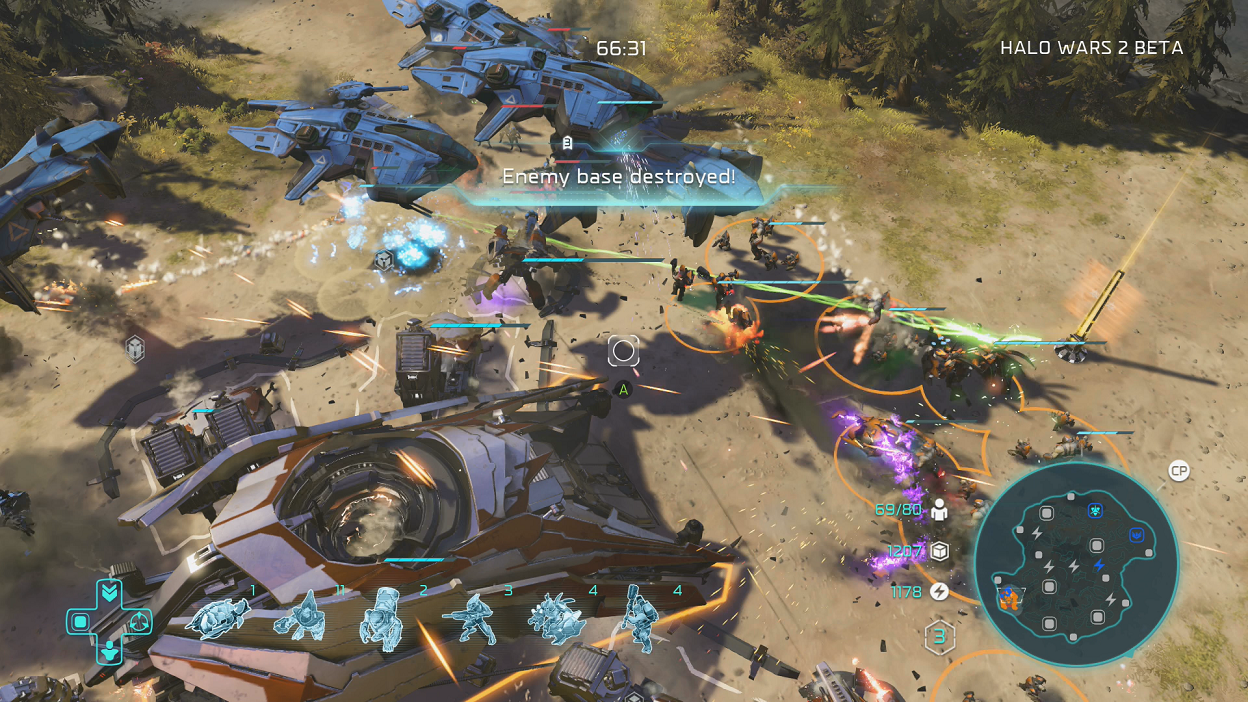 The mechanics are easily learned for anyone with RTS experience, particularly RTS experience of the 'Halo Wars' variety. Unlike more conventional games such as 'Starcraft', resources are not collected primarily by units in the field (although there are small pockets of stuff scattered around the map). Instead, supplies and electricity, the two currencies of construction, are accumulated by crafting the appropriate buildings at the base, which take up building slots. More slots can be added by upgrading the ship, but even at maximum size, more than one base is necessary for creating diverse armies. Infantry, vehicles, aircraft, and heroes all require separate facilities for production and upgrades. Being in the corner of the map by myself, I first made a heavily guarded main production facility, with heavy turrets and shielding. Then I staked out smaller outposts at two adjacent plots and used them to farm resources, with cheap defenses and only a few token guards. These outposts were extremely expendable and, since they paid for themselves quickly, could each be reproduced in just a few minutes. 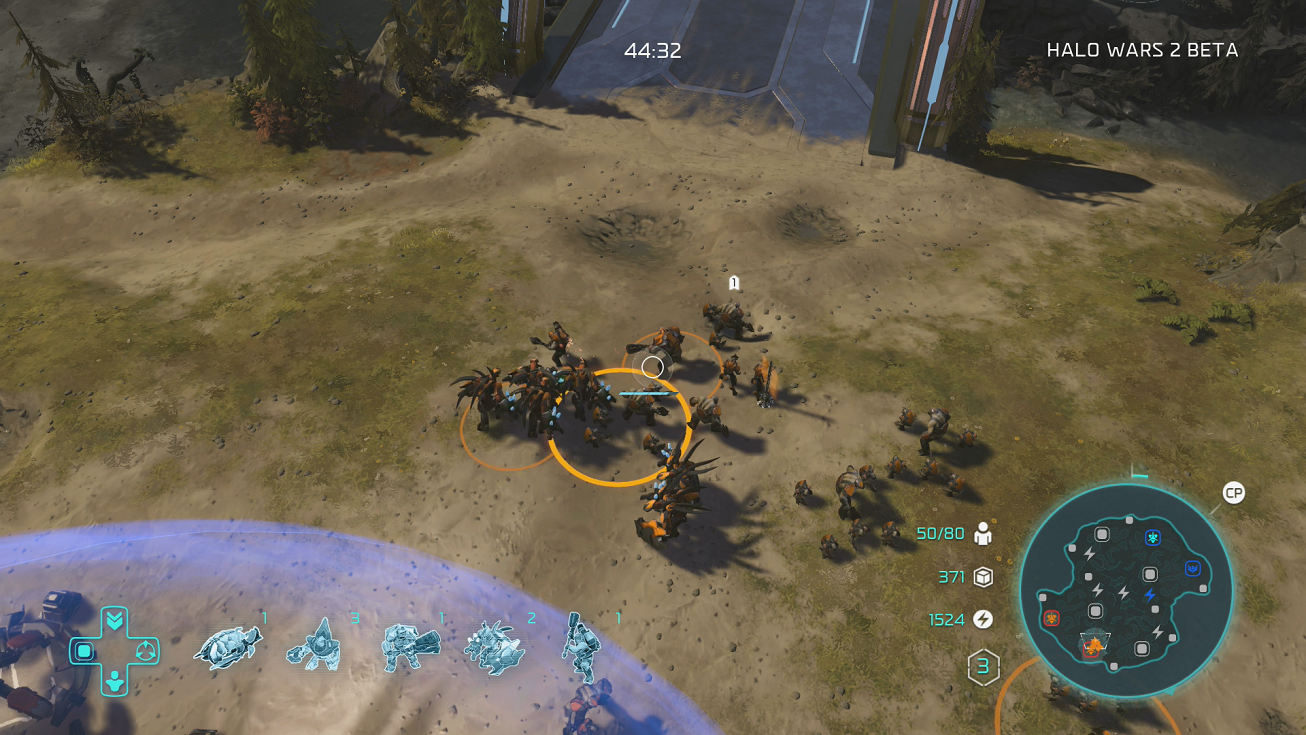 The first attack took a long time to come. I doubt that my opponents were communicating with one another, as they never attacked simultaneously, which would have probably killed me instantly. Instead they were content to trickle in smaller forces that were incapable of dealing any serious damage and resulted only in feeding veterancy to my units, making them more powerful. I never developed ground or air technology as I didn’t have the time - after every attack I needed quick troops again, and so I stuck with infantry. 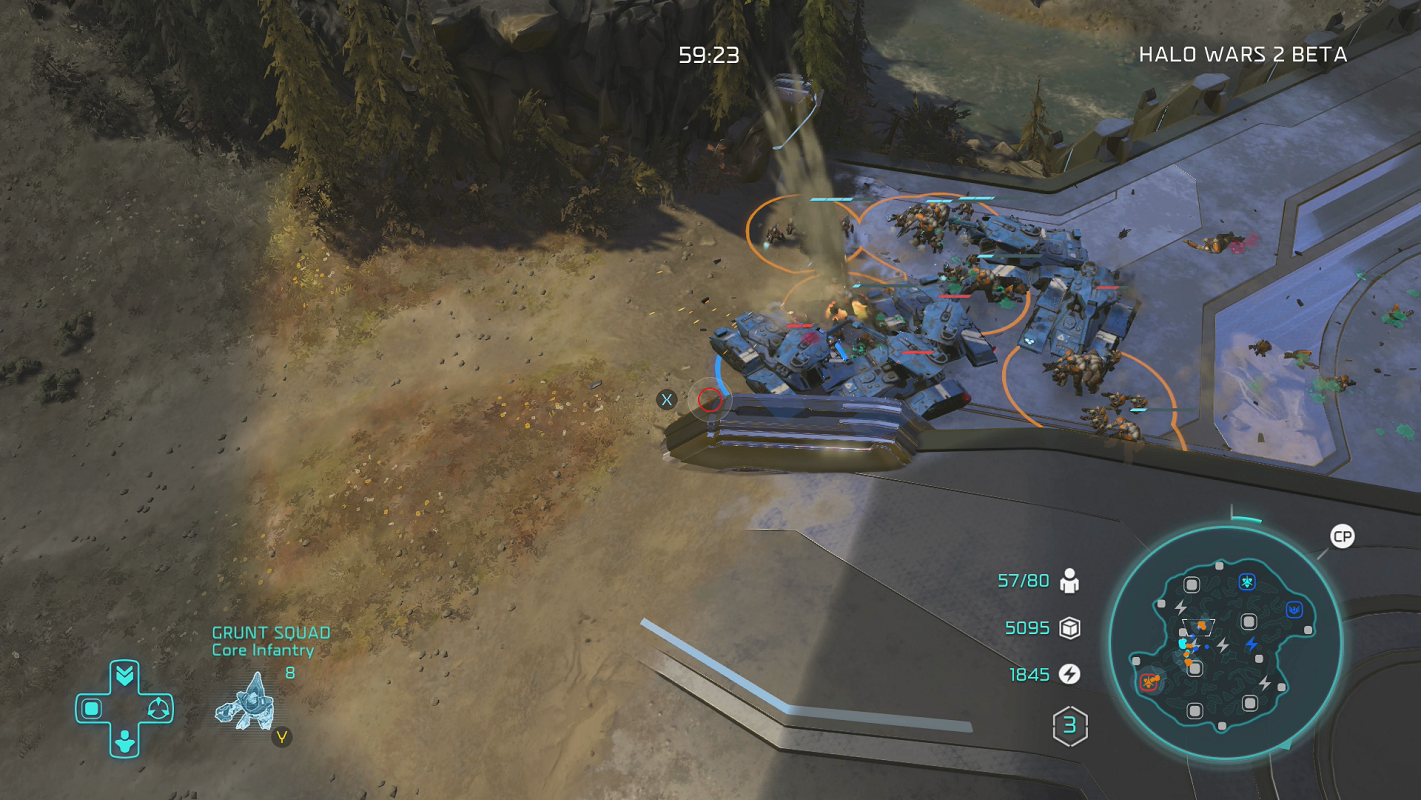 As I did base-building things and fought off incursions, I received commander points with which I could access an upgrade tree and make sweeping changes to my faction or buy powerful commander abilities to be used at will on opposing forces. My commander has two abilities that, when used properly, won the game for me: a huge healing bubble and and a short invulnerability timer. I waited until the humans used their orbital strike capabilities (very expensive and with a long cooldown), activated my invuln, and watched my hardened infantry completely wipe out their air forces. I was never able to amass enough forces to both defend myself and erase their bases, but I created enough attrition to bully them both into quitting.

That is the kind of RTS multiplayer gameplay that the fans of the genre can get behind, and so far it looks like Creative Assembly can deliver that kind of action. There are definitely problems with the interface and controls, many of them straight from 'Halo Wars' and the kind of thing that might just be impossible without a mouse and keyboard. Foremost among these is the army segregation. Turning a large unwieldy army into smaller units is itself unwieldy, and I resorted to simply giving local commands and hoping that my base defense force wouldn’t accidentally trot out with my attack force and leave my home undefended. Switching between bases is also tedious, not to mention having any kind of decent APM (action per minute) rate with a controller. It is a stripped-down RTS experience and not a bad one by any means, but if you’re coming in with 'Age of Empires' or 'Command and Conquer' expectations, you’re going to be disappointed. 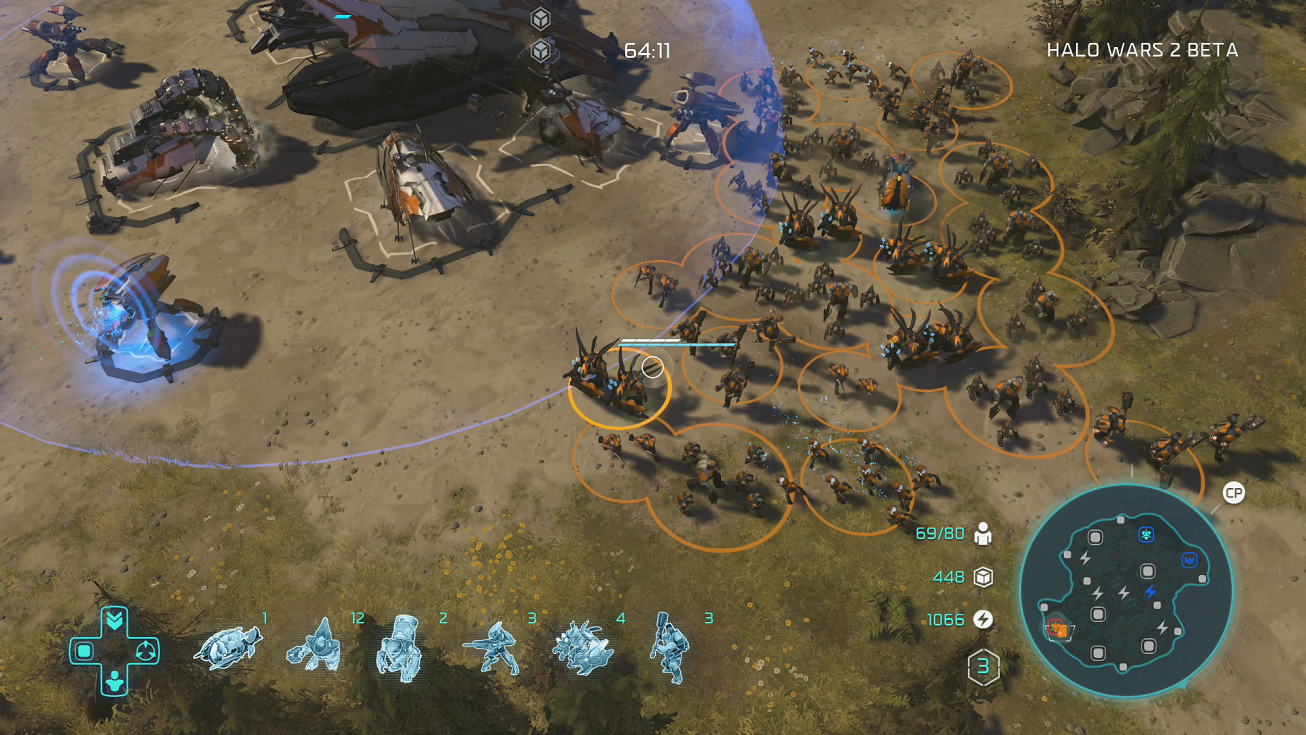 The less ethereal aspects of 'Halo Wars 2' are not as promising. I was able to mostly play games through and have decent matchmaking, but many were not. Bugs and problems were common, as was a huge framerate loss whenever I activated an orbital weapon or other dramatic effect. It is probable that the opponents who disconnected did so because the servers made them, especially early in the game when no one has been attacked yet. Textures and audio quality have a high level of production value as is fitting for the golden goose of 'Halo', but there was no campaign content or anything else for me to judge.

You can find the latest info on 'Halo Wars 2' linked from our Video Game Release Schedule. 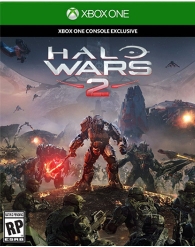