Nintendo is being very quiet on the backwards compatibility capability of their NX, so for now, it's only a Wii U that can really play Wii U games. And when it comes to current Wii U owners (myself included), the two month-old 'Star Fox Zero' is one of the only significant Wii U games of 2016.

Right now, the disc version of 'Star Fox Zero,' which includes 'Star Fox Guard' bonus game, is available for 37% off. That makes for a price of around $38.00. (Order here.) 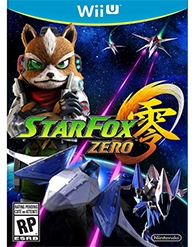