Purchase a Xbox One Next Week And Get Any Single Xbox One Game For Free, Including 'Destiny,' 'NHL 15,' etc.

'Destiny' launch week a perfect time for a promotion.

Today. Microsoft announced that for one week only, (September 7 – 13), those who buy an existing Xbox One bundle can pick any released Xbox One game to receive for free. This offer applies to both 'Destiny,' 'NHL 15,' which are due out during the promotion. Buyers can pick from any existing released bundle, without Kinect, with Kinect, with Madden, with Forza (the free game will be in addition to any games in the box). 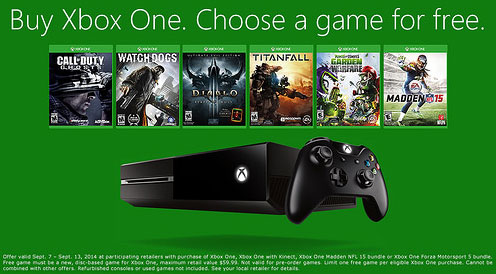 With next week, being the 'Destiny' launch, there will be plenty of new consoles being sold.  This free game offer is like to attract plenty of new buyers.

From Major Nelson "And it really is your choice: Whether you want to lock-and-load with your friends in Destiny or Titanfall, face the legions of hell in Diablo III: Ultimate Evil Edition, hack the planet in Watch Dogs, or hit the sports arena of your choice in Madden NFL 15 or NHL 15."

"This offer is valid for any retail Xbox One game, and the offer is good for our Xbox One system bundles, too – so if you want to pick up the Xbox One Madden NFL 15 Bundle or Forza Motorsport 5 Bundle, you’re getting another free game of your choice priced at $59.99 or lower on top of the bundled game."

"Here’s the fine print: Offer valid September 7-September 13, 2014 at participating U.S. retailers with purchase of Xbox One, Xbox One with Kinect, Xbox One Madden NFL 15 bundle, or Xbox One Forza Motorsport 5 bundle. Free game must be a new, disc-based game for Xbox One, maximum retail value $59.99. Not valid for pre-order games. Limit one free game per eligible Xbox One purchase. Cannot be combined with other offers. Refurbished consoles or used games not included. See your local retailer for details."