Commemorate the Era of Kinect by Picking Up The Xbox One Launch Title The 'Fighter Within' For Only $8.99

As of today, Amazon is offering the Xbox One launch title the 'Fighter Within' For Only $8.99 (78% off the normal price). The game is one of the few Xbox One titles built around Kinect and was billed as "Making full use of the XBOX ONE and the new generation of Kinect sensor's exclusive technology."

From the High-Def Digest Review of the Xbox One exclusive the 'Fighter Within:'

"Conceptually, the game is supposed to walk you through various fighting styles and copy the player's movements using the Kinect. In reality, it's anything but that. By the way, it's the spiritual successor to Ubisoft's poorly reviewed 'Fighters Uncaged,' an early attempt to showcase the original Kinect on the Xbox 360." 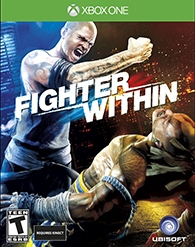