Ubisoft Unviels 'Far Cry 4' for the Xbox One and PS4

Game coming this November for both next-gen and last-gen consoles as well as PC.

Today, Ubisoft officially announced 'Far Cry 4.' The game is coming to the PS4, Xbox One, PS3, 360 and PC on November 18th in North America and November 20th in Europe. Unlike the lush island jungle of 'Far Cry 3,' the new game is set in Kyrat, "an untamed region currently ruled by a despotic self-appointed king."

'Far Cry 4' is being developed by Ubisoft Montreal in collaboration with Red Storm Entertainment, Ubisoft Toronto, Ubisoft Shanghai and Ubisoft Kiev. Ubisoft is waiting until its E3 briefing to show more, but they have revealed a pre-order tie in with 'Far Cry 3.'

"Seems like you can’t keep a crazy man down. The popular nutjob from Far Cry 3 returns in Far Cry 4 in a series of three single-player missions, available in the game’s Limited Edition. The great news: pre-order Far Cry 4 and you’ll receive a free upgrade to the Limited Edition, which not only includes the Hurk’s Redemption missions but also The Impaler – Hurk’s hefty harpoon gun. Pre-orders are available now through all major retailers." 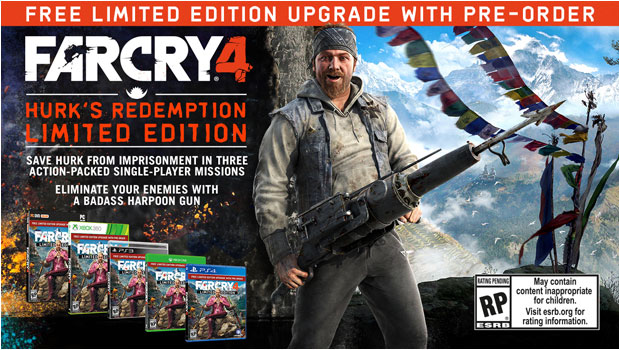 You can find the latest info on 'Far Cry 4' linked from our Video Game Release Schedule.