Why We Fight: What We Know About 'Battlefield 1' So Far

Yesterday, we were blitzed with our first true look at 'Battlefield 1', which will be taking place during the Great War. While hard and fast details on plot were thin on the ground, one particular outlet, GamesBeat, managed to score an interview with Daniel Berlin, the game's lead designer. While his interview has its share of no-go areas, he did managed to wring some huge bullet points out of him about the direction the game's going.

--There have been rumors galore since the trailer dropped that we'd be looking at a 'Wolfenstein'-style alt-history version of the Great War. That's apparently not the case. "It’s definitely rooted in history. There’s no alternate mix of anything else. All the stuff you see is equipment that was available. All the vehicles you see were available at this time."

--We are gonna see some perspectives we haven't seen in a WWI game before, though, including, as seen on the cover image, one of the Harlem Hellfighters (and good lord, Google this,and be amazed). But that's apparently tip of the iceberg. "When we set out on this game, we wanted to depict not just the common view of what the war was like. We wanted to challenge some preconceptions. We want to delve into some of the unknowns of World War One. Maybe people don’t know that this person fought or that person fought, that this army was involved. We’re stretching out and bringing all those stories into the game." 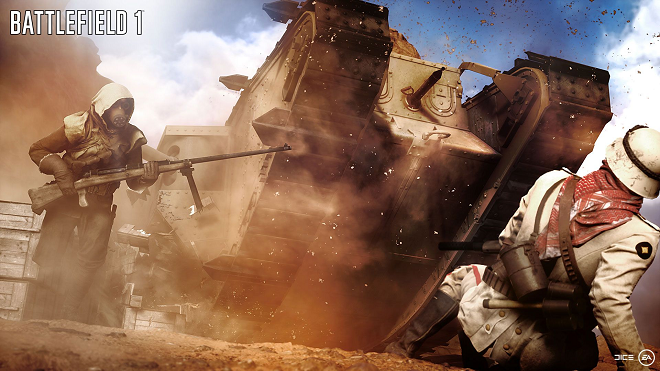 --Yes, vehicular combat is gonna be a big deal. The trailer confirms that yes, you'll at minimum have a tank class, and some aerial combat. Horseback sounds like it might be a thing as well, considering the Bedouin charge we see in the trailer, but nothing official yet.

--Yes, DICE remembers how shaky 'Battlefield 4's multiplayer launch was. They're trying to avoid that. "It’s a focus for us. We know it was a difficult launch. We’ve been working on this for a long time. We released 'Battlefront', which did really well. We’re pushing an open beta to ensure stability. We’ve taken a lot of learnings from that experience, and we feel like we succeeded with 'Battlefront'. We’ll take everything we learned there and apply it to 'Battlefield 1' as well."

You can and should read the rest of the interview over this way. What's plainly obvious from everything, though, is that DICE is putting some serious work into making this great.