If it only came with 'SimCopter.' 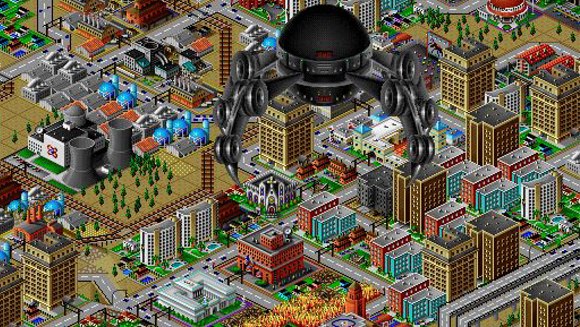 It's all part of Electronic Arts' On the House program. Download it here, and yes, it does require Origin.

Here six suggestions from EA on things to do in 'SimCity 2000: Special Edition'

Build a city... and destroy it. Yeah, you knew this was coming. One of the things that makes SimCity 2000 so fun is building a sprawling metropolis, and then unleashing disasters to watch the whole thing crumble. There are a bunch of different disasters to choose from, giving you bountiful opportunities to burn down everything you've created.

Watch WillTV. Game designer Will Wright is a visionary, and we're not just saying that because he's responsible for SimCity, The Sims, Spore, and a number of other great simulation games. He's also just super interesting to hear speak, and you can do that in SimCity 2000. Select Will TV from the menu and you can hear him wax philosophical on game design, and lay out the direction he hopes to see gaming move as technology evolves.

Load up a Scenario to learn about the past (and future) from Maxis. Fun fact: SimCity 2000's Scenarios are a treasure trove of fantastic 1990s goodness. They provide great gameplay, too, don't get us wrong, but so much of the value comes in finding out about the goofy – and all-too-true – events Maxis cooked up. Washington DC? Overrun by lawless lawyers. New York City in 2007? The site of a nuclear meltdown. It's like a bizzaro alternate reality that you get to rule as mayor.

Shoot down a helicopter. Building an airport will allow you to totally open up your city to travel. It will also cause helicopters to fly around, zooming between your buildings as though they're controlled by hot-shot pilots who don't always play by the rules. But don't forget: you control the skies in SimCity 2000, so hover your mouse pointer over the helicopter, and click on it. Click on it a bunch. Click on it until it explodes and falls out of the sky.

Build an Arcology. You can't really "win" at SimCity 2000, but there are some things you can do that can make you feel like you did. One such victory condition is building an Arcology. These weird buildings are basically self-contained cities, and they look absolutely awesome. Seriously, we're getting so much nostalgic feels just looking at them. Look at them!