Some of the old, a lot of the new.

Editor's Notes: 'DOOM' MP impressions based off of the Xbox One beta.

We spent some time with the 'DOOM' multiplayer beta over the last few days on the Xbox One, and now it's time for reflection. I’ve been cautiously excited about the game for awhile, as the promotional footage demonstrates a particularly visceral and fast-paced shooter (mostly the campaign stuff). Any 'DOOM' title, especially a reboot and not 2012’s kind of meh remaster, carries with it a boatload of expectations. The first game was released way back in ‘93 when the Internet as we know it today was still a twinkle in Al Gore’s eye. That game revolutionized the role of the first-person shooter, a genre that you may be familiar with. id Software is still the franchise’s custodian, although in the intervening years they have been purchased by ZeniMax (Bethesda’s parent).

The beta started innocently enough, with two gametypes, two maps, and a half-dozen weapons. Before I even started a match, I found myself in a mess of customization and loadout menus, something that I am more accustomed to in modern military/sci-fi shooters and wasn’t necessarily expecting in a reboot of the granddaddy of the FPS. But ok, no problem I thought, this will still be different from all of the console multiplayers I’ve been tooling around in for years, where noob players are stuck with garbage loadouts while the elders get nice stuff. Some things were withheld from me temporarily, like custom loadouts, higher-level hacker kits (temporary buffs that activate upon respawn) and the vampiric siphon grenade. 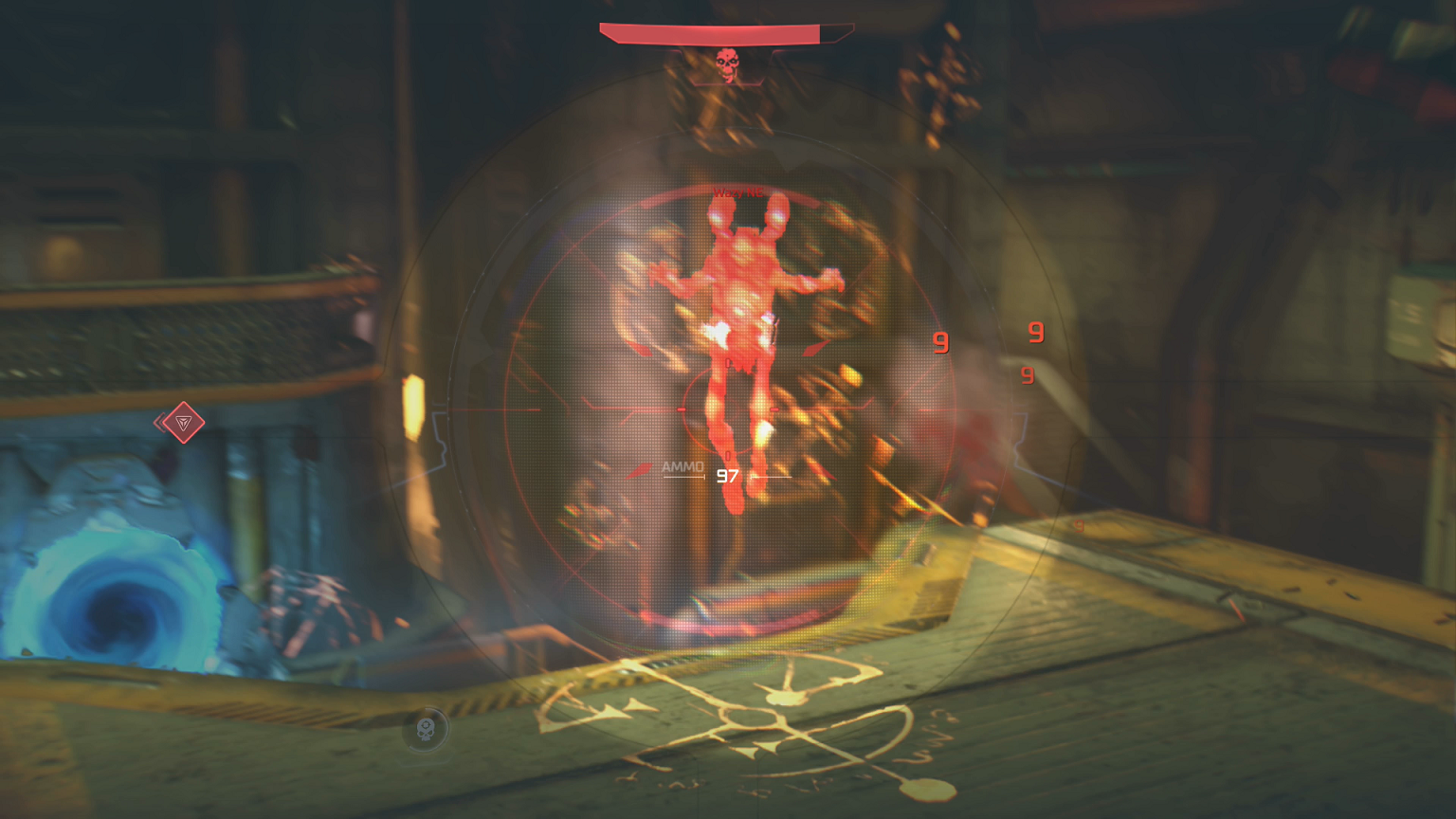 I jumped into my first match and discovered that player speed is pretty high, but not quite high enough, and there is no sprint. One of the tried-and-true trappings of the arena shooter (itself popularized in part years ago by 'DOOM') is the philosophy that if you stop moving, you die, and 'DOOM' has kind of adopted this mindset, but not with full commitment. There are a few additions to the movement, like a double-jump and a clamber animation when I couldn’t quite make it up to the ledge. Overall it is between modern shooter speed and classic arena speed, which is a weird place to be.

The weapons are wonky too. They have some balancing issues, like the shotgun, which is only a melee weapon - back up even an inch and you might as well swap out. The assault rifle shoots marshmallows, and don’t even get me started on the rocket launcher - a primary weapon that dishes out very little damage and also doesn’t really push players around. Once I unlocked custom loadouts, I equipped the shotty and the charging railgun, which is a one-shot on a full charge and really annoying to use on people from across the room as they emerge from teleporters (it will see a nerf, if I had to guess). Little numbers fall off of each space marine when hit, but they only serve as a distraction because it seems unlikely that I was doing 200 damage to unshielded guys and they weren’t dying. Speaking of shields, there are some old-school, arcade pickups lying around on the floor and floating over lava pools. There’s health and ammo (guns do not seem to reload in multiplayer, which is refreshing), and cooler stuff like overshields and quad damage.

The super buffs aren’t necessarily overpowered, because their benefit is short enough to not be an issue, but the demon spawn definitely is. One demon was available, the jetpack-powered, rocket-wielding revenant, and it is nearly unkillable in the right hands. It does have a timer, but can easily one-shot enemies and avoid damage with its jetpack, and so matches weren’t about who were the better combatants, but who could control the demon rune the most. It was frustrating being on the receiving end of it and kind of boring on the giving side, as the enemy team has so little chance of survival. 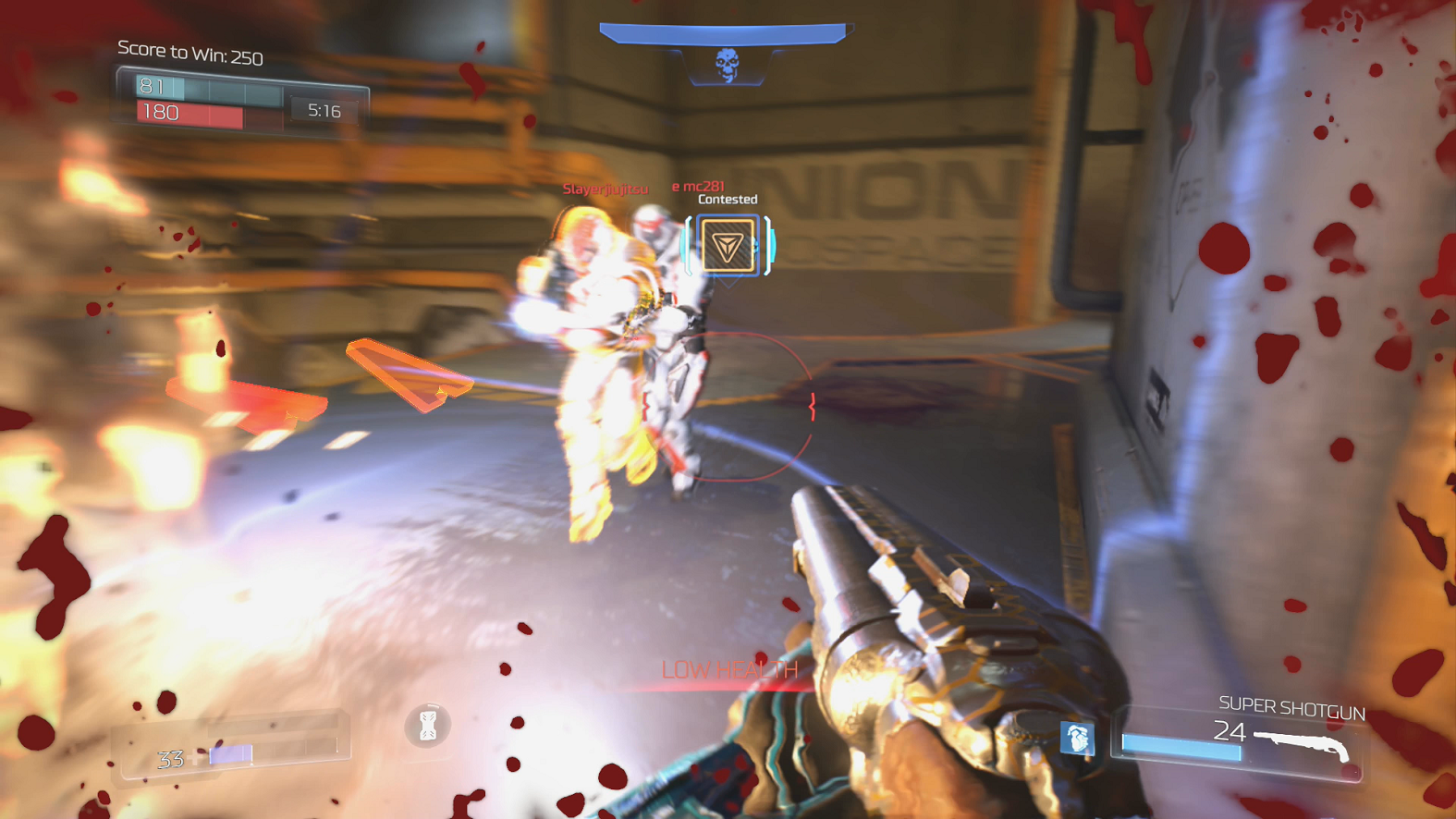 The one thing that I really liked was the warpath gametype. It is a kind of mobile king of the hill, with a platform that moves slowly on rails through the map. I loved ambushing the enemy team while they were inside, converging with my team and wreaking havoc while they desperately tried to rebuff us. If we wiped, we tried again until we could dislodge them, and then defended while they tried the same thing, all while we’re desperately trying to keep up with the ring and stay inside of it to earn points.

I didn’t mind the respawn buffing hacker kits, as they provide nice bonuses like bits of armor or an outline of the last person who killed me, so I could pursue my revenge. Another shows the health bar of each enemy, a godsend in a firefight when there are multiple enemies and I have an opportunity to knock out the weakest one first. Bethesda has promised that they will not be tied with microtransactions, although a DLC/season pass purchase includes some. They’re not really game-changing, but do add a hint of strategy. 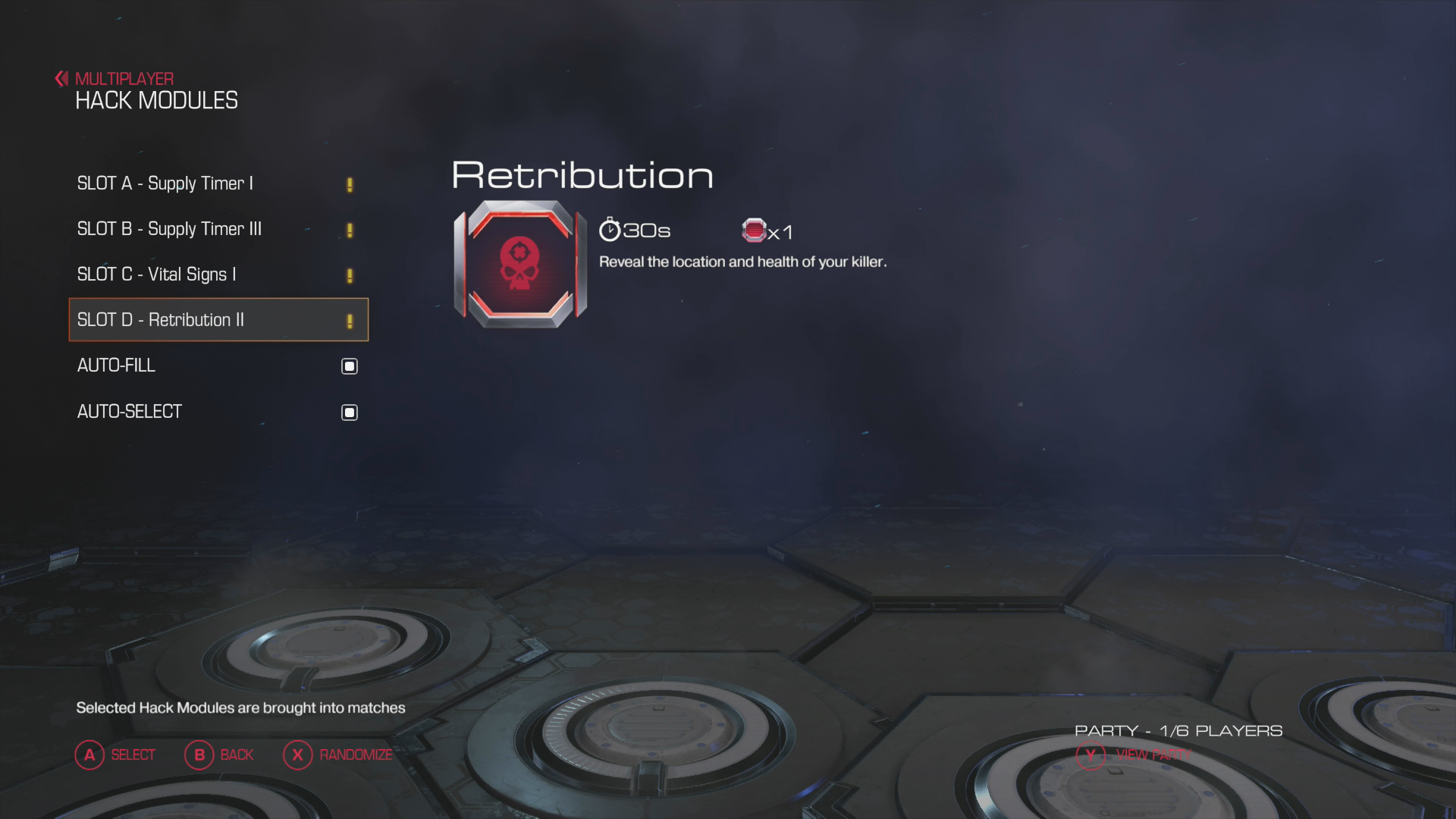 As far as the performance and visuals go, the Xbox One was capable of keeping up pretty well, with some slight slowdown during glory kills (brutal execution animations) and prolonged, explosion-heavy shootfests. There was a great deal of lag and spotty connectivity - hopefully not a shadow of things to come. The video is pleasant if a bit contrived. The space marines look kind of like Spartans or Guardians (considering 'DOOM' is much older than either of those franchises, perhaps the inspiration is circular), and the hellish maps resemble most mainstream depictions of hell, where blood and gore are used as a quick replacement for scarier stuff. 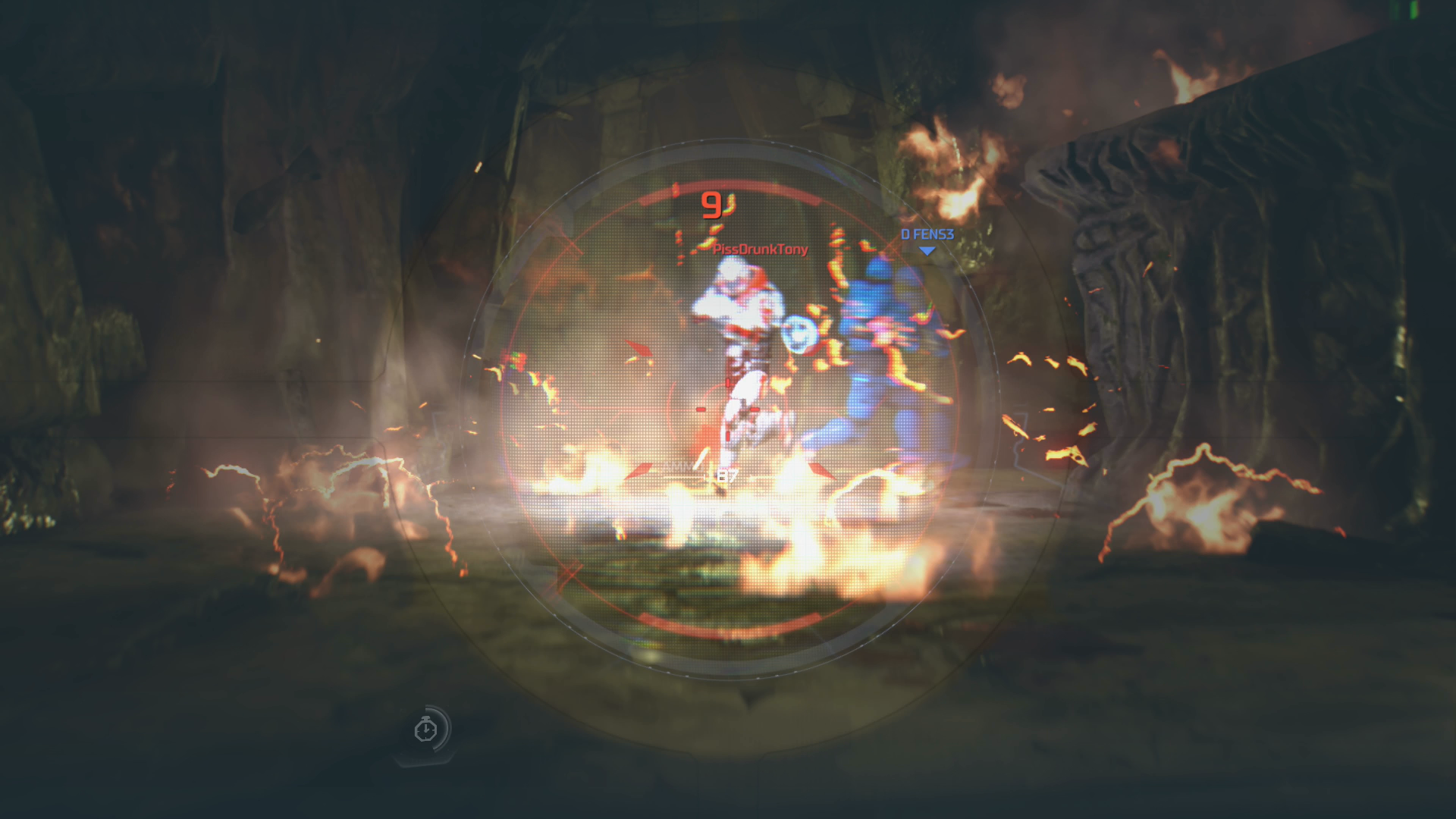 This is a multiplayer-only beta, and a relatively small one at that, and so we must take any impressions with a grain of salt. But as release is less than a month away, I’d wager we won’t see a whole lot of change in the formula. 'DOOM' seems to be straddling the line between progression-heavy modernity and classic running and gunning, but doesn’t quite seem to nail either. If the multiplayer ends up like this, it will be more of an occasional diversion than a pastime - but there’s still hope for a gloriously spastic single-player.

You can find the latest info on 'DOOM' linked from our Video Game Release Schedule.