'Call of Duty: Infinite Warfare's multiplayer beta is currently going on for PlayStation 4 players, and I finally got to go hands-on with Infinity Ward's latest entry in their long-running series. It only took a few minutes of playtime to notice that players of last year's 'Black Ops III' will feel a lot at home here. Players have a near-identical boost jump, can slide, and run on walls. If it feels familiar, that's because it is.

All of this agility returning is a good sign, as 'Black Ops III' played great mechanically. Sadly, just like last year's installment, 'Infinite Warfare's multiplayer doesn't seem like it's designed with this sort of movement in mind. All four of the levels that were shown off were filled with invisible walls that blocked off the top of buildings and objects that are seemingly reachable by boosting, and I found it constantly distracting that the routes I was trying was often met with me falling to the ground instead of going to a higher vantage point. 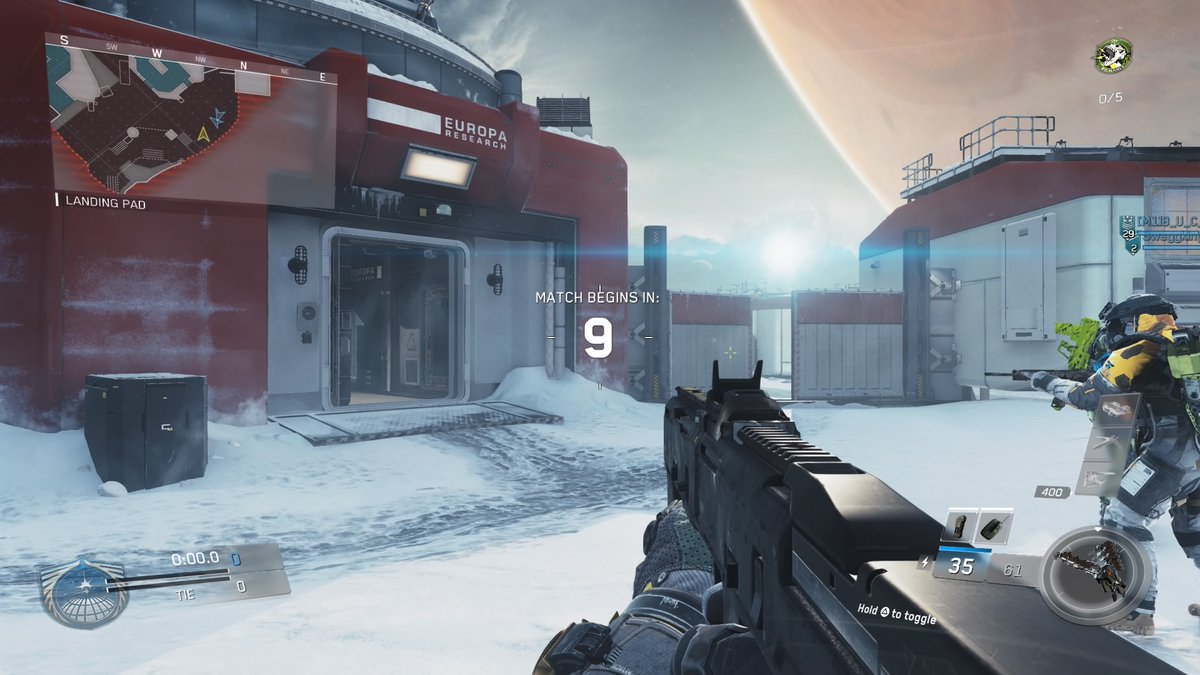 This points to 'Call of Duty' continuing to have a bit of an identity crisis ever since 'Advanced Warfare' released. While Sledgehammer Games' debut moved the series forward and was designed around using boosts, 'Infinite Warfare' seems hesitant to alienate anyone who has enjoyed the corridors of past titles. I feel like the series has to pick a direction to go in sooner rather than later, as of now I'm constantly trying to mantle objects that the game just won't let me do.

After my initial disappointment of 'Infinite Warfare' seemingly not learning from the flaws of 'Black Ops III,' I managed to have a good time. For all of the flak that 'Call of Duty' takes online, there's no denying that the core gunplay is polished and highly satisfying. Nothing beats pulling off headshot after headshot in order to trigger a UAV, and then parlaying that into a more threatening scorestreak (in the beta's case it was a set of three Scorcher jets that start firing lasers at enemies). 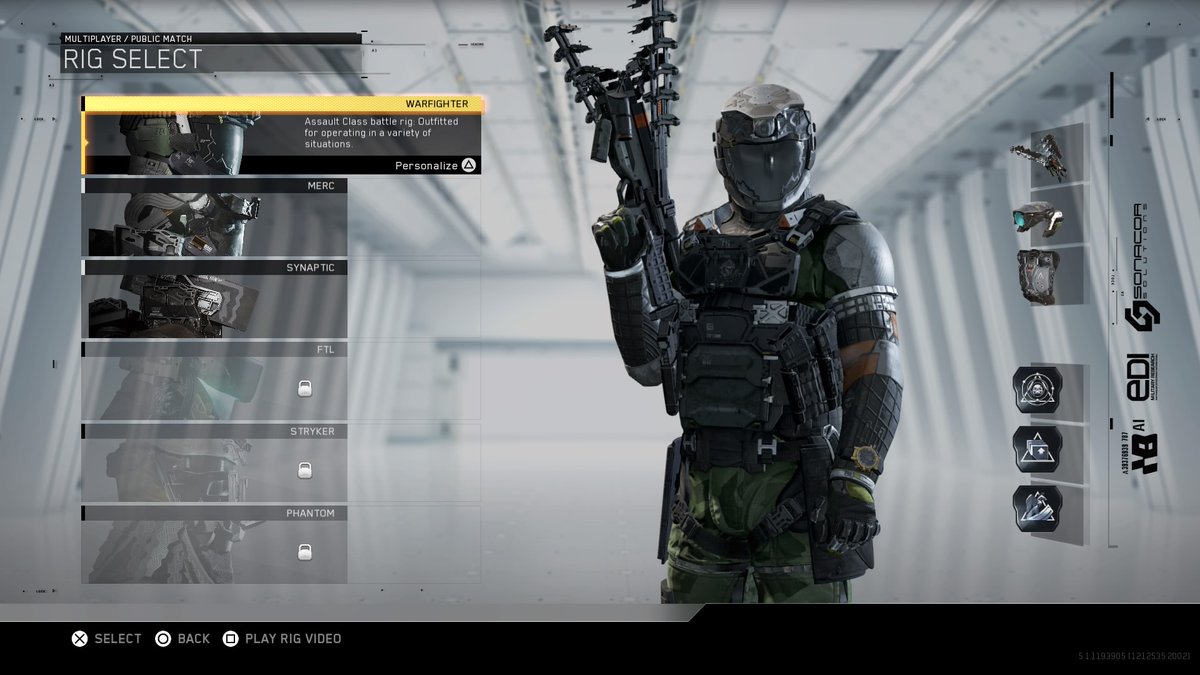 Character classes also return from 'Black Ops III,' although players are choosing different battle rigs to equip instead of characters. The beta featured three classes: Warfighter (an all-around class), Merc (which has a heavy character), and Synaptic (a class focusing on speed). (With the FTL added oday.) Each of these has their own payloads (which are the special weapons that players get during a match) and a character trait (such as getting a speed burst after a kill or regenerating health faster). I mostly used the Warfighter class, and really enjoyed using my special weapon called the Claw. This gun was able to rapidly spray bullets and had a spread like a shotgun. It is worth noting that not every payload is a weapon, as I later unlocked one called Combat Focus that allowed me to gain double my scorestreak for a limited time. Using these abilities efficiently seems like they'll be key to high-level 'Call of Duty' play.

The action was fast-paced on all four of the levels on display here, from the arctic base in Frost to the dual-layered space center in Frontier. The latter ended up being my favorite level that I played since it was set in a contained space (and the two floors makes for a confusing radar which leads to a lot of confusion). This meant that I wasn't attempting to get on top of objects too often, and thus wasn't running into invisible walls repeatedly. The other three levels are all set outside and are relatively open. 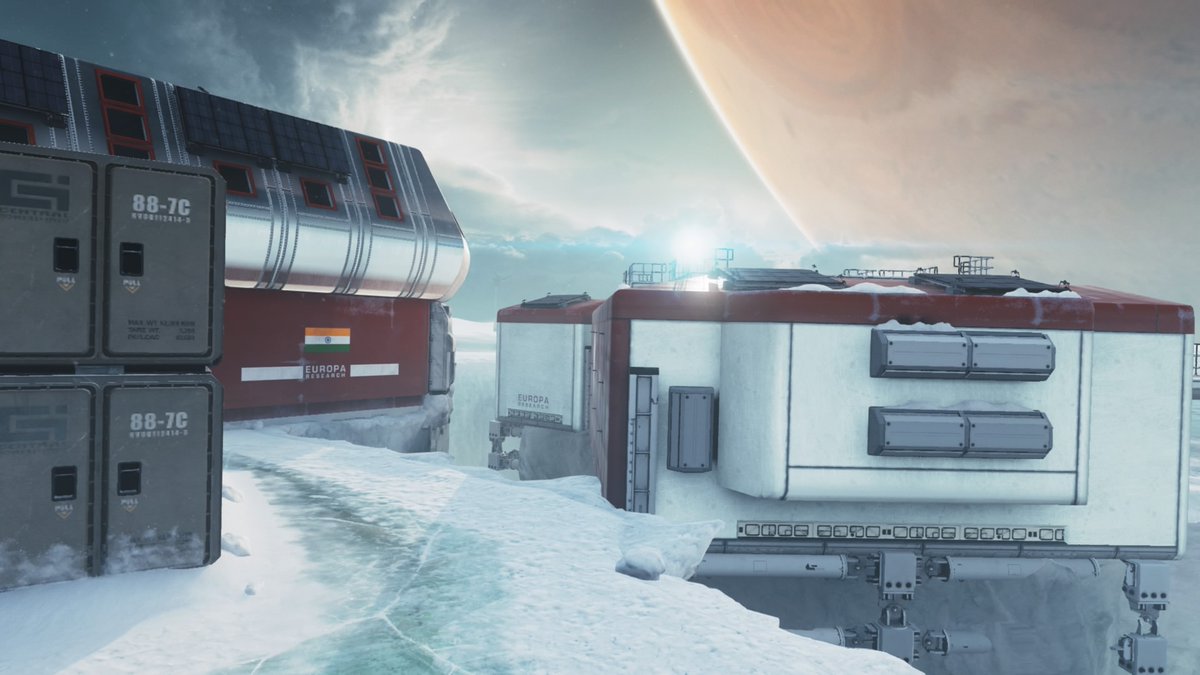 Frost fills the need for seemingly every 'Call of Duty' game to have an arctic level filled with snow. It looks gorgeous and the design is totally fine, but it's such a tired idea for a level at this point. The other two maps (Throwback and Precinct) are a bit more original, thankfully. Throwback is set in a tourist attraction that is modeled after 1950s Americana. Featuring plenty of buildings (although most are just background flavor as you can't actually go into them, sadly) such as diners and bowling alleys, and it's just a fun map to boost jump around in. The other map is based in the streets of Japan and is called Precinct. Much like Throwback, there are a ton of interesting looking Japanese stores that are just unavailable.

I'm really not sure why this bothered me so much, but the most interesting parts of both Precinct and Throwback were the awesome stores that made up the backgrounds. Sadly, despite being equipped with a gun, I couldn't break through their glass windows and actually explore these locations and use a store's items as cover. Instead of letting players battle it out in interesting locales like that, 'Infinite Warfare' instead makes the action happen solely on the streets. This seems crazy to me, and would be like if 'Modern Warfare 2's Terminal map only allowed players to fight in the airport hallways and not to venture into any of the stores there. Needless to say, I wasn't quite enamored with the level designs I saw as they look pretty, but mostly feel like a tease of what could be more interesting stages to play. 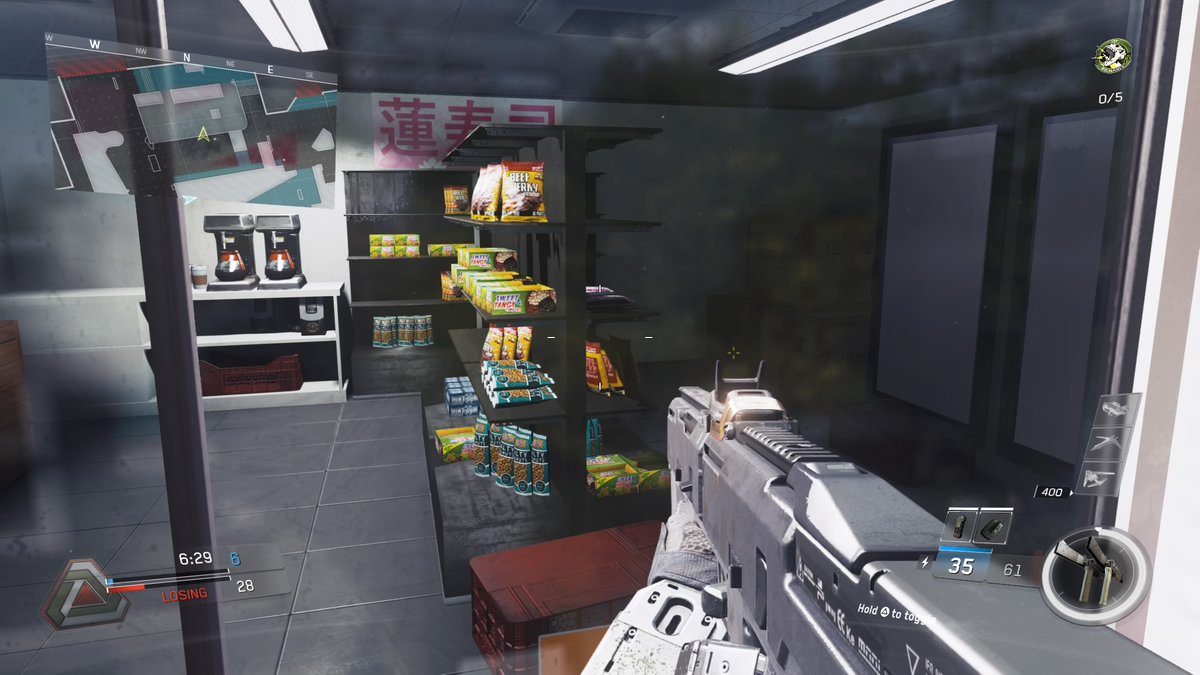 During the beta there were four separate playlists to choose from: Team Deathmatch, Domination, Gun Game, and Mixed. Most of these should be known to 'Call of Duty' fans, but I'll run down them quickly. Team Deathmatch has 12 players competing on two teams in order to see who can rack up the most kills, and Domination is all about capturing points on the maps. Gun Game is one of the more unique mainstays of the series and has all players starting off with a pistol and then getting different types of weapons with each kill. I found this mode to be incredibly fun as it forced me to use a lot of weapons that I normally wouldn't use (I typically just use assault rifles) and it took me out of my comfort zone. Finally, Mixed throws players into a few different variations. The two I encountered were Defender (which has players trying to keep a drone out of the hands of the other team by carrying it around) and Kill Confirmed (my favorite mode in the series that forces players to pick-up dog tags after they kill an enemy).

While the core gameplay found in 'Infinite Warfare' is a lot like past games, there are some nice changes that are helping multiplayer get its hooks into me. While I was playing online matches, the game was constantly bringing up "missions" for me to complete. These ranged from simple stuff like getting 10 kills in a round to trying to get a kill using a specific type of weapon. Much like 'Destiny's bounty system, this gave me an additional goal to play for while grinding in multiplayer, so it was definitely appreciated. 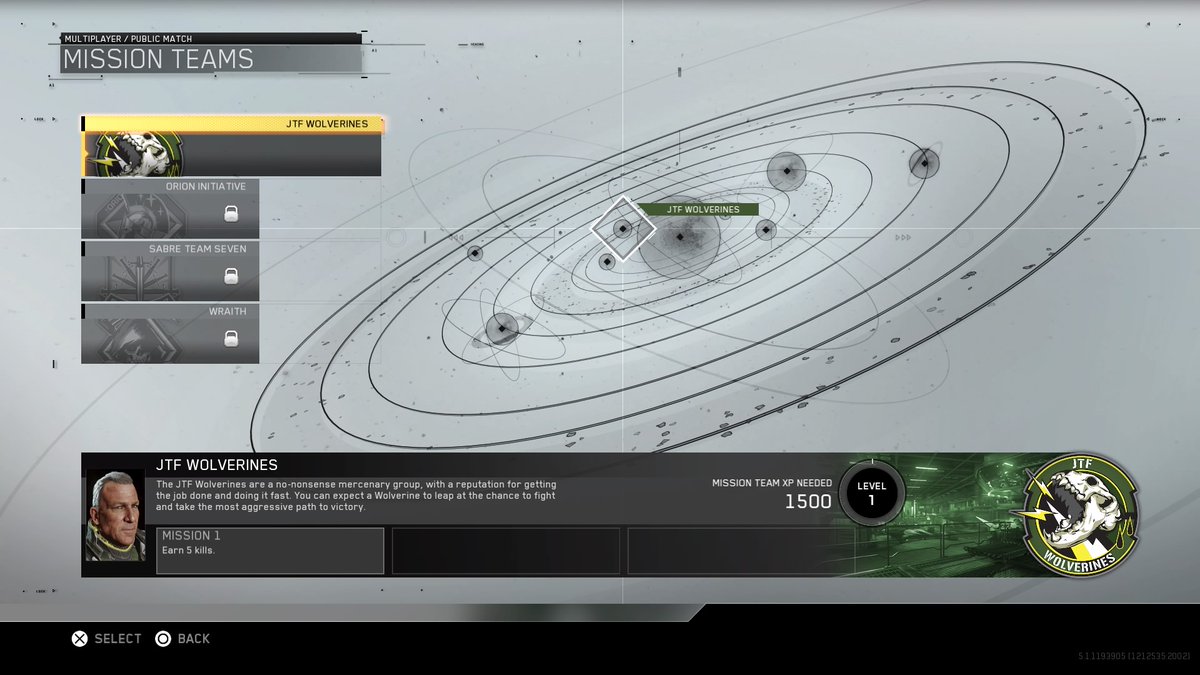 Successfully completing missions feeds into the game's team system that has players picking one of four mercenary factions (although only the JTF Wolverines were unlocked initially in the beta) which then allows players to purchase exclusive "prototype weapons" in the game's armory. Basically, the armory allows players to upgrade their weapons so that they automatically hold a perk (or two). For example, the fully upgraded Epic version of the NV4 assault rifle featured the precision and focus skills which gave the gun infinite range and reduced idle sway.

These upgrades are purchased with an in-game currency called Salvage, which players get at the end of matches alongside the game's other currency called keys. Keys can be used to purchase supply drops, which includes items, taunts and banners for decking out your 'Call of Duty' clan tag. The beta features two types of supply drops (common and rare) with the more expensive one costing 30 keys opposed to the 10 for a common one. A rare supply drop guarantees at least one rare item, and includes bonus Salvage. 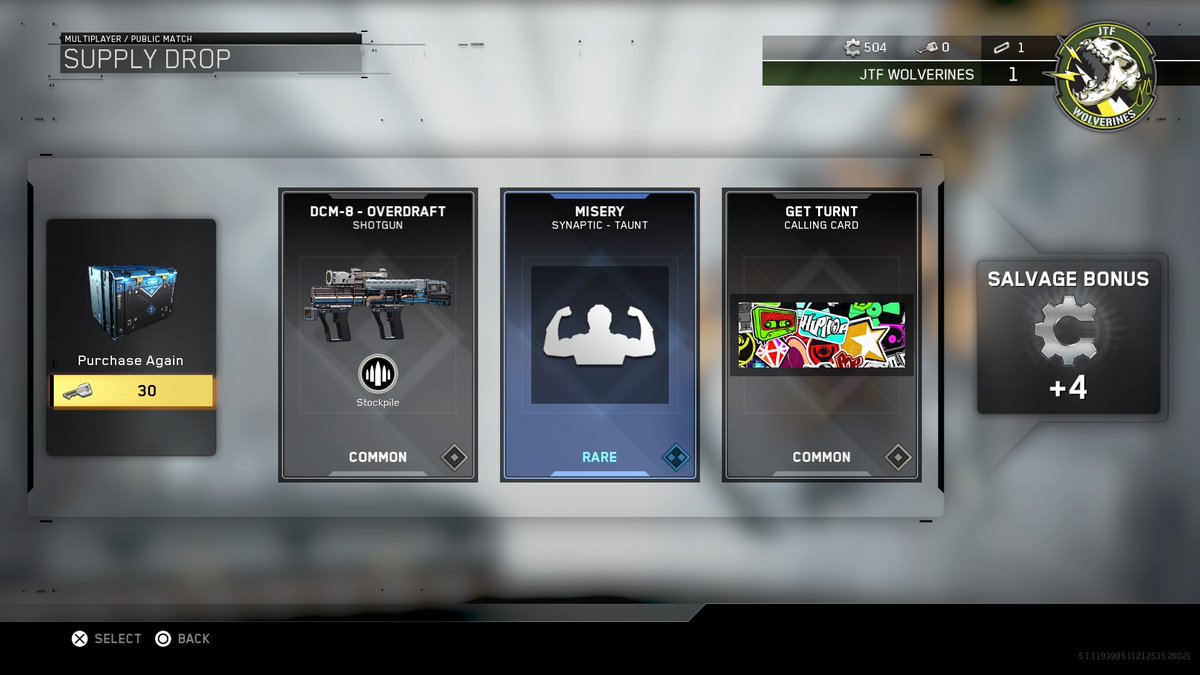 I really don't get why 'Infinite Warfare' has made its multiplayer so needlessly complicated here and why a 'Call of Duty' game needs two separate in-game currencies. It seems like a step towards microtransactions, although nothing in the beta seemed to confirm that. I just don't understand why it would be so convoluted otherwise.

I'm walking away from the 'Call of Duty: Infinite Warfare' beta with mixed feelings. The gameplay feels great, but I absolutely hate how they've designed the maps since it doesn't take advantage of how agile characters are. While multiplayer seems like a lost cause for me, I'm still hopeful that the single-player will be more up my alley. I'll find out soon enough as 'Call of Duty: Infinite Warfare' launches November 4th, 2016 on PlayStation 4, Xbox One and PC.