A Return to the Silent Assassin: 'Hitman' PS4 Impressions

Between games and movies, Agent 47 has been a on a strange trip for nearly a decade. Without belaboring the point, I've been missing a certain special magic that was present in 'Silent Assassin,' 'Contracts,' and of course, 'Blood Money.' To be sure, there have been several tastes of that feeling over the years, but with the new 'Hitman' beta, it feels like Agent 47 is back in the building.

What that means is that with a subtle, Diana-powered framework, 47 has a toolbox and a sandbox to enable me as the player, to figure out the fun ways I want to get to the target, take him out, and get out. To be clear, there are some modern trappings that elevate the proceeding above that vintage feel, and there are also various beta rough spots. But again, it's thinking about a target, about infiltration, about making "accidents" happen in a variety of ways, and getting out without breaking stride. 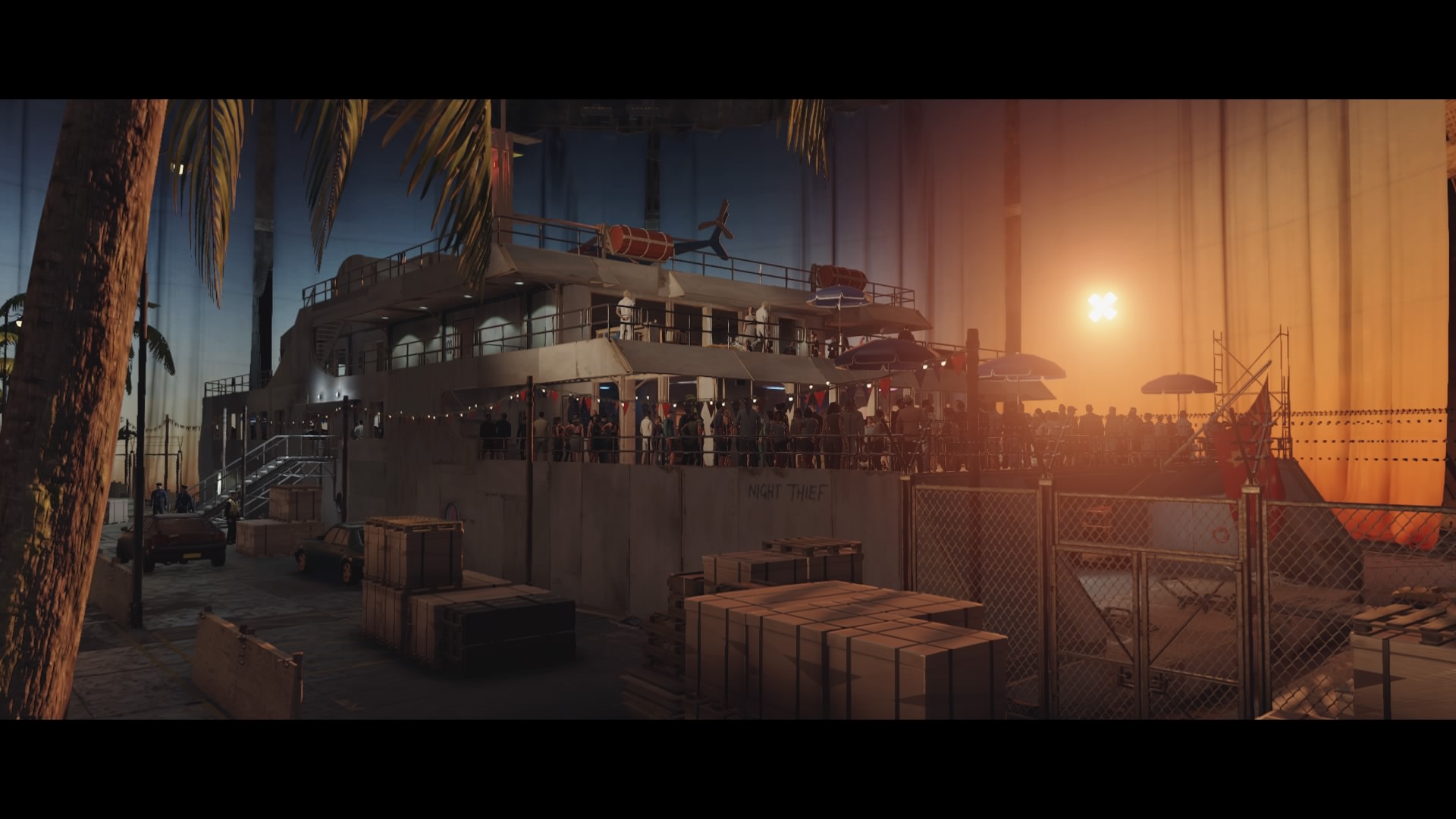 Playing the beta, which hit the PS4 today and hits the PC next week. I had access to two levels. One level is presented as a practice level that should get the player in the 'Hitman' kind of thinking, while the other is presented as the "Final Test." In spite of those descriptions, these are both fully realized levels, and the cutscenes that occur in-between are just enough narrative to not get in the way. 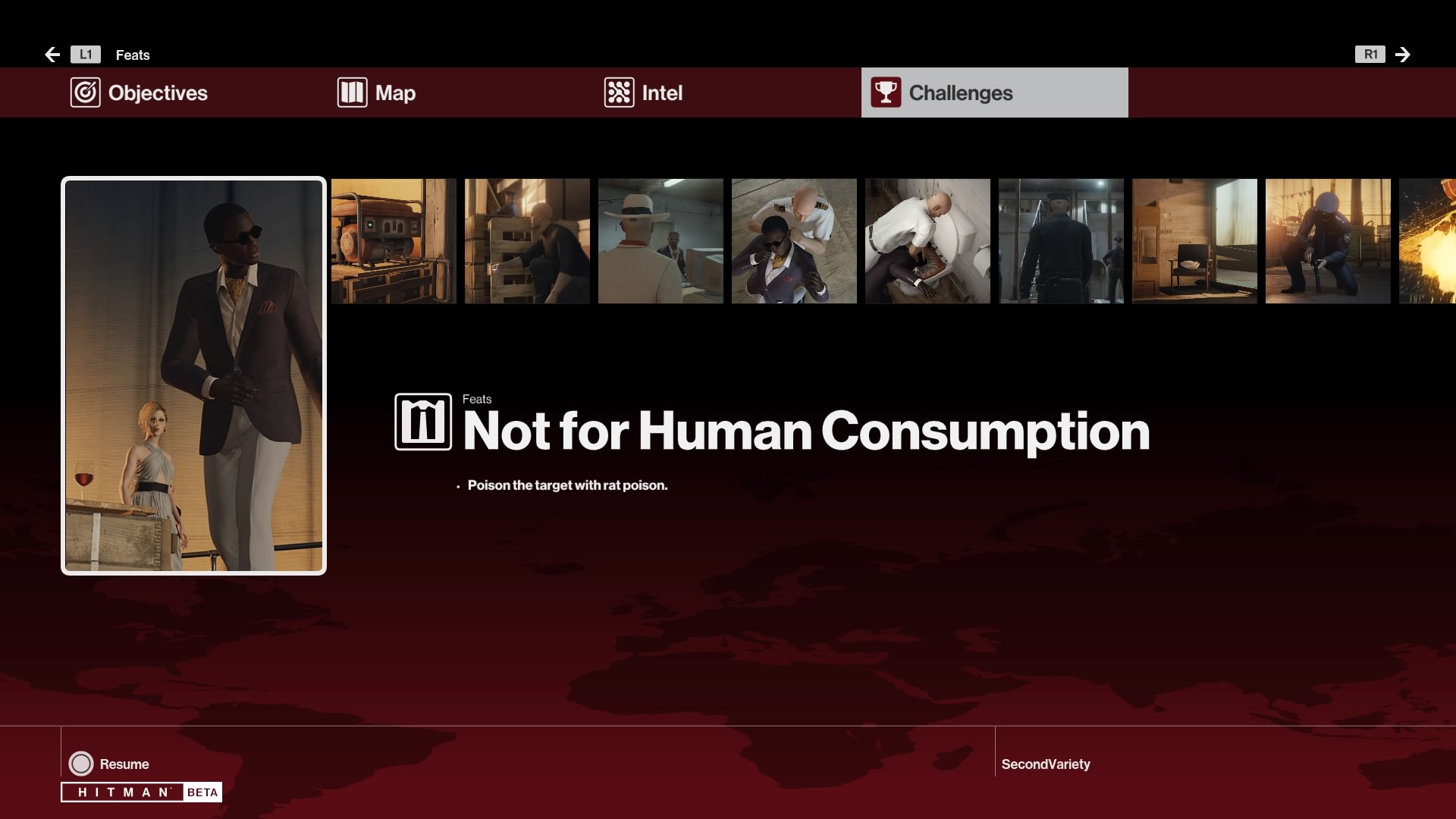 Both levels can be beaten in a quick amount of time; however, it's clear that by way of "Challenges," the game pushes players to explore different ways of completing the mission. It's a little like 'Groundhog Day.' I first eliminated that first level target, the Sparrow, using a silent Highballer. Just one shot behind closed doors. I next eliminated the Sparrow by way of a falling lifeboat and a remote explosive. I next went with rat poison in the wine. The poison caused the target to head for the restroom where I waited concealed in a closet. I then drowned him in the toilet and stashed his body in the same closet. 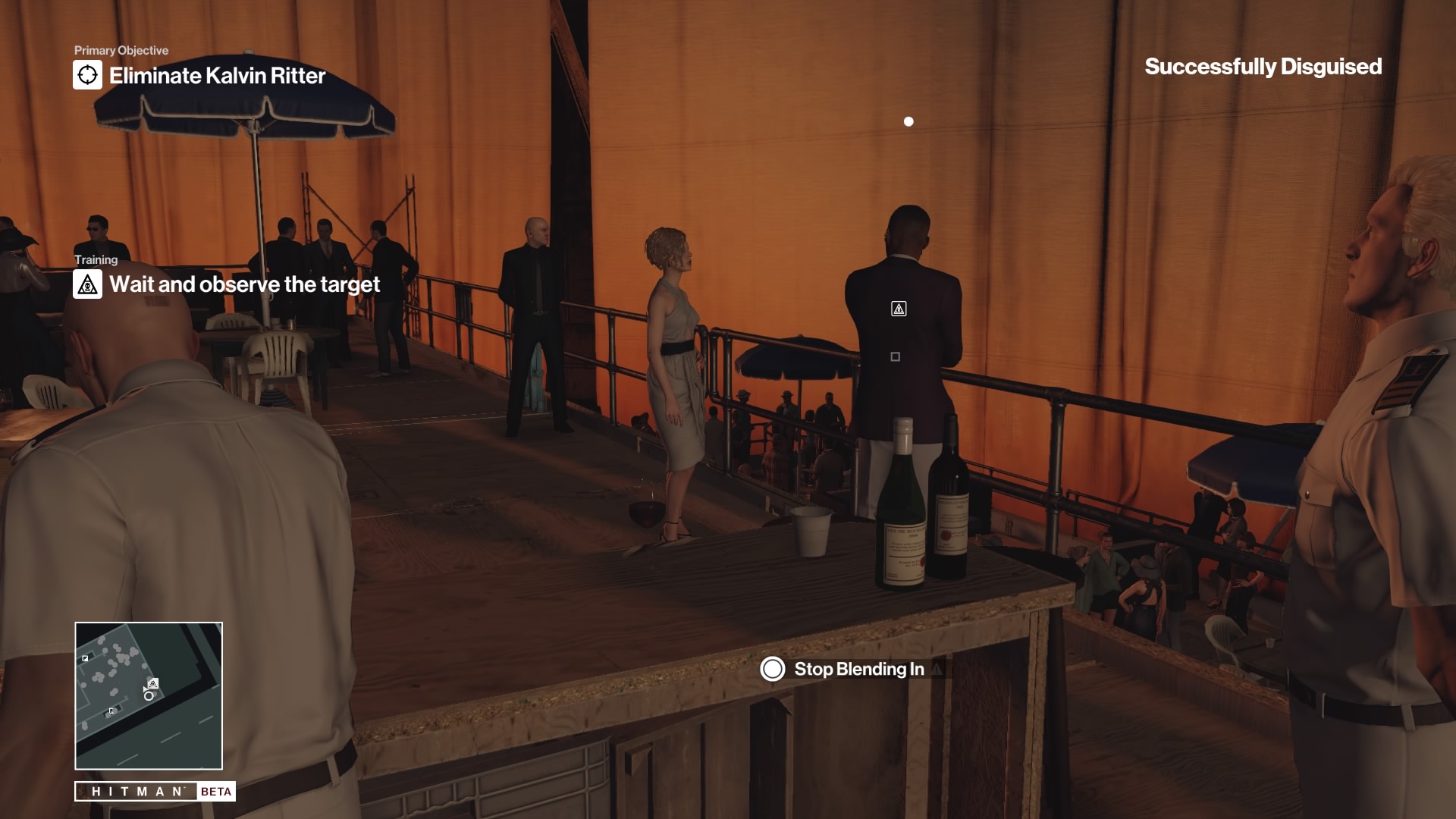 To get to the point where I could pick my methods took some doing. At the beginning, Diana was directing me to enter the yacht (or prop yacht as it were), which I ignored, choosing instead to begin trying to isolate one guard from a trio. Unarmed, I attempted to sneak around, subdue, and steal the outfit from one guard without drawing the attention of the other two, but it was no good. Later, when I had some coins (great for distracting), I was able to do this easily. In fact, using a coin, taking a guard uniform, and boarding the ship, checked off two of the challenges. I preferred instead, however, to take the mechanic route, especially as it let me easily get hold of the rat poison. 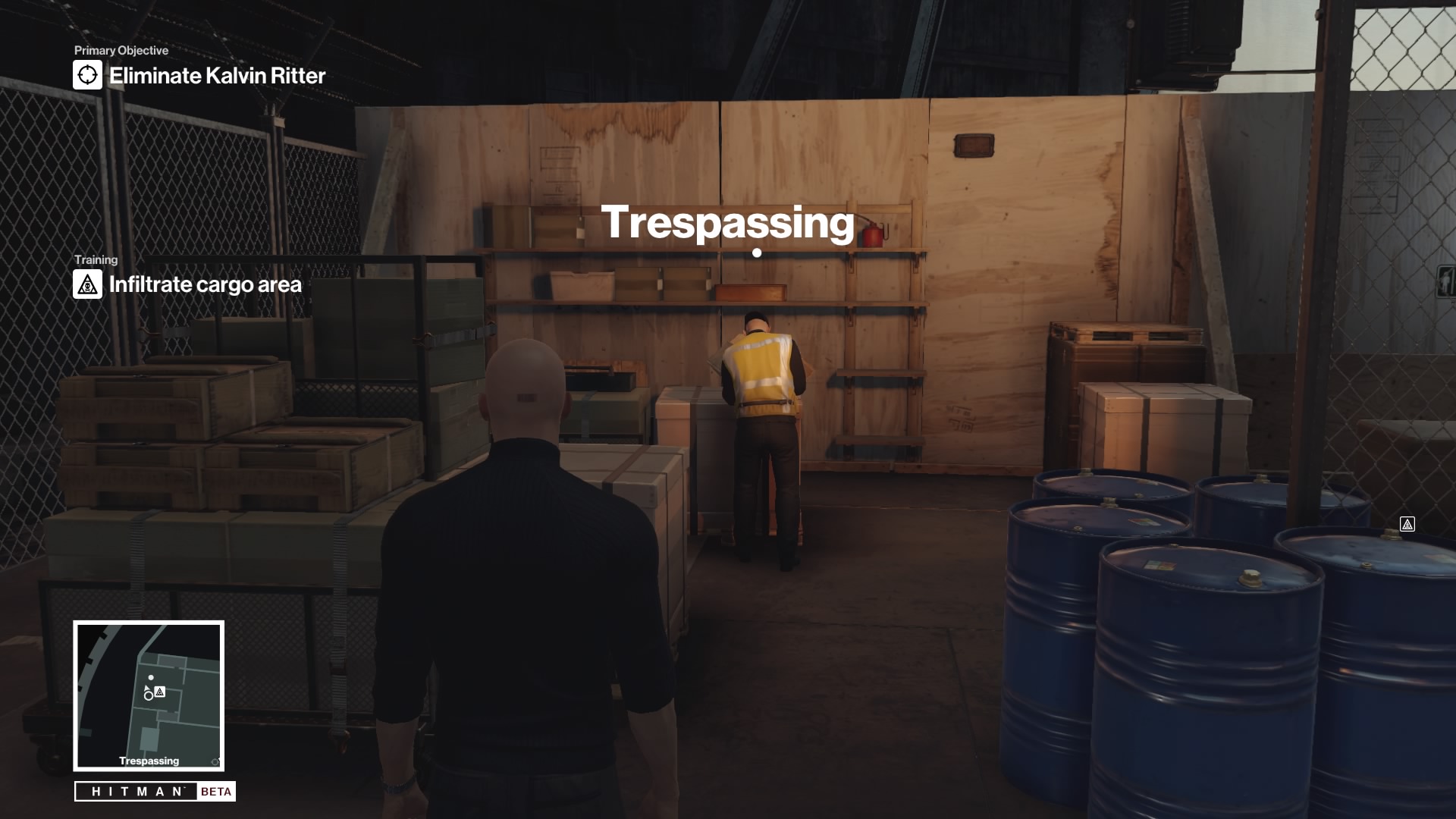 In addition to plenty of weapons and other tools, I also had Instinct and a threat/suspicion detector. Instinct, auto aim, and some other gameplay affecting options can be disabled. There's also a dual auto-save/manual save system that completely seems meant for causal use. Loading a mid-level save would reset my challenges while dying and starting over kept completed challenges checked. Overall, it feels like the game encourages casually gathering intel for a few rounds before making a run at a serious attempt. Even eavesdropping can set off new methods to follow, though I had trouble getting the game to understand which particular way I wanted to complete the mission once I picked up multiple  eavesdropping threads.

I also felt a little too comfortable using the garrote. I wonder if the the final release will make it tougher to just garrote guards and take their disguises.

There were visual beta hiccups. Nothing affected gameplay, but the in-between mission cutscenes stuttered and when I completed the final test, the servers, which presumably would have ranked my score, suffered a severe beta moment, and I had to switch to offline mode. The visuals in general didn't knock my socks off, but this is still the best a 'Silent Assassin' type 'Hitman' game has looked minus the pre-release bugs. 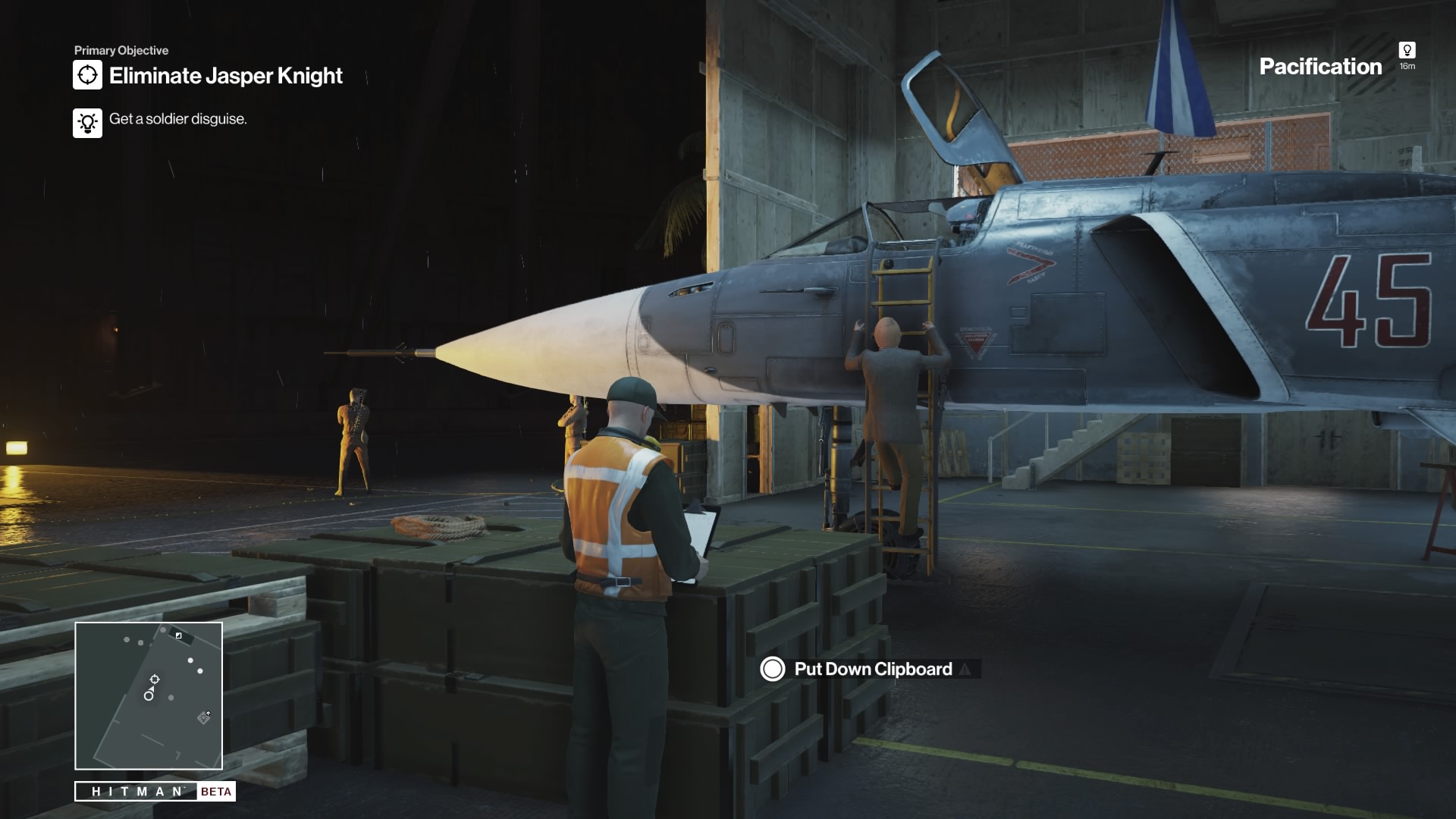 So where I've said that this nails what I've always liked about 'Hitman,' the player freedom, challenge, and dark humor, it also makes me want to play more, which was my biggest question going in. I won't spoil the fun I had in '79 era airbase level, but it was special enough to draw a favorable comparison as a modern 'Blood Money.' Frankly, I am much more interested in the game now then I was at any time in 2015. If they can clean up some of the bugs, March 11th will be a big welcome back to Agent 47.