Editor's Notes: 'Mirror’s Edge: Catalyst' impressions based off of the Xbox One beta.

Eight years ago, EA’s DICE studio produced a first-person freerunning game called 'Mirror’s Edge'. It received good reviews and good sales, but its future was in limbo until 2013 when a prequel/reboot was announced. 'Mirror’s Edge: Catalyst' uses DICE’s Frostbite engine and is in development for PC, PlayStation 4, and Xbox One.

This beta offers a small neighborhood in Glass, an open world where Faith Connors plies her trade as a revolutionary foot courier. Glass is your garden variety futuristic, dystopian city where the government has mastered the fine art of information control, and yet has trouble with routine rooftop surveillance. Faith has recently been released from two years in a juvenile detention facility, and quickly abandons any pretense of rehabilitation. She plugs into the runner network once again, conducting quick delivery jobs for scratch and sticking it to the man whenever possible.

As Faith I dashed around the rooftops of Glass, sliding under ducts, running along walls, and flagrantly hurting myself with ill-timed jumps. The core gameplay is running and jumping, and it is as smooth and seamless as 'Mirror’s Edge' ever was. Some moves and tweaks have been added in the freerunning (fewer of those vertical pipes, for instance), but it is not dramatically different from the first game, except for more speed and less downtime. A feature called shift provides modest boosts of speed and fall protection, and builds up as Faith maintains momentum. It’s not explained particularly well and probably has more uses than what is exhibited here, but it’s good for returning to speed after hard landings or changing directions without sacrificing momentum.

Red is the runners’ color and Glass is coated with it. It marks the surfaces and walls that Faith can use to traverse the rooftops, and a little red sprite serves as her GPS route from one objective to another. It’s important to note that it does not always show the best route - during timed runs, following it will only lead to success if Faith doesn’t make a single mistake. Going off the beaten path is its own fun, and many of the routes are so short that I didn’t mind exploring a bit to better my times. The area in the beta is quite small so I frequently found myself traversing the same paths often, but the level design has lots of hidden little routes and ledges. 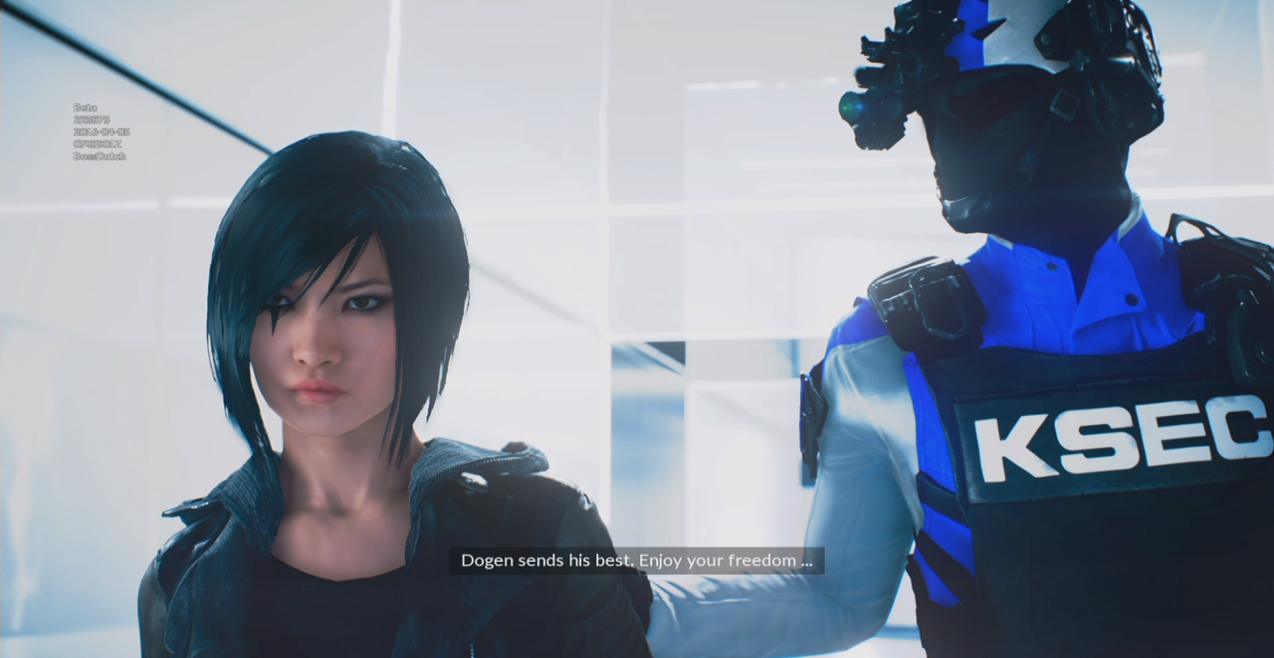 Combat has changed significantly. Faith no longer uses guns at all, and the parkour elements have been fully integrated into beating people up. Almost any move, from wallrunning to jumping to sliding, adds damage to fist attacks. Cops can be pushed into each other or thrown from rooftops. Because Faith is so fragile, her shift ability lets her dodge around combatants. The combat has been implemented so well that fighting is pretty easy, so hopefully the full game introduces different enemy types that have a chance of fighting back (perhaps some government runners?). During time trials I could hit bad guys without slowing down, and they don’t necessarily need to be knocked out, only pushed aside. 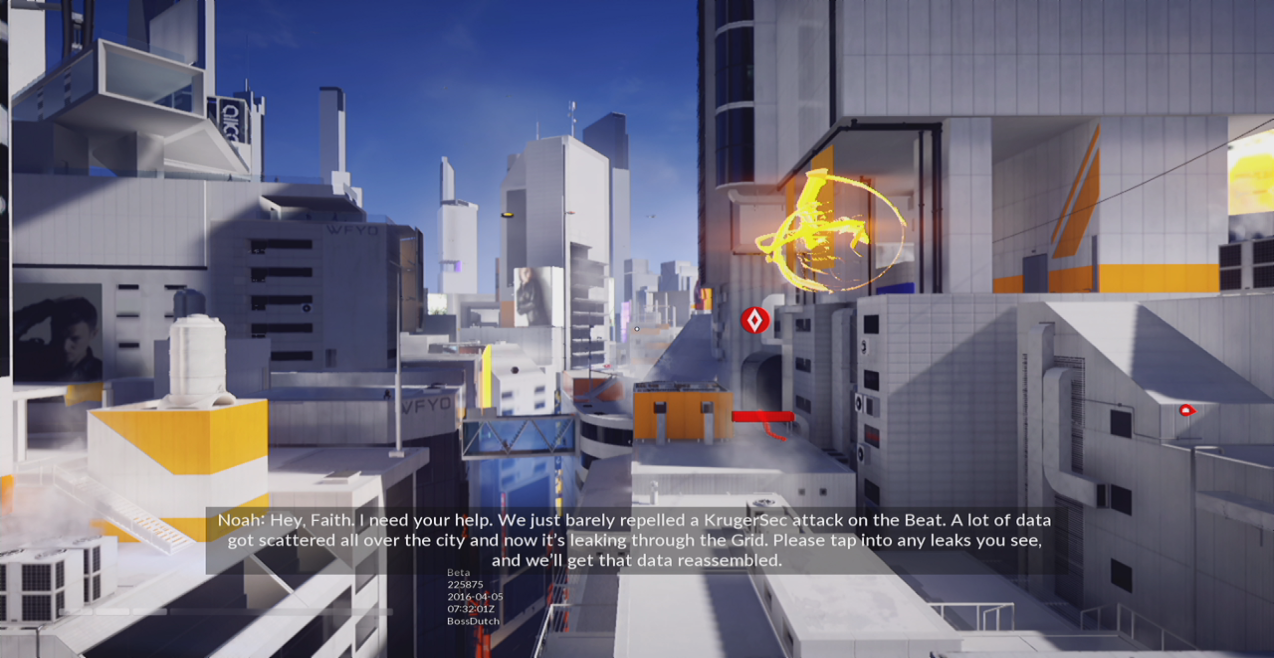 There is a bit of story tied into the beta, mostly in the form of beginner missions that slowly introduced me to the mechanics and new beat system. The beat ties together all of the collectibles, missions, and contacts into one citywide grid, connected by the little red sprite. In many games I often skip collectibles because they’re a chore and offer so little, but in 'Mirror’s Edge: Catalyst' I much enjoyed skipping about the rooftops picking up data chips and cloud information and whatever other things runners apparently need for their digital resistance. Faith is an interesting enough character, but I was more interested in exploring the open world than in watching cutscenes, and I firmly believe this is going to be one of 'Catalyst's main strengths when it releases in June.

As for the characters, it’s probably unfair to criticize them with such a short demonstration, but they mostly seem like clichés. There’s Birdman the grumpy old mentor, Noah the loving father figure, Icarus the cocky up-and-coming competitor, and so on. The narrative was one of the weaker aspects of 'Mirror’s Edge,' and I hope that DICE has something special in store for us with 'Catalyst'. There is one subplot lurking beneath the surface that has promise - after Faith is released from jail, she receives menacing messages from a crime lord to whom she owes money. Faith doesn’t seem like the kind of person who would ally herself with someone so sketchy, so perhaps it will reveal some flaws in her character or lead to some interesting revelations. 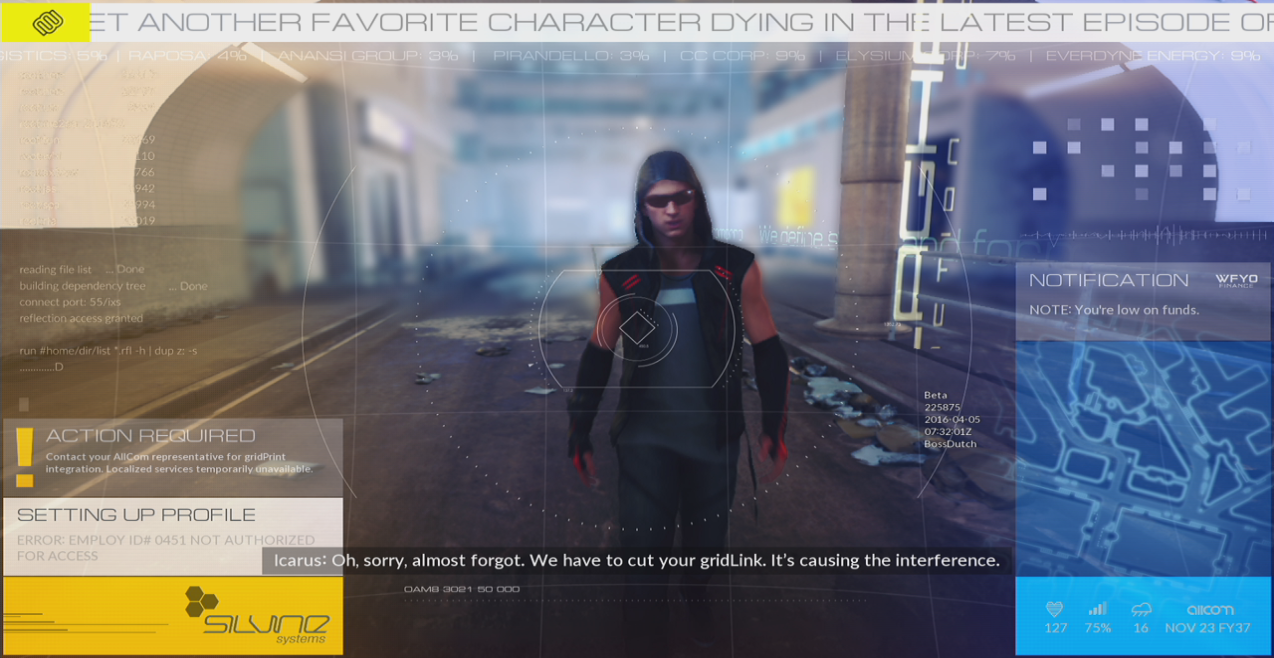 'Mirror’s Edge: Catalyst', even with this brief foray, has already demonstrated improvements over the sometimes troublesome running mechanics of the first game, not to mention a solid open world and more involved fighting system. I am hesitant about its character development, and not yet sold on the asynchronous multiplayer, but I have a feeling that I will be spending many hours in the city of Glass come June.