Praise the Sun: 'Dark Souls' For The PC Finally Having GFWL Removed, Migration Includes a Free Move to Steam for GFWL Platform Owners

Bandai Namco making good on one of the best games to date.

Along with 'Demon's Souls,' the first 'Dark Souls' is a masterwork of game design as well as template for a different outlook on how to make a game challenging. (Check out the 360 review.) The one truly important mark against the game has been certain issues with the PC version. Since launch, 'Dark Souls' on the PC has utilized Microsoft's unpopular Games For Window Live service for managing save files and achievements, but thankfully not DLC, as the PC version already includes the 'Prepare to Die' DLC.

Apart from the all-around unpleasant and troubling nature of GFWL, the fact is that Microsoft has cut back support to the extent that a rumored shutdown has lead many developers to excise it in favor of a Steam underpinning. Mercifully, Bandai Namco is making good on a recent promise to address the issue in 'Dark Souls: Prepare to Die Edition.' Starting in November, players will be able "to migrate their Dark Souls: Prepare to Die games, saves and achievements from the Games for Windows Live platform to Steam."

An important aspect of this move involves those few who may own the game for the Microsoft-run Games for Windows Live marketplace. Bandai Namco has figured out a way for those owners to migrate to a Steam version.

Here are the full notes on the move from Bandai Namco,

In the month of November, there will be a period by which Games for Windows Live Dark Souls: Prepare to Die Edition users will be able to transfer their Save Data (characters + progress) and Achievements over to their Steam accounts.

Players will still be able to use their Games for Windows Live Tokens to redeem the Steam version of Dark Souls: Prepare to Die Edition at no additional cost even after the migration period ends; but game Save Data and Achievements transfer functions may not be available.

Games for Windows Live Rankings will not be transferred to Steam.

The specific migration start and end dates will be available soon; however the migration period will begin sometime in November 2014 with more specific dates to come. 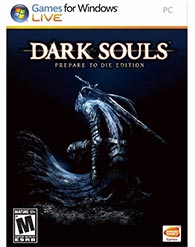