All The 'Modern' Things: The Original 'Call of Duty: Modern Warfare' Might Be Getting A Remaster

New 'Call of Duty' may include remaster.

There's reason enough to be excited about the new 'Call of Duty'; Infinity Ward's on this one, and 'Advanced Warfare' was a total blast, especially with Uncanny Valley Kevin Spacey  to yap at you between stages. There's every indication that's the road they're gonna travel down, considering this one's called 'Infinite Warfare'. But wait, there's more.

A Reddit post appears to have leaked a pre-order reservation card from Target which not only teases the game's cover and release date--November 4th, by the by--but also the fact that the Legacy Edition of the game will include a remastered version of 'Call of Duty 4: Modern Warfare'.

Naturally, this being Reddit we're talking about, doesn't necessary smack of confidence. That is, until the official 'Call of Duty' Twitter account went out of their way to find and reply to a rando's year and a half old Tweet: 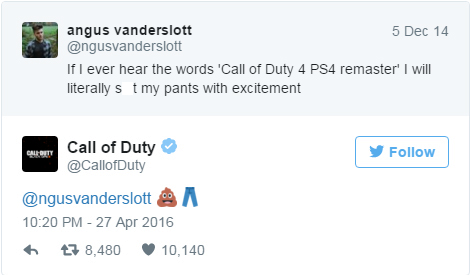 This either means there's some serious creeper with dietary issues running social media for Activision...or we're getting a 'COD 4' remaster. And hopefully it's the latter. The series took off sales-wise from there, and there are those who will play any 'COD's multiplayer no matter what, but as a total package, with a legitimately outstanding singleplayer, and wonderfully simple and fun multiplayer, they've yet to top 'Modern Warfare'. Bring it on.