'Night Ranger: 35 Years and a Night in Chicago' Blu-ray Dated

The concert disc will hit the stage on Blu-ray in December.

In an early announcement to retailers, Frontier Records is preparing 'Night Ranger: 35 Years and a Night in Chicago' for Blu-ray on December 2.

Iconic '80s rockers Night Ranger have sold 17 million units worldwide and boast several platinum and gold albums to their name. In celebration of their 35+ year career, this new live album, featuring all their classic and most recent hits, sees the band at the top of their game, delivering a superb performance not to be missed! Recorded May 7, 2016 at the the House Of Blues in Chicago, Illinois.

You can find the latest specs for 'Night Ranger: 35 Years and a Night in Chicago' linked from our Blu-ray Release Schedule, where it's indexed under December 2. 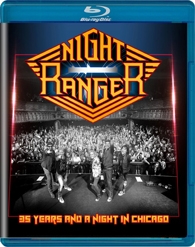 Discs mentioned in this article: (Click for specs and reviews)
Night Ranger: 35 Years and a Night in Chicago (Blu-ray)