The documentary on Hollywood's all-American boy arrives on Blu-ray in August.

In an early announcement to retailers, FilmRise will be releasing 'Tab Hunter Confidential' on Blu-ray on August 23.

Based on Tab's New York Times best-selling memoir, producer Allan Glaser and director Jeffrey Schwarz (I Am Divine) have assembled dozens of past and present Hollywood stars, and most importantly the man himself, to talk frankly about being a survivor of the Hollywood roller coaster.

Throughout the 1950s, Tab Hunter reigned as Hollywood's ultimate heartthrob. In dozens of films, and in the pages of countless magazines, Tab's astonishing looks and golden-boy sex appeal drove his fans to screaming, delirious frenzy, solidifying him the prototype for all young matinee idols to come.

Bristling against being just another pretty face and wanting to be taken seriously, Tab was one of the few to be able to transcend pin-up boy status. He earned his stripes as an actor to become a major movie star and recording artist.

But throughout his years of stardom, Tab had a secret. Tab Hunter was gay, and spent his Hollywood years in a precarious closet that repeatedly threatened to implode and destroy him. Decades later, Tab's dramatic, turbulent and ultimately inspiring life story has become an explosive documentary feature.

Tab Hunter Confidential offers unprecedented access to the man behind the marquee smile, who shares first hand what it was like to be a manufactured movie star during the Golden Age of Hollywood and the consequences of being someone totally different from his studio image. The film traces Tab's dizzying rise to Hollywood super-stardom, his secret life in an era when being openly gay was unthinkable, and his ultimate triumph when the limelight finally passed him by and true love won.

Specs have yet to be revealed, but supplements include extended interviews with Tab Hunter, Hollywood legends John Waters, George Takei, Debbie Reynolds, Robert Osborne, Robert Wagner and many others.

You can find the latest specs for 'Tab Hunter Confidential' linked from our Blu-ray Release Schedule, where it is indexed under August 23. 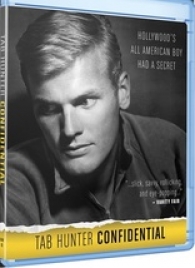