The 1989 sci-fi thriller will receive the Blu-ray treatment in September.

In an early announcement to retailers, Film Movement is working on 'Kamikaze '89' for Blu-ray on September 27.

In his last acting role, legendary director Rainer Werner Fassbinder plays Jansen, an expert cop living in a dystopic future (and clad in a sharp leopard skin jacket) where a mysterious organization known as The Combine controls all media. After The Combine's headquarters receives several bomb threats, Jansen is tasked with infiltrating the nefarious conglomerate.

You can find the latest specs for 'Kamikaze '89' linked from our Blu-ray Release Schedule, where it is indexed under September 27. 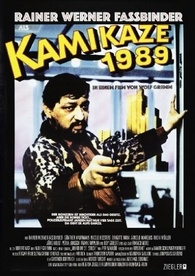