The French comedy is now available for pre-order.

In an early announcement to retailers, Film Movement is preparing 'The Tall Blond Man With One Black Shoe' for Blu-ray on July 7.

This French farce stars physical comic Pierre Richard as the naive Francois, who is mistakenly dubbed a spy as the result of interior spats in the French Secret Service. Unwittingly the target of assassins, and chief Toulouse's (Jean Rochefort) plot to trap another agent, Francois continues to muddle through his otherwise unremarkable life as it seems to fall apart before him. 'Tall Blond Man with One Black Shoe' was given a fittingly titled sequel 'Return of the Tall Blond Man with One Black Shoe(1974)' and even remade in the States as 'The Man with One Red Shoe (1985).'

You can find the latest specs for 'The Tall Blond Man With One Black Shoe' linked from our Blu-ray Release Schedule, where it's indexed under July 7. 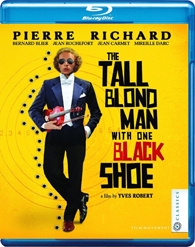 Discs mentioned in this article: (Click for specs and reviews)
The Tall Blond Man With One Black Shoe (Blu-ray)