The 1985 science fiction film will be getting the Blu-ray treatment in December.

In an early announcement to retailers, Film Movement is preparing 'The Quiet Earth' for Blu-ray on December 6.

In this sci-fi cult classic, Zac Hobson, a mid-level scientist working on a global energy project, wakes up to a nightmare. After his project malfunctions, Zac discovers that he may be the last man on Earth. As he searches empty cities for other survivors, Zac's mental state begins to deteriorate - culminating in the film's iconic and hotly debated ending.

Specs have yet to be revealed, but the release will feature a new restoration and supplements include: Audio Commentary by acclaimed astrophysicist Neil deGrasse Tyson and film critic Odie Henderson; plus a Collector's Booklet with film essay by academic/film critic Teresa Heffernan, cast and crew credits, and archival stills.

You can find the latest specs for 'The Quiet Earth' linked from our Blu-ray Release Schedule, where it is indexed under December 6. 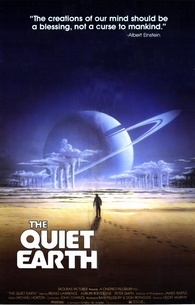