The 1989 crime thriller will gun down Blu-ray in October.

In an early announcement to retailers, Film Movement will be bringing 'Violent Cop' to Blu-ray on October 11.

Beautifully restored in HD, this classic film is now released for the first time in North America on Blu Ray. In his explosive directorial debut Japanese renaissance man-cum-comedian-extraordinaire Takeshi "Beat" Kitano plays vicious rogue homicide Detective Azuma who takes on a sadistic crime syndicate only to discover widespread internal corruption in the police force. Facing criminal charges for his unorthodox "Dirty Harry" type methods, Azuma finds himself caught in a web of betrayal and intrigue that sends him on a bloody trail of vengeance. But when his sister is kidnapped by a sadistic drug lord, Azuma's tactics escalate towards an apocalyptic climax.

You can find the latest specs for 'Violent Cop' linked from our Blu-ray Release Schedule, where it is indexed under October 11. 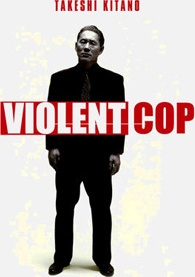