The 1976 Italian comedy arrives on Blu-ray in a few weeks.

In an early announcement to retailers, Film Movement has revealed 'Ugly, Dirty & Bad' will hit Blu-ray on November 1.

Acclaimed Italian auteur Ettore Scola pairs up with legendary actor Nino Manfredi in this irreverent Cannes-winning grotesque comedy. Giacinto (Manfredi), along with four generations of his sprawling, crooked clan, lives in a cramped, dilapidated home on the outskirts of Rome. When a work accident leaves him blind in one eye, the derelict suddenly finds himself rolling in insurance money. Refusing to share the wealth, Giacinto's relatives concoct several harebrained plots in hopes of wrenching the riches away.

You can find the latest specs for 'Ugly, Dirty & Bad' linked from our Blu-ray Release Schedule, where it is indexed under November 1. 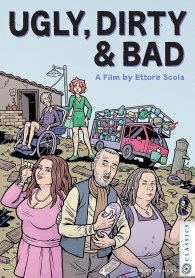