Two dramas from the French director will arrive on Blu-ray in October.

In an early announcement to retailers, Film Movement is preparing 'The Marquise of O' & 'Full Moon in Paris' for Blu-ray on October 6.

'The Marquise of O' - Winner of the Special Jury Prize at the Cannes Film Festival in 1976 and directed by Eric Rohmer, the film is set in 1799 during the Russian invasion of Italy. A young widow, The Marquise (Edith Clever) lives with her parents in the fort her father commands. In the midst of battle, the Marquise is abducted by a group of rowdy soldiers and nearly taken advantage of when the Russian commander Count F (Bruno Ganz) rescues her. Later, the Marquise realizes she is pregnant, though she cannot decipher how the circumstance came to be. The Marquise pens a letter to the newspaper announcing that she will marry the father, whomever he may be, should he only present himself.

'Full Moon in Paris' - Louise (Pascale Ogier) is a young interior designer bored with her life in the sleepy suburbs with her live-in boyfriend. So she moves back into her Paris apartment during the week, balancing the boyfriend, a best friend and a bad boy musician who catches her eye at a party. Eventually even the sophisticated and aloof Louise cannot untangle herself from the emotional realities of her various romantic encounters. Decades after first impressing critics and audiences alike, 'Full Moon in Paris' remains a modern, wry observation of youth and love.

You can find the latest specs for 'The Marquise of O' & 'Full Moon in Paris' linked from our Blu-ray Release Schedule, where they are indexed under October 6. 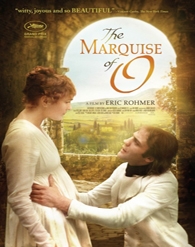 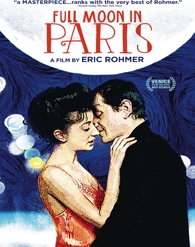 Discs mentioned in this article: (Click for specs and reviews)
The Marquise of O (Blu-ray)
Full Moon in Paris (Blu-ray)