The Academy Award-winning film arrives on Blu-ray in April.

In an early announcement to retailers, Film Movement Classics is set to release 'Antonia’s Line' on Blu-ray on April 19.

“Written and directed with quirky charm by Marleen Gorris,” observed Janet Maslin of the New York Times when the film was released in February 1996, 'Antonia’s Line' played in international and in women’s film festivals where it garnered recognition, including awards from the Chicago and Toronto Film Festivals. Gorris, who also directed MRS. DALLOWAY, is one of a few women to be recognized for Directing by the Academy Awards, where it won the Best Foreign Film statue twenty years ago.

In the aftermath of WWII, strong-willed Antonia (the incomparable Willeke van Almelrooy, returns to her small hometown where she has inherited her mother’s farm. Joined by her free-spirited artist daughter Danielle (Els Dottermans), the pair ingratiate themselves with the town’s tight-knit and eccentric community. As the years unfold, love and tragedy come to Antonia and Danielle, while they foster five generations of family and create a vibrant circle of strong, liberated women.

Specs haven't been revealed yet, but the Blu-ray will include a new restoration of the film as well as an archival video interview with director Marleen Gorris and a new essay by author, film critic and Oscar specialist Thelma Adams.

You can find the latest specs for 'Antonia’s Line' linked from our Blu-ray Release Schedule, where it is indexed under April 19. 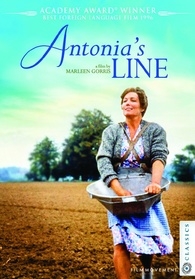