The Dennis Hopper Documentary 'The American Dreamer' Announced for Blu-ray

The 1971 film directed by L.M. Kit Carson heads to Blu-ray in September.

In an early announcement to retailers, Etiquette Pictures will be releasing 'The American Dreamer' on Blu-ray on September 22.

The wild, unexpected success of Easy Rider ushered in what is now seen as one of the most significant turning points in film history, making pathologically rebellious Dennis Hopper an unlikely King Of Hollywood for a day. Hopper's follow-up work, The Last Movie, a deeply personal, but ultimately disastrous, meditation on the meaning of cinema, found Hopper drifting further and further into foolishness. Captured by co-directors Lawrence Schiller and L.M. Kit Carson, The American Dreamer is a multi-faceted document of the life and mind of one of the 20th century's great cinematic voices at the peak of his artistic and commercial success. Shifting between being an insightful document of a complex artist in the midst of his creative process and a self-reflective exploration and explosion of vérité filmmaking tropes, The American Dreamer is a mesmerizing journey into the private world of one of Hollywood's most hypnotic directors/stars. Fortuitously timed, fantastically made, and virtually unseen, The American Dreamer is the great 70s film documentary you always wished existed.

Etiquette Pictures, in partnership with the Walker Art Center in Minneapolis, brings this forgotten masterpiece to home video for the very first time in a new, Director approved 2k restoration, painstakingly reconstructed from four 16mm prints housed in the Walker Art Center s Ruben/Bentson Moving Image Collection. Major support to preserve, digitize, and present this film and the entire Ruben/Bentson Moving Image Collection is generously provided by the Bentson Foundation.

The combo pack will include: Fighting Against the Wind making-of featurette, A Long Way Home preservation featurette, Extensive photo gallery, Booklet and essay by film historian and Temple of Schlock blogger Chris Poggiali, and Reversible cover.

You can find the latest specs for 'The American Dreamer' linked from our Blu-ray Release Schedule, where it is indexed under September 22. 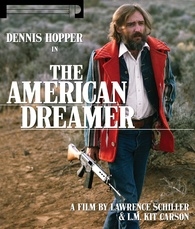