The band will hit the stage on Blu-ray in September.

In an early announcement to retailers, earMUSIC is preparing 'Deep Purple: From the Setting Sun in Wacken - 3D' and 'Deep Purple: To the Rising Sun in Tokyo' for Blu-ray on September 18.

'Deep Purple: From the Setting Sun in Wacken - 3D' - Wacken Open Air quickly grew its reputation as the most important metal festival in continental Europe. A peaceful gathering of metal fans coming from all over the world. Long hair, leather clothes, mud and a lot of fun for what seems to be the closest music to resemble the spirit of festivals in the early seventies. They often say that there is no headliner at Wacken: the festival itself is the headliner. This is the exact feeling that Purple had when walking onstage. If an indoor show can be based on a production that is safely rehearsed and set up to the maximum precision... there is never the guarantee that a festival performance will be free from technical issues or any kind of unexpected event. Which in other words means: tension is always at the top! If only Purple knew about the level of love and welcoming they were about to receive and how much their album has been loved by the metal audi ence in front of them... still, the band felt the pressure to introduce themselves to the 90,000 metal fans at Wacken.

For the first time in many years, Deep Purple felt they had to conquer an audience as it happened to them in the beginning of their career. The result is a unique concert: Deep Purple performing with a raw energy, throwing away all their usual stage routine (and sometime arrangements). The show is a blast from the first note to the last and grows song after song, supported by the audience impressive presence. During this concert, Deep Purple left their safe zone . That is why this concert is the one that represents a feeling of improvisation and electricity similar to the band's classic years more than many other live releases by the band.

The show has been filmed by 9 HD cameras and it is also available in 3D on the Blu ray version (the first time for Deep Purple). The audio has been mixed in Hamburg, Germany by Eike Freese and Alex Dietz (Heaven Shall Burn) with the supervision of Roger Glover. 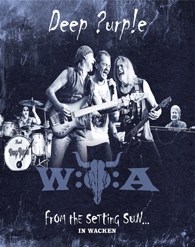 'Deep Purple: To the Rising Sun in Tokyo' - If Wacken shows Deep Purple's performance in front of a huge rock audience, playing as if they had to leave all their habits behind, the Tokyo show is presenting Deep Purple completely at ease with their history and themselves. On the very same venue where the band has written rock history with the album Made In Japan , Deep Purple went on stage without nostalgia and with the attitude of a band that is physically led by the music, making playing a perfect show look as the most natural thing one could do. Song after song, Purple play a flawless show going back and forth in time. Deep Purple's many sides are at their best here: the energy but also the groove, the great solo moments by Don Airey and Steve Morse. The soft sides and their energetic heavy counterparts.

Filmed by 12 HD cameras and recorded by a top mobile studio, the show offers one of the most magical performances of the NOW What?! tour. Every member of the band is in fantastic form, the band being strong from a full tour together, and the performance seems to be driving the band through the song like if audience and band were suspended in time. 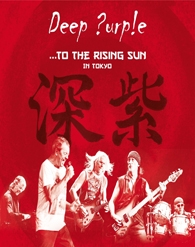 You can find the latest specs for both discs linked from our Blu-ray Release Schedule, where they are indexed under September 18.