While DTS only recently jumped into the object-based sound mixing fray with DTS:X, we've been enjoying the company's DTS Headphone:X format since the launch of the Hans Zimmer's 'Man of Steel' original motion picture soundtrack.

If you're not familiar with Headphone:X, it is a specially encoded two-channel mix that, when heard through any pair of standard headphones, synthesizes a full 11.1 channel surround sound experience for listeners.

Don't believe me? Click over to the DTS Headphone:X page with a pair of your favorite headphones on and watch the third video, which calls out the 11 channel speaker locations. There are also a couple music videos.

The problem I've had with DTS Headphone:X thus far is a lack of content. The 'Man of Steel' score sounded spectacular, but the Z App on which it plays is extremely buggy, so I haven't been listening to it very much. Plus, I would also argue that the full sensation of surround sound is better suited to motion picture and television content that feature active surround-panning rather than a movie score's orchestrations.

DTS is now including a Headphone:X track on Blu-ray releases featuring DTS-HD Master Audio and DTS:X. Think of this option as an added benefit for someone who needs to watch a movie quietly, but doesn't want to miss out on the full surround experience. The only downside to this, however, is that you're tethered to your AV Receiver. In my humble opinion, DTS Headphone:X would be perfect for Digital Downloads and streaming, and will hopefully become an audio option in these markets. 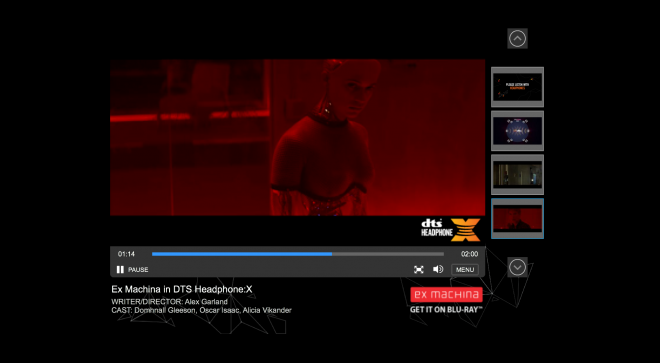 If you own a copy of 'Ex Machina', 'The Hunger Games: Mockingjay Part 1' or the latest 'Terminator 2' Blu-ray release, you already have access to DTS Headphone:X tracks. For the rest of you, DTS and Lionsgate have provided two DTS Headphone:X clips on the 'Ex Machina' website (click HERE to access -- sorry I can't embed it). Pay special attention to Ava's internal motors in clip one, as well as the automated warning voice as the power kicks out in clip two.

Also of note. I should be getting my hands on a new AV Receiver capable of decoding DTS:X in the near future. My plan is to compare the 'Ex Machina' DTS:X and DTS Headphone:X tracks (to see how well Headphone:X compares to the real thing), which should be fun to explore as well.

What do you think about Headphone:X, and where would you like to use it more?

Let us know in the comments below or in the forums.