The opera star will hit the stage on Blu-ray in August. Pre-orders are now live.

In an early announcement to retailers, Decca is preparing 'Jonas Kaufmann' for Blu-ray on August 28.

Jonas Kaufmann is one of the undoubted opera superstars of today, and his electric stage presence is perfectly captured in these DVD/Blu-ray sets. Kaufmann is renowned for his versatility, and this varied selection of four Opera productions showcases his vocal flexibility in style, genres and languages.

You can find the latest specs for 'Jonas Kaufmann' linked from our Blu-ray Release Schedule, where it's indexed under August 28. 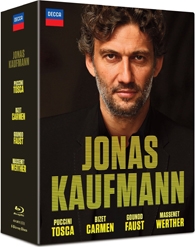 Discs mentioned in this article: (Click for specs and reviews)
Jonas Kaufmann (Blu-ray)