The independent horror flick will hit Blu-ray at the end of May.

In an early announcement to retailers, Dark Sky Films will be releasing 'Let Us Prey' on Blu-ray on May 26.

Rachel (Pollyanna McIntosh), a rookie cop, is about to begin her first nightshift in a neglected police station in a backwater town. Surrounded by both disgruntled officers and irate petty offenders, her job becomes all the more difficult and terrifying when a mysterious man (Liam Cunningham) is brought in and strange things start happening to everyone in the station. As it becomes clear that the enigmatic stranger has something to do with the supernatural events, Rachel finds herself in a fight for her life against cop and criminal alike as one by one they turn on each other and themselves. Now she must survive the night and uncover the stranger s true plans for the station s hapless denizens before she too falls prey to the unholy power that seeks to destroy them all.

You can find the latest specs for 'Let Us Prey' linked from our Blu-ray Release Schedule, where it is indexed under May 26. 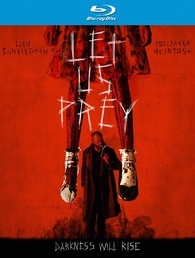