First with the 4K UHD news, we have Darius Marder's Sound of Metal  which also will be getting a Blu-ray release on September 27. 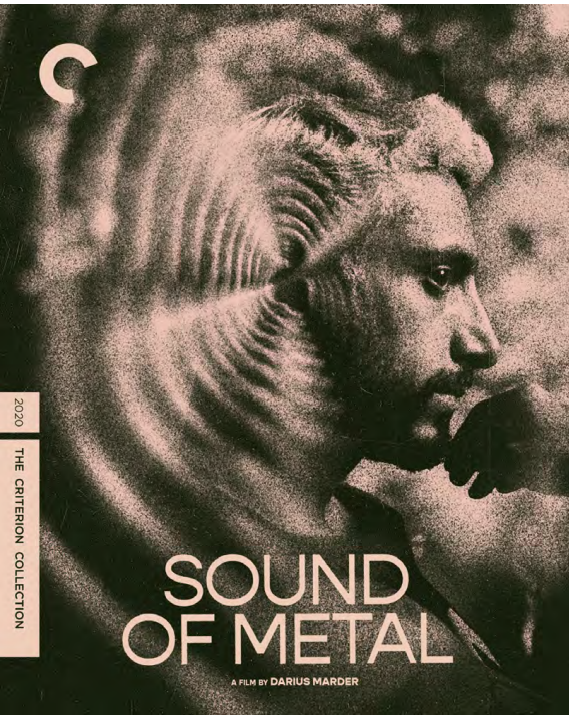 In Sound of Metal, a tale of sound, fury, and self-discovery, Riz Ahmed delivers an intensely committed performance as the volatile Ruben, who has found new purpose as a drummer in a noise-metal duo, playing blistering live shows with his singer girlfriend, Lou (Olivia Cooke). When Ruben suddenly loses much of his hearing, he is launched on a profound odyssey—through denial, anger, grief, and, gradually, acceptance—as he comes to understand what it means to live as a deaf person and to discover deafness as not a disability but a rich culture and community. Through stunningly immersive, Academy Award–winning sound design, director Darius Marder invites us to experience the world as Ruben does, capturing a sonic spectrum in which silence comes in a thousand shades.

• For the 4K UHD edition: One 4K UHD disc of the film presented in Dolby Vision HDR and one Blu-ray with the film and special features

• New conversation between Marder and filmmaker Derek Cianfrance, who share a story credit on the film

• PLUS: An essay by critic Roxana Hadadi

Brian De Palma's Blow Out starring John Travolta and Olivia Cooke will also be getting the 4K treatment on September 13. 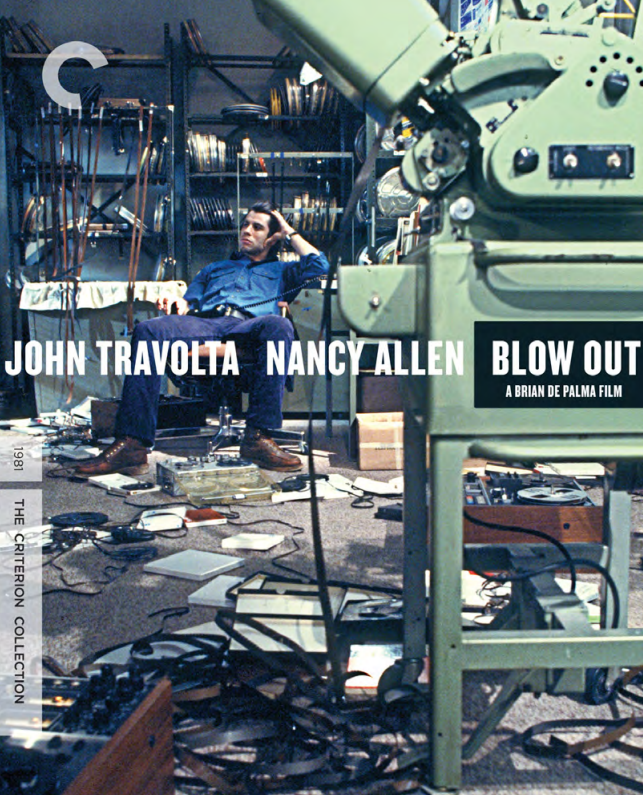 In the enthralling Blow Out, brilliantly crafted by Brian De Palma, John Travolta gives one of his greatest performances, as a film sound-effects man who believes he has accidentally recorded a political assassination. To uncover the truth, he enlists the help of a possible eyewitness to the crime (Nancy Allen), who may be in danger herself. With its jolting stylistic flourishes, intricate plot, profoundly felt characterizations, and gritty evocation of early-1980s Philadelphia, Blow Out is an American paranoia thriller unlike any other, as well as a devilish reflection on moviemaking.

• PLUS: An essay by critic Michael Sragow and Pauline Kael’s original New Yorker review of the film

Available on September 13th comes Take Out  from Sean Baker and Shih-Ching Tsou on Blu-ray. 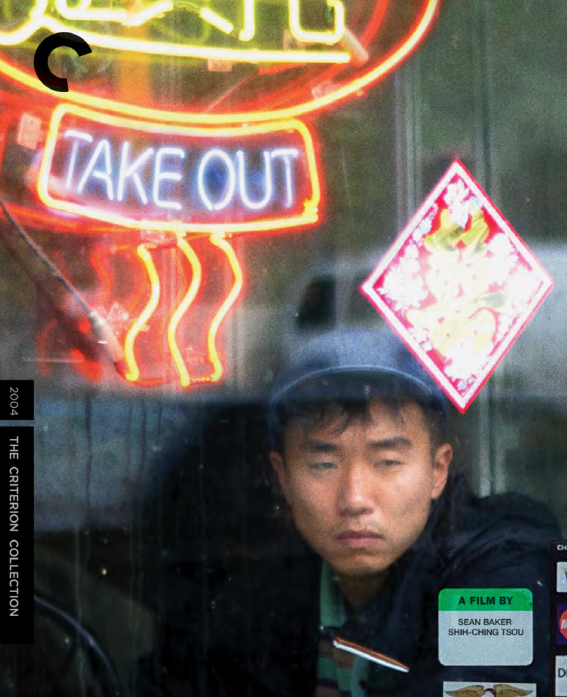 The American dream has rarely seemed so far away as in the raw, vérité Take Out, by Sean Baker and Shih-Ching Tsou, an immersion in the life of an undocumented Chinese immigrant struggling to get by on the margins of post-9/11 New York City. Facing violent retaliation from a loan shark, restaurant deliveryman Ming Ding (Charles Jang) has until nightfall to pay back the money he owes, and he encounters both crushing setbacks and moments of unexpected humanity as he races against time to earn enough in tips over the course of a frantic day. From this simple setup, Baker and Tsou fashion a kind of neorealist survival thriller of the everyday, shedding compassionate light on the too often overlooked lives and labor that keep New York running.

• Program about the making of the film

• PLUS: An essay by filmmaker and author J. J. Murphy

On the 20th, Henri-Georges Clouzot's controversial Le Corbeau will be available in stores. 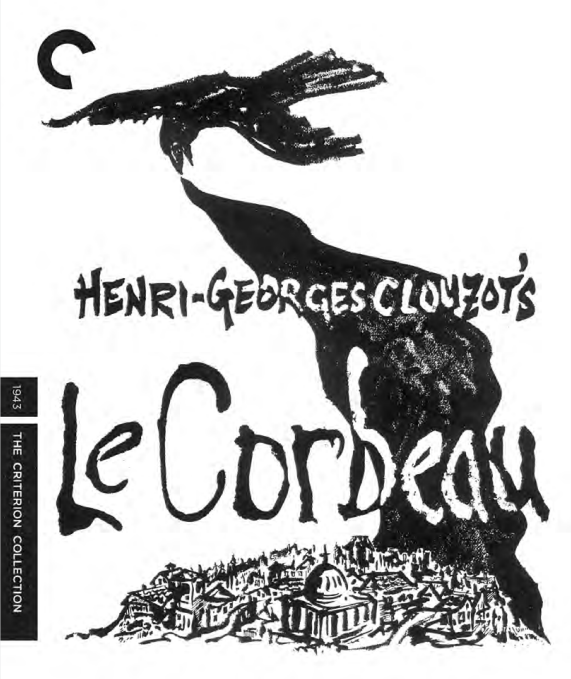 A mysterious writer of poison-pen letters, known only as Le Corbeau (the Raven), plagues a provincial French town, exposing the collective suspicion and rancor seething beneath the community’s calm surface. Made during the Nazi occupation of France, this film by Henri-Georges Clouzot was attacked by the right-wing Vichy regime, the left-wing Resistance press, and the Catholic Church, and was banned after the country’s liberation. But some—including Jean Cocteau and Jean-Paul Sartre—recognized the powerful subtext to Clouzot’s anti-informant, anti-Gestapo fable and worked to rehabilitate his directorial reputation after the war. Le Corbeau brilliantly captures the spirit of paranoid pettiness and self-loathing that turns an occupied French town into a twentieth-century Salem.

• Excerpts from The Story of French Cinema by Those Who Made It: Grand Illusions 1939–1942, a 1975 documentary featuring director Henri-Georges Clouzot

• PLUS: An essay by film scholar Alan Williams 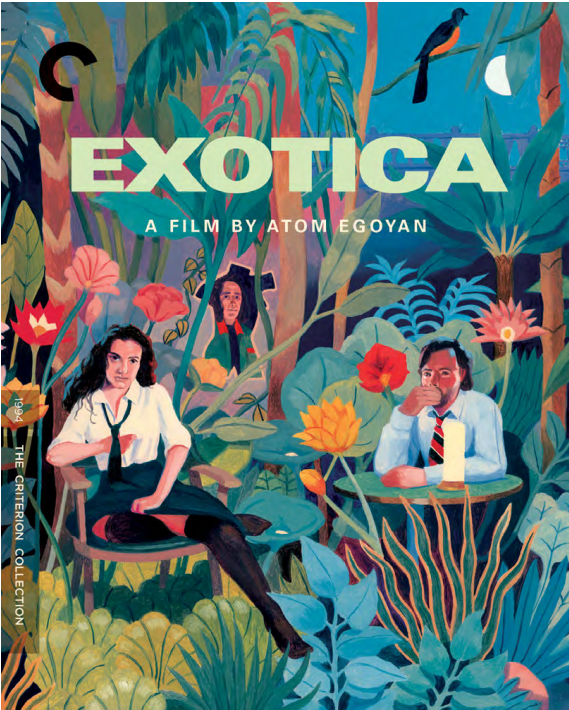 One of the defining independent films of the 1990s, Atom Egoyan’s mesmerizing international breakthrough Exotica takes the conventions of the psychological thriller into bold new territory—unsettling, dreamlike, and empathetic. At the neon-drenched Toronto strip club of the film’s title, a coterie of lost and damaged souls—including a man haunted by grief (Bruce Greenwood), a young woman with whom he shares an enigmatic bond (Mia Kirshner), an obsessive emcee (Elias Koteas), and a smuggler of rare bird eggs (Don McKellar)—search for redemption as they work through the traumas of their mysteriously interconnected histories in an obsessive cycle of sex, pain, jealousy, and catharsis. Masterfully weaving together past and present, Egoyan constructs a spellbinding narrative puzzle, the full emotional impact of which doesn’t hit until the last piece is in place..

• New conversation between Egoyan and filmmaker and actor Sarah Polley

• Calendar, a 1993 feature film by Egoyan, with a new introduction

Artaud Double Bill, a 2007 short film by Egoyan, commissioned for the sixtieth anniversary of the Cannes Film Festival

• PLUS: An essay by author and filmmaker Jason Wood

And finally available on the 27th is Martin Scorsese’s World Cinema Project No. 4  featuring several films in a Blu-ray boxed set. 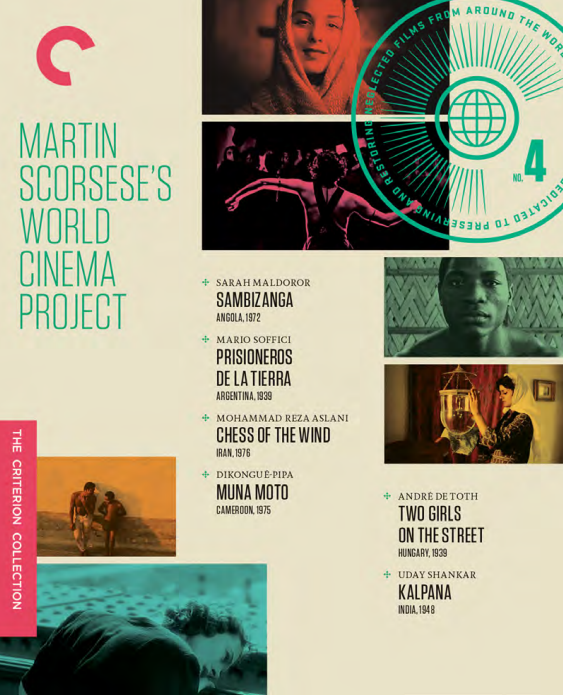 Established by Martin Scorsese in 2007, The Film Foundation’s World Cinema Project has maintained a fierce commitment to preserving and presenting masterpieces from around the globe, with a growing roster of dozens of restorations that have introduced moviegoers to often overlooked areas of cinema history. This collector’s set gathers six important works, from Angola (Sambizanga), Argentina (Prisioneros de la tierra), Iran (Chess of the Wind), Cameroon (Muna moto), Hungary (Two Girls on the Street), and India (Kalpana). Each title is an essential contribution to the art form and a window onto a filmmaking tradition that international audiences previously had limited opportunities to experience.

• The Majnoun and the Wind (2022), a documentary by Gita Aslani Shahrestani, daughter of Chess of the Wind director Mohammad Reza Aslani, featuring Aslani, members of the film’s cast and crew, and others

• PLUS: A foreword and essays on the films by critics and scholars Yasmina Price, Matthew Karush, Ehsan Khoshbakht, Aboubakar Sanogo, Chris Fujiwara, and Shai Heredia

A bombshell by the first woman to direct a film in Africa, Sarah Maldoror’s chronicle of the awakening of Angola’s independence movement is a stirring hymn to those who risk everything in the fight for freedom. Based on a true story, Sambizanga follows a young woman (Elisa Andrade) as she makes her way from the outskirts of Luanda toward the city’s center looking for her husband (Domingos Oliveira) after his arrest by the Portuguese authorities—an incident that ultimately helps to ignite an uprising. Scored by the language of revolution and the spiritual songs of the colonized Angolan people, and featuring a cast of nonprofessional actors—many of whom were themselves involved in anticolonial resistance—this landmark work of political cinema honors the essential roles of women, as well as the hardships they endure, in the global struggle for liberation.

The most acclaimed film by one of classic Argentine cinema’s foremost directors, Mario Soffici’s gut-punching work of social realism, shot on location in the dense, sweltering jungle of the Misiones region, simmers with rage against the oppression of workers. A group of desperate men are conscripted into indentured labor on a treacherous, disease-ridden yerba maté plantation under the control of the brutal foreman Köhner (Francisco Petrone)—a situation that boils over in an explosive act of rebellion led by the defiant Podeley (Ángel Magaña), and made all the more tense by the fact that Köhner and Podeley love the same woman: Andrea (Elisa Galvé), the sweet-spirited daughter of the camp’s doctor. The expressionistic, shadow-sculpted cinematography of Pablo Tabernero evokes the feverish dread of a place where suffocating heat, economic exploitation, and unremitting cruelty lead inexorably to madness and violence.

CHESS OF THE WIND

Lost for decades after screening at the 1976 Tehran International Film Festival, this rediscovered jewel of Iranian cinema reemerges to take its place as one of the most singular and astonishing works of the country’s prerevolutionary New Wave. A hypnotically stylized murder mystery awash in shivery period atmosphere, Chess of the Wind unfolds inside an ornate, candlelit mansion where a web of greed, violence, and betrayal ensnares the potential heirs to a family fortune as they vie for control of their recently deceased matriarch’s estate. Melding the influences of European modernism, gothic horror, and classical Persian art, director Mohammad Reza Aslani crafts an exquisitely restrained mood piece that erupts into a subversive final act in which class conventions, gender roles, and even time itself are upended with shocking ferocity.

Director Dikongué-Pipa forged a new African cinematic language with Muna moto, a delicate love story with profound emotional resonance. In a close-knit village in Cameroon, the rigid customs governing courtship and marriage mean that a deeply in love betrothed couple (David Endéné and Arlette Din Belle) can be torn apart by the lack of a dowry and by another man’s claiming of the young woman as his own wife—a rupture that sets the stage for a clash between a patriarchal society and a modern generation’s determination to chart its own course. Luminous black-and-white cinematography and stylistic flourishes yield images of haunting power in this potent depiction, told via flashback, of the challenges of postcolonialism and the devastating consequences of a community’s refusal to deviate from tradition.

TWO GIRLS ON THE STREET

The maverick Hollywood stylist André de Toth sharpened his craft in his native Hungary, where he directed five films, including this chic, dynamically paced melodrama studded with deco decor and jazzy musical interludes. Mária Tasnádi Fekete and Bella Bordy sparkle as upwardly mobile working women—one a musician in an all-girl band, the other a bricklayer—who join forces as they both try to make it in Budapest, supporting each other through changing economic fortunes, the advances of lecherous men, and the highs and heartbreaks of love. Kinetic camera work, brisk editing, and avant-garde imagery abound in Two Girls on the Street, an often strikingly modern ode to the power of working-class female solidarity.

A riot of ecstatic imagery, performance, and set design, the only film by the visionary dancer and choreographer Uday Shankar is a revolutionary celebration of Indian dance in its myriad varieties and a utopian vision of cultural renewal. Unfolding as an epic film within a film, Kalpana tells the story of an ambitious dancer (Shankar) determined to open a cultural center devoted to breathing new life into India’s traditional artistic forms; meanwhile, the obvious adoration between him and his lead dancer (Shankar’s wife and collaborator, Amala Uday Shankar) arouses the jealousy of his enterprising companion (Lakshmi Kanta). Swirling surrealist dance spectacles—featuring dance masters and young performers, many of whom would become stars in their own right—are interwoven with anticolonial, anticapitalist commentary for a radical, proto-Bollywood milestone that is one of the most influential works in Indian cinema.

That's all the information that we have at the moment and hopefully, preorders will be available shortly.