In an early announcement to retailers, Cinema Epoch is working on 'Samurai Cop' for Blu-ray on November 25.

A deadly "Code of Silence" sweeps through Los Angeles as gang violence erupts,taking no prisoners and leaving no witnesses alive. The police find themselves outgunned and out-sword-ed by Fujiyama's infamous Katana gang. Only one man has the training, expertise and swordsmanship needed to break the code. His name is Joe Marshall (Matt Hannon). They call him Samurai. He speaks fluent Japanese. He was trained by "The Masters" in Japan. Joe must strike a balance between his insatiable appetite for women and his quest to stop the gang violence. Endless obstacles abound; A horny nurse, a sex crazed policewoman, legendary henchmen (Robert Z'dar and Gerald Okamura) and countless petty thugs! Hilarity ensues but not how you might expect in this remastered so-bad-it's-good epic cult-classic. Katana [n]: Japanese sword.

You can find the latest specs for 'Samurai Cop' linked from our Blu-ray Release Schedule, where it is indexed under November 25. 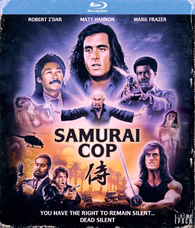