The cult action flick will hit Blu-ray in February. You can pre-order the disc now.

In an early announcement to retailers, Cinema Epoch is preparing 'Samurai Cop 2: Deadly Vengeance' for Blu-ray on February 2.

The long-awaited sequel to the cult classic! It's 25 years later, and Detective Frank Washington (Mark Frazer) is forced to team up with his long estranged partner Joe Marshall (Mathew Karedas) to solve a series of assassinations. In addition to taking on their resurrected nemesis Fuj Fujiyama (Cranston Komuro), the duo must face a new generation of villains including Dogge Sakamoto (Bai Ling) and the enigmatic Linton Kitano (Tommy Wiseau).

You can find the latest specs for 'Samurai Cop 2: Deadly Vengeance' linked from our Blu-ray Release Schedule, where it's indexed under February 2. 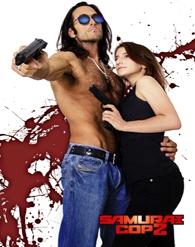