The classic 1981 comedy is headed for Blu-ray in May.

In an early announcement to retailers, Cinema Epoch is working on 'Private Lessons' for Blu-ray on May 24.

The surprise smash '80s comedy that enticed a generation and inspired a legion of imitators makes its first uncensored appearance on Blu-ray. Philly (Eric Brown) is an affluent Albuquerque teenager whose hormones have been trumping his common sense, as he and his best friend Sherman prowl for girls but only find embarrassment. When his father takes a long business trip, and hires comely and exotic Nicole Mallow (Sylvia Kristel) as the new housekeeper, he finds himself unable to contain his attraction to the alluring woman, and is shocked to discover she's quite willing to indulge his wildest fantasies! But all the while, the family's slithery chauffeur Lester (Howard Hesseman) is watching everything, with a plan to take advantage of Eric's budding passions.

Specs have yet to be revealed, but supplements include: Original Theatrical Trailers; Audio Commentary with director Alan Myerson, writer Dan Greenburg, and actor Howard Hesseman; and Comedy Commentary with Marc Edward Heuck (Beat the Geeks), Gariana Abeyta (Out of Print), and Jackson Stewart (Invasion Roswell).

You can find the latest specs for 'Private Lessons' linked from our Blu-ray Release Schedule, where it is indexed under May 24. 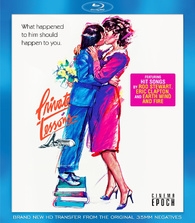