The long lost 1960 thriller will be heading for high-definition in October.

In an early announcement to retailers, Cinelicious Pics says 'Private Property' will be available on Blu-ray on October 11.

Director Stevens, who died in 1998, was a protégé of Orson Welles, and went on to create the classic sci-fi series "The Outer Limits" (1963 - 65), and direct the wonderfully-weird supernatural feature Incubus (1966) starring William Shatner. Private Property was Stevens' first feature as director.

Private Property begins as two homicidal Southern California drifters (played to creepy perfection by Warren Oates and Corey Allen) wander off the beach and into the seemingly-perfect Beverly Hills home of an unhappy housewife (played by Leslie Stevens' real-life spouse, Kate Manx). Shimmering with sexual tension and lensed in stunning B&W by master cameraman Ted McCord (The Treasure of the Sierra Madre, East of Eden), Private Property is both an eerie, neo-Hitchcockian thriller and a savage critique of the hollowness of the Playboy-era American Dream.

Warren Oates delivers his first great screen performance here as one of the murderous vagabonds, years before he emerged as one of the finest character actors of his generation; his bizarre, voyeuristic Lennie-and-George relationship with the underrated Corey Allen (James Dean's hot rod rival in Rebel Without a Cause) is fueled by a barely-suppressed homoeroticism. Shot almost entirely in the Beverly Hills home where director Stevens and lead actress Manx lived at the time, Private Property has a deeply unnerving autobiographical feel to it. (Manx tragically committed suicide several years after the film opened.).

The Blu-ray/DVD combo will be a limited edition of 3,000 units and will feature a NEW 4K restoration from previously lost film elements rediscovered and preserved by UCLA Film and Television Archive and supplements will include: NEW video interview with Still Photographer and Technical Consultant Alex Singer; NEW essay by Don Malcom; and U.S. theatrical trailer.

You can find the latest specs for 'Private Property' linked from our Blu-ray Release Schedule, where it is indexed under October 11. 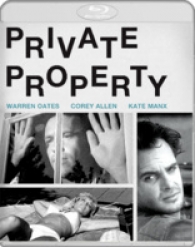