The Blu-ray double feature will hit Blu-ray in March.

In an early announcement to retailers, Cinelicious Pics says 'Jane B. Par Agnès V./ Kung-Fu Master!' will arrive on Blu-ray on March 8.

Jane B. Par Agnès V. - "I'll look at you, but not at the camera. It could be a trap," whispers Jane Birkin shyly into Agnès Varda's ear at the start of Jane B. Par Agnès V. The director of Cleo From 5 to 7 and Vagabond once again paints a portrait of a woman, this time in a marvelously Expressionistic way. "It's like an imaginary bio-pic," says Varda. Jane, of course, is the famed singer ("Je t'aime ... Moi non plus"), actress (Blow Up), fashion icon (the Hermes Birkin bag) and longtime muse to Serge Gainsbourg. As Varda implies, Jane B. Par Agnès V. abandons the traditional bio-pic format, favoring instead a freewheeling mix of gorgeous and unexpected fantasy sequences.

The film is newly-restored from the original 35mm camera negative, a process overseen by director Varda herself.

Kung-Fu Master! - A lovely, bittersweet companion piece, Kung-Fu Master! has nothing to do with martial arts - the film's title comes from an arcade video game played obsessively in the film by a teenage boy, Julien (played by Varda's real-life son with husband Jaques Demy). Jane Birkin delivers one of her finest performances as a lonely 40-year old woman who finds herself falling in love with the 14-year old Julien - but is it romance, or a desperate attempt to turn back time in the face of middle age? A real family affair, Birkin's daughters, Charlotte Gainsbourg and Lou Doillon, her child with well-known filmmaker Jacques Doillon, also appear in the film.

Long unavailable in the US, the film has been newly-restored from the original 35mm camera negative.

Specs haven't been revealed yet, but supplements include: Video interview with Agnès Varda by Miranda July and Essay by Sandy Fitterman-Lewis.

You can find the latest specs for 'Jane B. Par Agnès V./ Kung-Fu Master!' linked from our Blu-ray Release Schedule, where it is indexed under March 8. 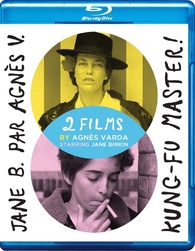